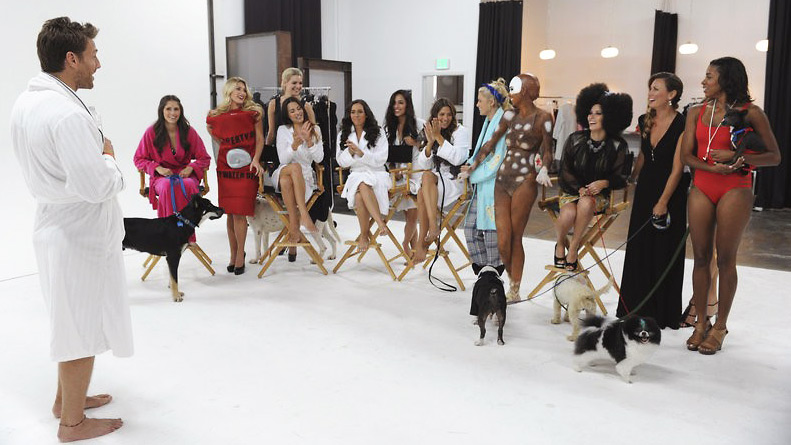 We’re finally back in full swing here at GRTFL headquarters, as 2014 has brought an onslaught of lowbrow programming highlights. Currently in the rotation: Vanderpump Rules, The Real Housewives of Atlanta, Shahs of Sunset, Bad Girls: All Star Battle, Blood Sweat and Heels, Top Chef, Love & Hip Hop, Mob Wives, and a couple of others that even I’m ashamed to admit I watch.

But fear not. Even with all this deliciousness going on, GRTFL will remain heavily focused on the two shows in our scoring rotation: The Bachelor and the surprisingly captivating Real World reboot. So, as always, we made up some dumb rules:

Now, it’s time for the scores:

I had Victoria pegged to go far. I thought her South American heritage and hotness would propel her through the early rounds and into an eventual fantasy suite coitus-off with Andi the Hot Lawyer. I did not see Victoria getting slammerfaced, coitusing a rooftop pool, locking herself in a bathroom stall, and getting the ol’ “I don’t even think it would be right to go through the rose ceremony, you should just leave now you crazy bitch” from Juany Pabs. Let me break down the breakdown:

This week’s group date was a photo shoot for the Best Friends Animal Society calendar. Each woman received a semi-slutty outfit, a dog to partner with, and instructions on how to sex it up with Juany Pabs; these instructions came from a man who may or may not be a human-size Smurf who accidentally wiped off some of his flesh-colored makeup: 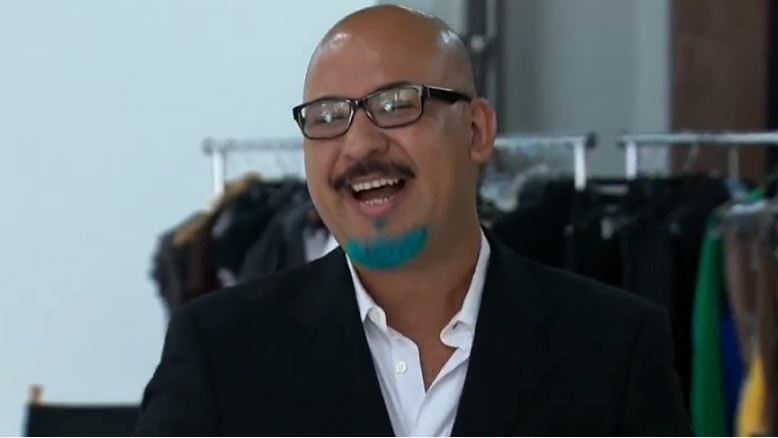 Victoria and Chantel had to share a shoot, which was lifeguard themed. So, naturally, they used the opportunity to kiss and dry hump Juany Pabs: 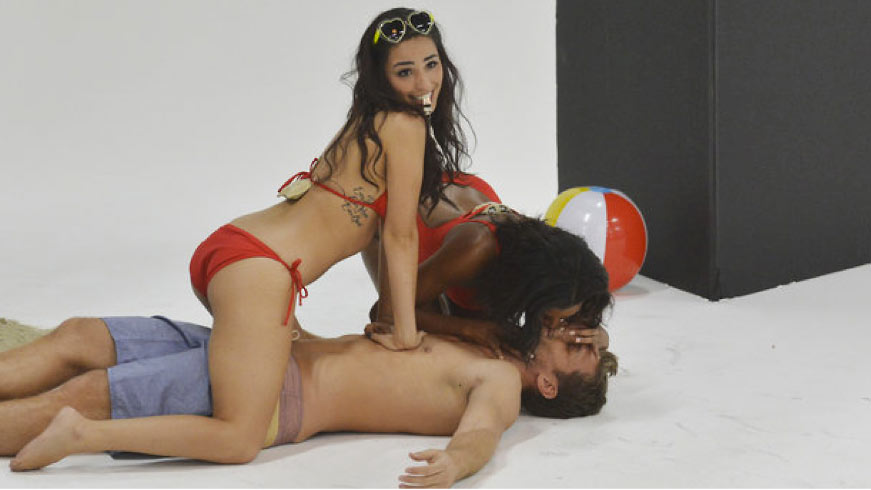 Note the red bikini, the straddling, the attempt to perform the Heimlich maneuver, and the general lack of tact, because all will play a key role in the events to come. Also note the lack of, you know, dogs. I’m not sure why there aren’t any dogs in this shot for the dog calendar, but I’m not one to question the creative prowess of the Smurf Man.

Phase 2: “Maybe You Should Slow Down”

The thing about the group dates is that the second the daytime activity ends, there’s a procession line to get “one on one” time with Juany Pabs. This can be a source of anxiety and stress for those vying for ForeverLove. This group was no different. Victoria decided to ease the tension with a drink: 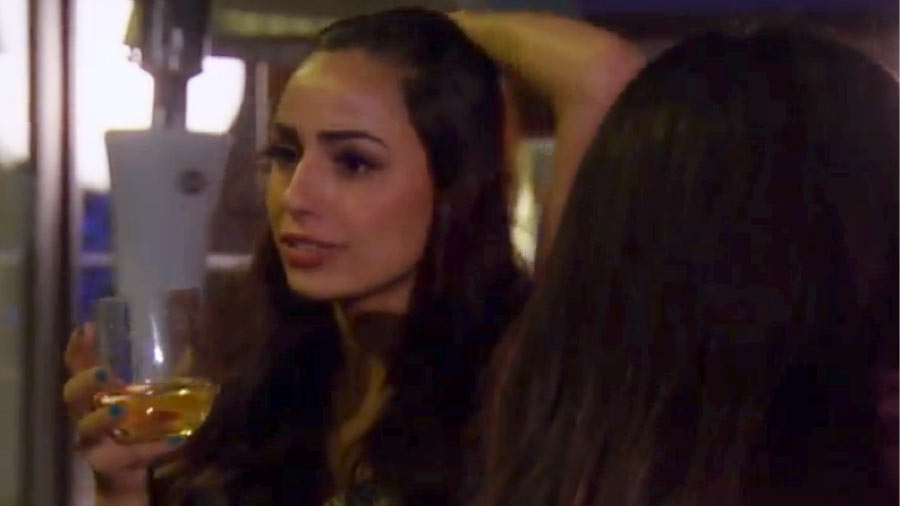 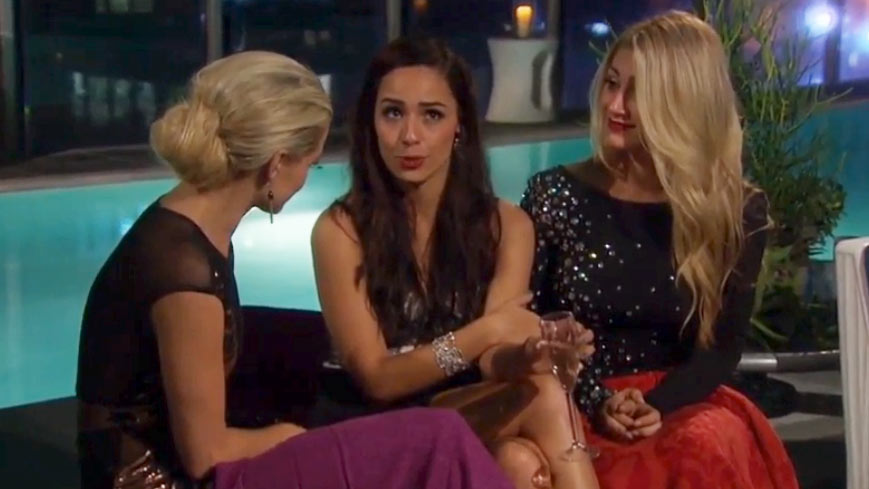 Then Nikki attempted to stage an intervention, pulling Victoria aside and issuing this warning: “I think everyone thinks you’re a little hammered and crazy right now.” Victoria, slammered (15 points), wasn’t swayed. She replied with some bullshit about how she wasn’t drunk, that she’s just fun, and that Juan Pablo loves fun.

Victoria didn’t tone it down after Nikki’s warning. Instead, she doubled down. She immediately found the red bathing suit she still had (had stolen?) from the photo shoot and decided to take a dip in the water/attempt to coitus it. I told you the red bikini would come back into play: 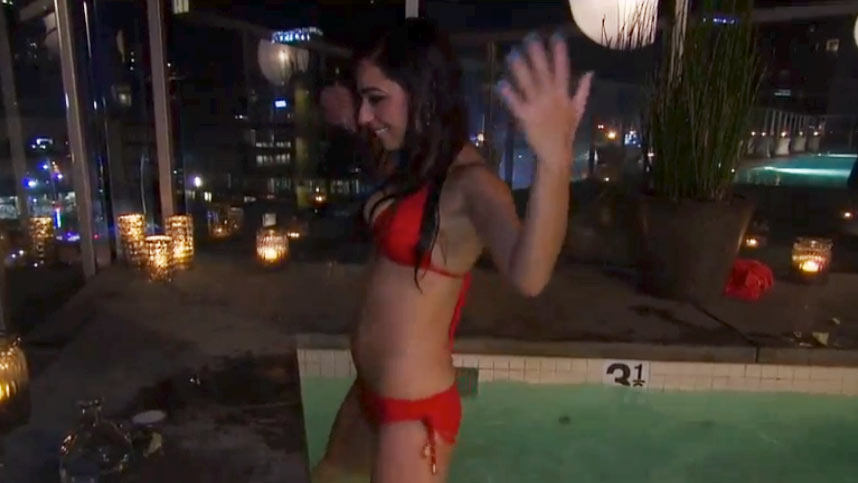 Trust me, she’s humping the pool in the above picture. This is when the producers started leaking little drops of life lessons from an interview she’d done earlier that evening. Some highlights:

• “If Juan Pablo was my man, I would straddle him every day. Because that is what life is about — straddling people and things.” (I told you the straddling would come back into play.)

• “Juan Pablo is my boyfriend. Today I gave him the hymen maneuver.”

• “If you do the hymen maneuver to someone who is laying down and dying, you are going to end up straddling them.” (Told you the “hymen” maneuver would come back into play.)

She wasn’t kidding. SHE THINKS IT’S CALLED THE HYMEN MANUVER. She also thought that it was a good idea to slammerwalk over to Juan Pablo, look at him, and then run to the bathroom.

Victoria shut herself in the bathroom for hours and cried her face off (5 points): 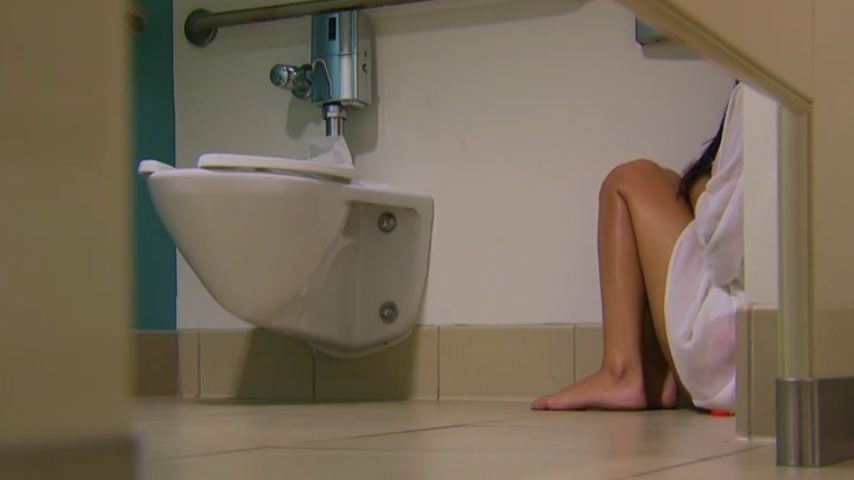 There are two explanations for why she would do such a thing:

1. Even she was confused and concerned by her own behavior, and she was worried that she’d caught some sort of mutant rabies virus from one of the dogs and decided to separate/sacrifice herself for the good of the group.

Phase 5: The Morning After

The next day, Victoria got a visit in her hotel room from Juany Pabs: 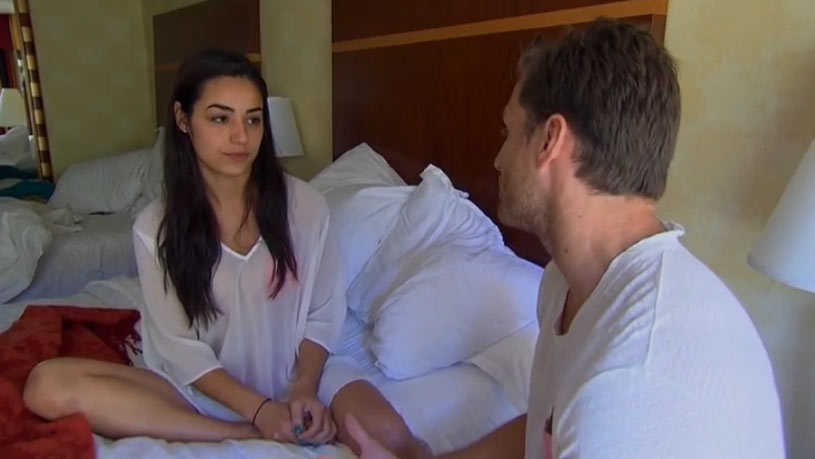 She looked great, apologized, and totally thought she was going to get another shot at being Juany Pabs’s Wifey Pabs. She was wrong (15 points). He dumped her right there, citing the fact that he has a, you know, CHILD, and that women who get slammered, attempt coitus with a pool, and quarantine themselves are not exactly what he’s looking for in a step–baby mama.

This season of Real World has been amazing. So amazing, in fact, that this week’s GRTFL Top Five is the Top Five Most Shocking Things That Have Happened on Real World So Far, listed from “That happens every season, though” to “Is it legal to film that, let alone televise it?”

5. Cory got in a fight with a bunch of strangers, then ended up being physically dominated by Arielle, the female model in the house (50 points).

4. They demolished the fourth wall.

3. This season is actually interesting, and I can’t wait for the next episode (it’s been a while).

2. Cory and Jenny had sex in bear suits on the second night.

1. Ashley committed assault with intent to injure, via hamburger.

This week, Cory and Jenny fell just short of topping their bear-suit romp with some solid semi-public shower sex (25 points). Quick aside: Am I the only one who sees Robin from The Challenge every time I look at Jenny? I can’t be.

Thus far on The Bachelor, Lucy has displayed no personality beyond “Sure, I’ll get naked, no problem.” Here she is, chatting in the hot tub with the rest of the girls: 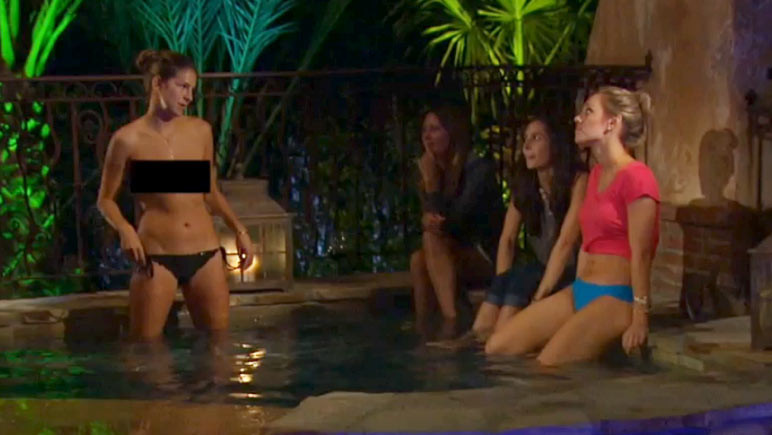 And here she is at the photo shoot: 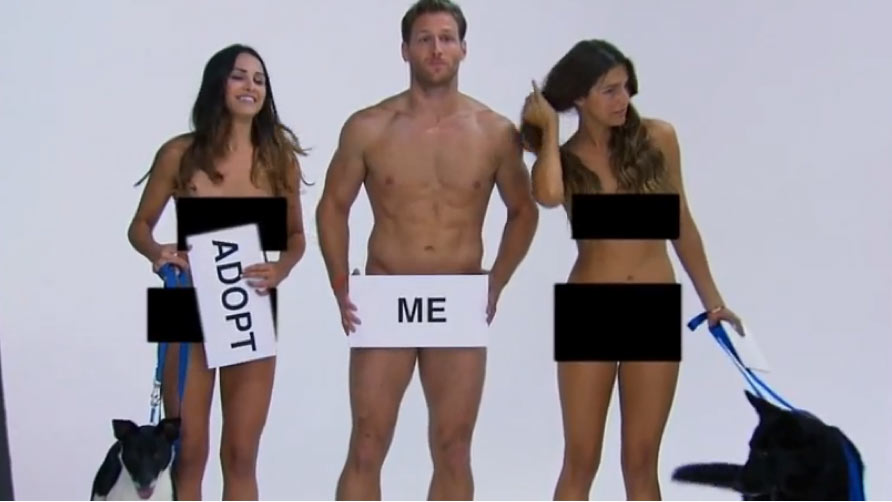 This isn’t anything new for Lucy, either. It only takes a quick Google search to learn she’s dating some dude from Snapchat, has a ton of pictures on the Internet that she should have sent via Snapchat, and, most shockingly, CLAIMS SHE DOESN’T DO DRUGS.

Lucy, if you really don’t do drugs and this is your natural state, don’t tell anyone that. It does you no favors.

In stark contrast to Lucy, we have Andi the Hot Lawyer. She’s the one wearing a piece of cardboard in the above photo. Andi the Hot Lawyer is, you know, a lawyer. When she learned that her “costume” for the shoot was haute couture de chez Kinko’s, she was concerned about how it would affect her reputation in the courtroom. Faced with the choice of jeopardizing her career or losing the 4 percent chance she has of getting engaged to a man she doesn’t know who barely speaks English, she naturally chose the latter (20 points). Insert cheesy “all rise” joke here.

Jamie is one of those people who on the outside is all tattoos, gauges, bartender, and “I went on tour with a rock band,” but on the inside is all “Ah. Mah. Gah. Thom and I cuddled, I think this is going somewhere.” There is nothing worse than a sheep in wolf’s clothing. Once she and Thom actually went somewhere (5 points), did this punk-rock chick play it cool, not make a big deal out of it, and let things progress naturally? No, she freaked out every time he started talking to another girl and physically separated them like she was Mills Lane: 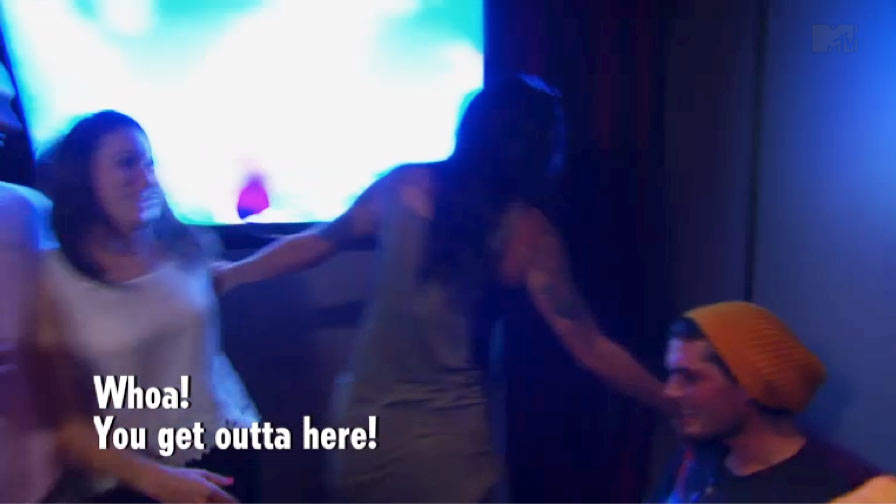 This relationship has a zero percent chance of surviving to the fifth episode. Zero percent.

Ashley had an off week, only totally disrespecting one of her roommates (5 points). But who cares, CHECK OUT ARIELLE’S DANCE MOVES!

I call this one “The Electrocution”:

And I call this one “Life Cycle”:

The transition from broken sprinkler to floor hump to soccer volley to hat wave is flawless. I think Arielle may be an Obama. She’s perfect.

She made out with Juany Pabs (5 points), but which one is she again? Oh yeah, she’s the one whose dad died nine years ago, so I told myself I wouldn’t make fun of her for still being hung up on it. OK then, moving on.

Rodney Stuckey’s baby mama cried this week and proved that the trusted “All you have to do is have an emotional breakdown and you will get some personal time with the Bachelor” technique is still a solid play. I honestly think her background as an NBA dancer and Juan Pablo’s as a party promoter make her more of a “sports consultant” than he is.

Chantel cried when she didn’t get a rose. I’d go into detail about why she was sent home and the oddly consistent early exits of African American women on reality shows, but my editor would just edit it out. #DontGetFired

Thom scored points for kissing, but none of that matters when you have this:

AND DON’T FORGET THIS:

Next week, Ashley returns to being the Hottest and Messiest of Hot Messes, Juan Pablo plays soccer, and, if all is right with the world, Arielle blesses the species with some more of her dance moves. Until then.

The 'Parenthood' Cry of the Week: Love and Pancakes