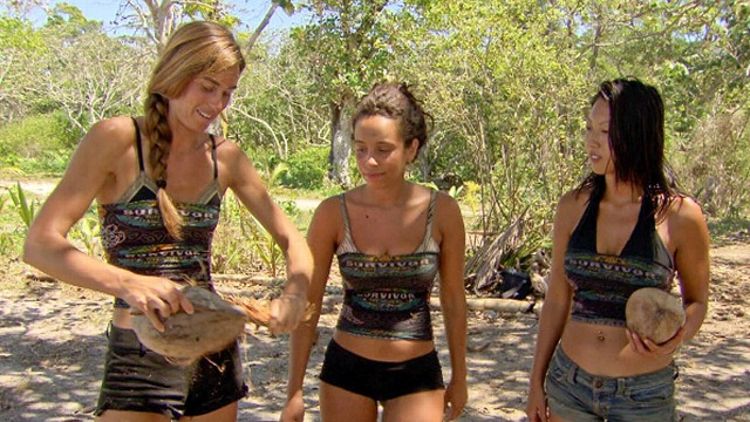 The gynocracy that is this season of Survivor has certainly spruced up the GRTFL proceedings. This week Kim was casting spells like she was Medusa, Chelsea was poppin’ champagne like she was Rick Ross, and Tarzan was wearing Kat’s panties on his head and muttering crazy talk like he was a raving, fetishist loonypants. In actuality, Kim is not Medusa and Chelsea is not Rick Ross, but Tarzan is most definitely a raving fetishist loonypants. But before we play with all our new Survivor toys, we must not neglect our old friends — the Louboutin’d ladies of Basketball Wives, who have been putting up big GRTFL numbers since before anyone on Survivor cracked their first coconut.

We first turn our attention to Royce, baby mama of the Orlando Magic’s Dwight Howard, girlfriend of Tampa Bay Buccaneers’ Dezmon Briscoe, and tormenter of her father …

Royce (Basketball Wives, Jacoby), 10 points: Each season, Royce gets infatuated with a new boyfriend and drags him out for some sort of meal/evaluation/rejection with her father. This season’s was her third go ‘round on Basketball Wives, so Royce’s Pops has had plenty of practice getting his condescending disapproval game just right:

Oh no, Dezmon, what are you doing, dude? I may have misinterpreted this exchange, but in an attack against your lady did you just side with her father? The first time you met him? Are you a manipulative super-genius committing relationship suicide or just not that intelligent? If only there were some sort of mental aptitude test that Dezmon had taken from which we could find out the answer to that question … hmmmmmm … oh wait, there totally is! During the draft, potential NFL players take the Wonderlic test. Let’s Google Dezmon’s score. [Searching.] Here it is! 19 out of 50! Not terrible, but below the average humanoid score of 21.

Anyway, Royce’s father’s attacks on Royce’s role in the relationship led to Dezmon’s support of those attacks, which led to an argument between Royce and Dezmon (5 points), which led to Royce crying (5 points), which led Dezmon to send sexts to his baby mama about her “azz cheeks,” which led to those sexts being splashed all over mediatakeout.com. So, in summery: If you’re in a relationship, just support your boy/girlfriend in every argument no matter what — or you will soon be splashed on the Media TakeOut Summer Jam Screen. You’re welcome.

Alicia (Survivor, Simmons), 5 points: Sometimes people’s delusions can be adorable. Like when Alicia announced that she was “in control of this game” (5 points) when the person obviously controlling this game is Kim. Who is Kim? Oh, nobody special. Just a single bridal shop owner who may or may not shoot hypnotizing lasers out of her angel eyes.

If you don’t watch Survivor, this is how a season typically works: First, all the good-for-nothings are voted off, then the alpha male bros, then the supposed ringleader gets backstabbed, and then somebody who has been “under the radar” the whole time wins the whole thing because they never pissed anyone off. This season they skipped the “backstab the ringleader” part. It may be because the whole gender-war conceit has the ladies sticking together, it may be because they aren’t smart enough to follow the established pattern, and it may be because the ringleader, Kim the Single Bridal Shop Owner Who May or May Not Shoot Hypnotic Lasers Out of Her Angel Eyes, is shooting hypnotic lasers out of her angel eyes. It’s unclear.

What is clear is that around the camp Kim runs things with Popovichian tact and authority. Sabrina has tracked the source of her power to her baby-blue eyes: “Kim has this amazing ability to look almost through you and say, ‘Yeah, I’m with you,’ and it’s believable.” Someone vote this wizard off already! Her reign of this season’s gynocracy is so thorough that the GRTFL top five this week are Kim’s “I am running shit and I know it” quotes counted down from “I could still see her getting voted off” to “I am going to write her in on the next presidential ballot”:

5. Kim Quote: “Setting yourself up in a position to play both sides is brilliant. But it just takes one conversation between people on each side to put it all together and then you’re the first person gone because nobody trusts you anymore.”
Hypnotic Laser Eyeballs Set To: Humble but powerful.

4. Kim Quote: “Sometimes I am scared of myself; I can’t even tell when I am lying anymore.”
Hypnotic Laser Shooting Eyeballs Set To: Self-deprecating yet condescending.

3. Kim Quote: “As long as their votes are split, it doesn’t matter. I don’t even think they are even questioning me. I don’t think they ever have.”
Hypnotic Laser Shooting Eyeballs Set To: In control and confident.

2. Kim Quote: “To just go and be waited on and to feel so pampered, I started to remember what I am about.”
Hypnotic Laser Shooting Eyeballs Set To: Intimidation via revelation.

1. Kim and Chelsea Exchange:
Chelsea: “Wow, I love champagne.”
Kim: “Do you love that?”
Chelsea: “I love you.”
Kim: “I was talking about that [points to a pastry Chelsea was eating].”

Kat (Survivor, undrafted), 5 points: Kat was voted off last week, but she cried this week while part of the jury, and I kind of love her, so I am writing up her points. Deal with it.

Kat was a little backstabbed last week and A LOT upset about it. She walked off, unlit torch in hand, crying and wailing her disappearing ass off. She was so distraught that she inspired me to go down the Internet video hole that is the Survivor: Life at Ponderosa. This is where you watch the cast after they get voted off, freak out when they look at themselves in the mirror, and binge eat. It really isn’t all that entertaining, but Kat’s exit was so dramatic I had to check her out. I’m glad I did.

She was so distraught by being voted off that they brought in the “Survivor Psychologist” to talk to her. First off, there’s a Survivor psychologist? What? This has to be the easiest job on the planet. I’m sure the Survivor psychologist spends most of her days listening to sound men endlessly bitch about absentee fathers, but this time she had to deal with a real Survivor-induced mental breakdown. In the middle of Kat’s freakout, the Survivor psychologist asks, “Who do you feel the most let down by?” and Kat shrieks, “KIIIIIIIIIIIIIMMMMMMMMM!!!!!!!!” I guess the hypnotic effect of those laser-shooting angel eyeballs only works within a certain radius.

Oh yeah, I almost forgot why I added Kat to the scoring in the first place! While she was busy getting Freuded at Ponderosa, Tarzan decided to throw on Kat’s pink top and don her abandoned panties on his head like Tupac would with a red bandanna. When Kat came back as part of the jury, Jeff “The Next Oprah“ Probst made a point to mention this act of uber-creepocity — which caused Kat to react the same way she reacts to everything, by crying (5 points). Tarzan, by the way, is a plastic surgeon. So the man that, on national television, will wear your underwear on his head the second you leave the camp is also the man that is going to operate on you while you are out cold. Just sayin’ …

Evelyn (Basketball Wives, Kang), 5 points: You’d think that an engaged couple being adorable and encouraging and an engaged couple being borderline abusive and vulgar are mutually exclusive, wouldn’t you? Well, you clearly aren’t enjoying Basketball Wives’ flying assaulter Evelyn Lozada and Patriots wide receiver Chad Ochocinco. Somehow, they manage to have disrespectful, insulting arguments (5 points) that will leave you saying, “You know what? These crazy kids seem to really understand each other. I think they are going to make it.” Case in point:

Chad [sick in bed]: “You selfish, man. I’m on my bleeping deathbed and you worried about a bleep damn honeymoon bleep.”
Evelyn: “Do you even want to go on one?”
Chad: “Let’s just get married and bleep.”
Evelyn: “You just want to get married and bleep? What is wrong witchu?”
Chad: “We’re not getting married, we’re getting hitched. When you get hitched you get stitched, and stitches don’t come apart. Honeymoon? Ain’t no honeymoon. We just need to be together. Bleep that piece of paper, we in it forever.”

What was that? Not disrespectful enough? Fine, then:

Chad: “I am with you for your money. Seriously. I know you always hear about women gold diggin’, I am just going to be straight-up. That is why I am here.”
Evelyn: “You are with me for my money?”
Chad: “Yeah, it’s cause you get so tiring when you have such a merry-go-round, a plethora of women, you know? And they don’t be havin’ nothing. Imma have to dish out in order to keep them and deal with them.”
Evelyn: “Why, ’cause you were messing with bum bitches?”
Chad: “No. There is only so many that are really fortunate that can really do for you.”
Evelyn: “I can do for you! I can pay this mortgage, I can pay the bills … ”
Chad: “I know. And that is why I’m here, I just want to take it.”

Tami (Basketball Wives, Simmons), 5 points: Tami can’t go four episodes without spazzing out on a chick. Doesn’t really matter who, where, or why — it just has to happen. The same way that you have to sleep in order to maintain your internal balance, Tami has to dress a lady down to maintain hers. This week’s victim was Kesha (5 points):

Now Tami is charging Kesha with a count of the ol’ “Talking about people behind people’s back.” While I was considering the merits of this charge, I came to the following realization: EVERYONE TALKS ABOUT PEOPLE BEHIND THEIR BACKS! Seriously, I don’t care how righteous you live your life, how strictly you adhere to your moral code, you talk behind people’s backs. You do. Admit it. It isn’t right, but it’s human fucking nature. Now, Tami isn’t cutting Kesha any slack, because she hasn’t come to this conclusion yet, but one day she will as she is taking anger-management classes and her metal health is a work in … well, I’ll just let her tell it:

Tami: “But you know there is a lot of stuff that happen in my life and that is why I am so mad about people violating me and my personal space and just, you know, learning how to trust people. It is just a work in process for me.”

Tami, I should be a bigger person and not mention the meaningless inaccuracies in your speech. I guess we both are works in process.

Kesha (Basketball Wives, Kang), 5 points: Kesha got yelled at (5 points), but who cares? Check this out:

Kesha to Evelyn and Shaunie: “How did y’all meet?”
Evelyn: “In Miami. Our dudes played on the same team at the time. Won their little championship together. You know?”
Kesha: “Does everybody get rings, including the wives?”
Evelyn: “Yeah, we get rings.”
Shaunie: “I got four of them bitches.”

Wives of the players get championship rings?

Sorry, I have to go now, I am going to spend the next four hours studying balleralert.com so I can school my female friends on how to get an NBA championship ring. So much easier getting one this way than, ya know, being a freakishly tall, athletic, determined superhuman.