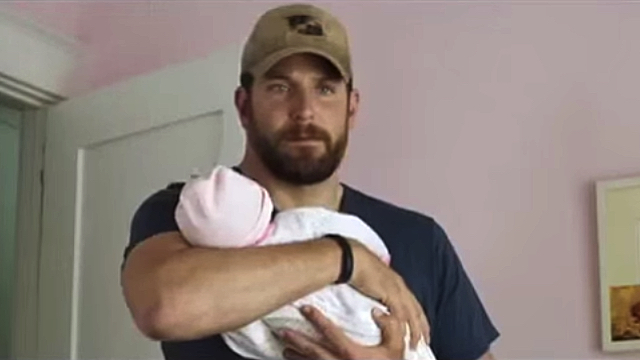 American Sniper is, by almost any metric, a gargantuan success. Last Thursday morning, it capped off an incredible limited-release run at the box office with six Academy Award nominations, including Best Picture and Best Actor for its transformed star, Bradley Cooper, who famously put on 40 pounds to better embody subject Chris Kyle’s imposing physicality. The film followed that impressive awards haul with a record-setting weekend at the multiplex as it finally entered wide release, pulling in a jaw-dropping $107.2 million over the four-day holiday frame. Initially dismissed by Oscar pundits chasing every hot, new, gimmicky, filmed-over-12-years thing, American Sniper is now a force to be reckoned with.

This impressive stretch has not been without its controversies, however. We speak, of course, about the painful disparagement of Cooper’s previously unheralded costar, the “fake baby” scene partner that director Clint Eastwood used instead of an actual infant, which has dominated the online conversation about American Sniper this week and culminated in yesterday’s New York Times story on the hubbub. Though the baby had been chattered about as a Twitter punch line for some time, the sudden attention of The Gray Lady means this matter can no longer be safely ignored by the Oscar-watching world. One voice that has been conspicuously absent from the crescendoing chatter, however, is that of the “fake baby” itself. And so in the interest of getting her story out there, we rang up Bedtime Brenda on her Fisher-Price MyFirstMobile phone to talk about the whirlwind of unwelcome attention.

Thanks so much for agreeing to speak with us today. How are you feeling?

I’m just waking up! I’m so very sleepy. I still have my footie jammies on. Of course, I’m always wearing these footie jammies, but they’re available in a variety of fun colors. Are you my daddy?

This must have been a very difficult few days for you, with all the “fake baby” talk about your role in the movie.

It hasn’t been very fun! I like fun! It’s hurtful to be called a “fake baby.” I’m not a fake baby! I’m a real live synthetic actor now. I have an SAG card. “Fake baby” is very dismissive for all the work I’ve put in. I pay dues now like everybody else.

I apologize. We won’t use that term again.

Do you think the entire controversy is overblown?

It’s crazy. The writer of our movie even explained what happened. The two human babies flaked out on the job. Mr. Eastwood saw I was ready to go and put me in front of the camera. He likes to work fast, so it was probably a blessing in disguise. It’s very hard to work with babies, and there are so many child protection laws to deal with. Whereas I’m just ready to go right out of the box. It’s a miracle people ever use human babies, to be honest. Super high maintenance.

How did Clint Eastwood pick you? Presumably there was some kind of selection or casting process involved.

This is another thing that’s been hard to deal with. It’s not like Mr. Eastwood didn’t have choices. The propmaster gave him options. Did he pick Patty the Cabbage Patch Kid? No. Did he pick the Tickle Me Elmo with the giggling box disabled? No, he’s a sillypants. He went with me. He saw something in me. He put me on camera because he believed in me. Daddy Bradley’s a producer, he had a say. There was no mad rush to Aisle 14 at Toys R Us to grab the first doll they saw. They were prepared. I was vetted.

How do you feel about your performance in the film?

I’m too young to watch big-girl movies, daddy! But I can tell you my experience on the set was incredible. People have given Daddy Bradley a hard time for wiggling my arms so much in that scene. But he’s just an incredibly generous actor. He saw I needed help. I’m not one of those fancy dolls with motors. I can’t move by myself! He did whatever was needed to get the performance.

And he feels terrible about this whole thing. He wishes he had more time to prepare. He told me that if he had even a clue the human babies weren’t going to get the job done, he would have slept on the floor of an American Girl store for five weeks to get ready for our work together. Daddy Bradley is the best!

Do you find the sudden wave of negative attention following the Oscar nominations suspicious at all?

I like to see the best in people, daddy! But it does seem a little weird this is happening right now. Follow the money. Does it lead to Boyhood? I can’t say, I’m just a baby, I haven’t been through this before. But those guys are out in public like, awwww, shucks, thanks for nominating us, we’re just happy to be here making our little movie. It takes some kind of psychotic drive to make one thing for 12 years. That’s a very long time; you can tell they really want this. You just hope they’re not playing that dirty game to win at all costs. That Ellar Coltrane has some very scary, dead eyes! Who knows what he’s capable of? Was he even in that movie the whole 12 years?  Who can say, daddy!

Given all the attention on your performance, do you feel snubbed because you weren’t nominated?

Snubbed is such a funny word! But no. We do this for the art, not the shiny prizes. Well, we did on American Sniper. Who knows what motivated those mean people on Boyhood! Ethan Hawke seemed like a pretty bad daddy!

I’m so very sleepy now. Is it bedtime?

I’ll let you go. Thanks for speaking with us.

Thanks for calling, daddy! Bedtime for Brenda! Voting closes February 17!