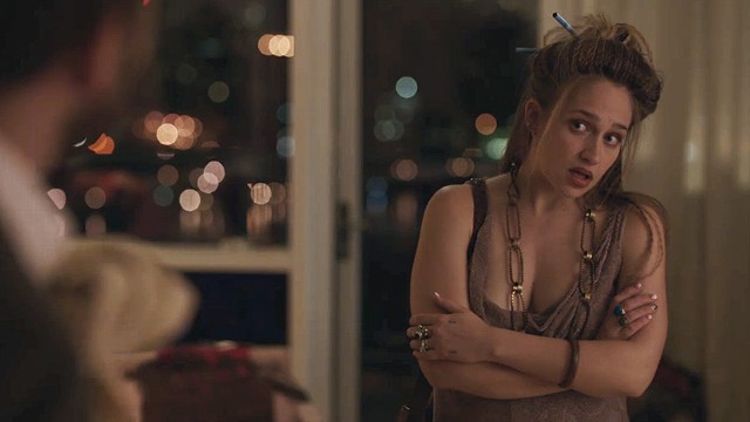 Jessa finally created a problem that she couldn’t blag her way out of with charm and good looks. Her narcissistic posh charm was on trial at dinner with husband Thomas-John’s parents, resulting in a split verdict. While she was able to flirt her way (as always) into Thomas-John’s dad’s good graces, it was at the expense of alienating his mother, who was not here for Jessa’s bullshit. Thomas-John was also flustered, as he fully realized over his Peter Luger meal from hell that Jessa was never going to do anything besides precisely what she wants to do, ever.

Jessa normally passes off her self-absorption as a take-charge attitude, and her unfair advantages as lucky happenstance. Those delusions were systematically dismantled by her husband’s mother and then Thomas-John himself. Jessa’s lack of desire to work hard (or at all on anything besides what interests her), which she has always spun as bohemian, is called out for what it is: spoiled. She accumulates experiences as if they were currency, and uses people as if they were props. When Thomas-John says they’ll make a movie about Jessa, the first thing I thought of was John Schlesinger’s Darling, which stars Julie Christie as a magnetically alluring blonde British model who socially climbs compulsively and ends up alone, having alienated everyone that ever loved her. Intense sexual chemistry with Thomas-John has taken them this far, but the relationship has to become deeper than that, or it’s bound to die. Jessa is already tired of Thomas-John, but she might not be capable of a real relationship with any man until she develops empathy. Her most reliable romantic connection is with Hannah, who loves not only Jessa’s glimmering surfaces but her unsightly insides, too. After her coke-fueled adventure time erupted into total chaos by the end of the night (how could it not have?), Hannah was trying to play it more low-key this week with a dinner party at home. I kind of wanted the episode to open with Hannah sitting in the middle of her empty apartment snorting a huge mountain of blow, having pawned all of Elijah’s ex-boyfriend’s furniture for drug money. Instead, her domestic fantasy of cooking for her friends morphs into a sitcom nightmare, like watching a Friends Thanksgiving episode overlaid with Roman Polanski’s Repulsion. With every attempt to make conversation and small talk, Hannah inadvertently opened up new schisms. If there was a sensitive subject best not to touch on, she swerved right into it. After realizing her errors a little too late, she made a face like this: O____O, which was also the face she made when she tasted her own terrible Pad Thai, and the face I made when she declared that snot in the bath was gross but pee was not. Hannah Horvath, you’re the Charlie Browniest. When does Shoshanna go to class? Maybe she’s at Gallatin and majoring in dating a guy who accidentally lives with you. What kind of college student/Sex and the City fan/human being doesn’t know what a butt plug is? When I was 13, I had to ask a girl at a bar mitzvah to explain “69” to me, but there was no such thing as Google then. Nobody needs be that sheltered now with the Internet available everywhere. It was probably just an excuse to let Zosia Mamet awkwardly over-enunciate “butt plug” as many times as possible. Since Shoshanna is in her first relationship ever, she has no clue what the parameters are, and is only beginning to realize that she could be setting some. Does Marnie really think she and Booth Jonathan are dating, or did she just say that to get Charlie off her face? Marnie likes to see if she can win Charlie from Audrey, but whenever she does, she just tosses him back. Audrey is a perfect rival for her — they’re similar-looking but utterly different, and while Audrey is laid-back, she does have limits, and Marnie likes to test them just for sport. It’s a place for Marnie to funnel all her passive-aggressive anger, now that Hannah’s cut her off. Marnie uses Charlie for an ego boost and sometimes for snuggling, but it’s just a stopgap between potential love interests, while for him it feels like a reaffirmation of what they once had. Whenever Marnie finds out that she can lure Charlie back to her, it makes her have no respect for him, which, in turn, repulses her sexually. Where does Audrey get those headbands? I assumed she made them, or got them five years ago when that sort of thing was still popular (BURN). Audrey’s going to be fine when she leaves Girls world because she has a passion: food. If Charlie drops her, she’ll land on her sandaled feet in no time, peddling her artisanal mustards from a vegan hot-dog truck at Coachella and getting a really weird headband tan. Ray dating a girl over a decade younger than him is a red flag nobody saw until we found out this week that he’s 33. He seemed older, and certainly passed himself off as wiser any chance he got. He has a job and no parents. At least some of his bitterness felt earned, especially if he’s in a position to brush shoulders with Jessa’s chiffon sleeves, and other people who so blithely spend unearned money. There’s no doubt that Ray spends his days at Grumpy’s enviously watching a younger aspiring creative class tapping away on their laptops at screenplays and novels and culture blogs while he makes their coffee and goes home to his car. Ray avoided getting seriously involved with women not because he enjoyed bachelorhood so much as because he couldn’t risk liking a girl who might find out he’s a loser in the eyes of the world. To a 21-year-old like Shoshanna, 33 is an age at which you should definitely be on your life path, which should involve a grown-up apartment without roommates or cockroaches, let alone power-steering. To a 33-year-old like Ray, the idea that you would want or expect anything in your life to be permanent is ridiculous. He knows that the sort of striving the girls are doing is something he was expected to have done in his 20s, and that he somehow procrastinated for too long and failed to establish himself.

He’s grown very attached to Shoshanna, and that means he can no longer exist solely for himself and his own whims. He has to incorporate her whims, too, which include the possibly fantastical idea that he could become a provider (if just emotionally). It’s probably not a coincidence that Alex Karpovsky’s character in Tiny Furniture was also a couch-surfing mooch who leveraged girls’ crushes on him into temporary free real estate. Ray is a good hustler, but that means he lives on the fly and is afraid of being exposed as a manipulative fraud who can’t really afford to live in New York. He’s quick-witted but has nothing to show for himself except humor.

Maturity Level: Up for Grabs Charlie tried to role-play Don Draper and Rachel Menken on the rooftop with Marnie, but it turned out even less successfully than Don and Rachel’s relationship did. Marnie’s extreme contempt for Charlie is too tied up with her pity for him. She likes banking on the idea that at least one (attractive, eligible, puppyish) person is in love with her, in case others don’t pan out. When Charlie gets kicked, he stays down and thinks it’s his own fault that he got kicked at all. Unfortunately, that’s because it usually is. Ugh. If you put spinach and pecans in a burrito, it’s not a burrito anymore. It’s a wrap, and wraps are disgusting. Who the hell puts mayonnaise on a tortilla? Or thinks that tortillas should be sun-dried-tomato–flavored? Just thinking about wraps for a millisecond makes me feel so grossed out. Now I need to go eat a real burrito (BREAKFAST BURRITOS ARE EXEMPT FROM THESE RULES, OBVIOUSLY). Goodbye Thomas-John, you poor bastard. You got in too deep with the wrong sort of people. Thomas-John might not have even known about Jessa leaving college for heroin rehab until she blurted it out at dinner. I finally figured out what the voice Chris O’Dowd does as Thomas-John reminds me of; Carl Spackler, the gopher-hating groundskeeper played by Bill Murray in Caddyshack. IT’S IN THE HOLE! Thomas-John’s imposing mother was played by Deborah Rush, who played Jerri Blank’s evil stepmother, Sara, on Strangers With Candy. His father was played by Griffin Dunne, who apparently made it out of SoHo after After Hours, but never fully managed to escape from New York.

Warm Bodies, a.k.a. What Tweens Were Doing While You Were Watching the Super Bowl, Won the Box Office