‘Girls’: It’s My Birthday, and I Wanna Sing ‘Rent’ Like It’s the Second Time 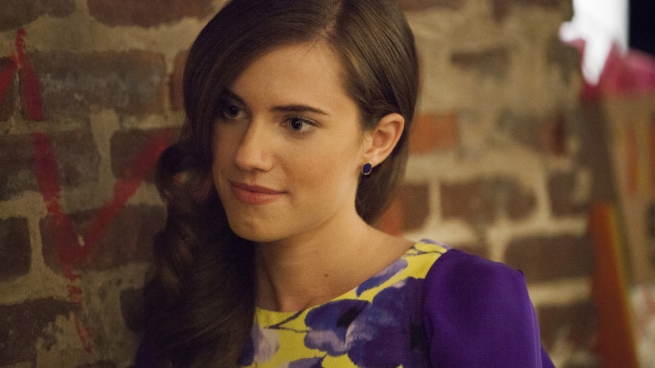 Emily Yoshida: In this episode of Girls, Hannah celebrated her 25th birthday with her friends and her parents. Here are some questions that I have about that:

Rembert Browne: Perhaps this is a symptom of spending ages 22 to 26 in New York City, but nothing about the setting for that birthday party felt weird. I once threw myself a bash in a two-story bar with $15 in my bank account and I didn’t even have to hire that many actors to fill up the room and give impromptu toasts dedicated to “the birthday boy, human for whom I’ve spent many a fun time with.”

So if I can do it, Marnie can certainly do it. And she can easily find bands that typically play in the train station to come play their greatest hits. Don’t stress too much over the details in the party, especially whether the people actually knew Hannah (they didn’t), because any second we’re spending figuring out Marnie’s party-planning prowess, we’re losing precious time in which we should be covering her music video.

I felt like I was watching a really good Girls parody. But it was actually on the show. I think this is Lena making fun of her own characters, which is something I’m all about. The music video was so perfectly bad. Especially that sepia-toned Pic Stitch in which she’s wearing glasses and also leaning up against what looked like a barn.

One of the lyrics is “Philosophy, is the talk on the cereal box, religion…” (which I’m pretty sure is a discipline of study at Oberlin), overlaid with a whispered “religion …” — and that cannot be topped in my mind. Not right now. [Ed.note—Uh, this is a real song, dude.]

I have more to say, but don’t want to hog this entire topic. I promise I’ll eventually come back to your questions, especially thoughts on Hannah’s parents. And what, even, is Marnie.

Yoshida: The reason why I ask what Marnie is (even), is that I feel like if I had a better grasp on the root of her general deal, I’d find the video funnier. I get that she likes attention and that she’s forcing her own grown put-togetherness before it’s really a thing, but if I knew why she was doing that it’d probably be a more cohesive funny. It’s not just the Charlie breakup making her go all Goop on us, because she was like that from the pilot episode. On all your great sitcoms (a genre that I know Girls is trying to subvert but that has basic bones the show could probably benefit from taking advantage of), some of the funniest dynamics come from rather unfunny underlying motivations of the characters — Sam Malone’s sobriety leads him to self-medicate with the company of hotties, and half of the plots of Frasier stem from Niles and Frasier’s deep-seated insecurity and need to earn their dad’s love. (2-for-2 on Frasier references. Great work so far here.) Marnie’s video was obviously ridiculous and was a commendably accurate depiction of the kind of bad homemade vanity videos you often trip over on late-night YouTube binges, but I wish I had learned more about Marnie before she went into total cartoon mode.

Back to the bar real quick, though, and then I promise I’ll drop it: In theory, I get that when you’re in your twenties, a lot of randos will show up anywhere they heard there would be free booze. That’s just a basic law of physics. I’ve never had the means to foot the bill for an open bar, so I’ve had spottier luck, mostly depending on what neighborhood the party is taking place in and whether there’s free parking, the true litmus tests for friendship in L.A. (Let’s not talk about my 24th birthday, which nobody came to, possibly because I had it in a not-cool bar downtown, or possibly because I used this as the lead image for the Facebook invite.) These train-station bands you speak of, though, that’s a phenomenon I’m unfamiliar with. The things I’ve heard about the differences between New York and Los Angeles are true!

Browne: Am I supposed to be treating Girls like a comedy? Or a sitcom, even? I barely even had it in a genre, with the closest probably being “historical magical Y.A. realism fiction.” I mean, I’ve laughed plenty of times, but I’ve also chuckled during Law and Order: SVU. This changes everything for me, Girls being a comedy, instead of simply a show that I watch because it’s enjoyable to watch and allows one to insert themselves into scenes when the opportunity arises.

That’s why I loved Marnie’s Rebecca Black impression, because I actually laughed out loud. It was the first moment of the show’s history when something was intentionally put in to make me laugh, and then I actually laughed. And, due to my lack of understanding of this show, I was caught off guard. Because I didn’t know this was a laughing show. I thought it was just a “yeah, I know, right?” show. So where it fits within the Marnie arc, I have no idea. I viewed it, and look back on it almost like a flashback montage from 30 Rock (specifically, the time we learn Elizabeth Banks’s character used to do Overshoppe.com commercials in that horrible Maryland accent).

Before we move on to Adam’s sister, a few thoughts on Hannah’s parents. They are very cute, and I am very excited to wear really hip outfits with my old wife when we go into the city for our daughter’s 25th birthday party, and dance alongside her and her significant other, while appreciating the genetic gift of ribbon dancer-like cavorts and gyrations.

But we should push through. Because, as I hinted, this episode was bigger than simply it being Hannah’s birthday. This was really a Ray episode featuring GABY HOFFMAN.

Yoshida: Oh dude, Gaby Hoffman. So, it looks like Caroline’s coming back next week? Which is great, because last week on the Girls in Hoodies podcast, Molly Lambert told me that Jemima Kirke used to be BFFs with Paz de la Huerta when they were growing up on the Lower East Side, and now I want it to be revealed that Gaby is playing some kind of Paz-like childhood friend of Jessa’s who will reconnect with her via the world-uniting power of Hannah and Adam’s love. This show needs a Paz!

I liked how Ray was just totally not engaging with her. That felt true to where Ray’s at in his life — you get to a point when you’re no longer automatically swept up by every bonkers-seeming person who walks by. I also appreciated Ray’s scene with Shoshanna and the honest depiction of what it’s like to not necessarily want to be friends with all your exes. Ray’s going to some dramatically promising places (though I’m sure we haven’t seen the end of RayShanna just yet), and I’d say his coming-of-age story is among the more fully realized on the show.

Also, Ray got punched in the face and nobody cared. Hannah and Adam walked away from the bar laughing about it and then Adam gave her his gross tooth.

Browne: Caroline as “that cray lady” in “that not so cray bar” is probably the most realistic character Lena’s ever painted. Also, perhaps the hidden gem in this episode (and the polar opposite of Marnie and Hannah singing Rent) interrupts the nightmare duet, with the woman entering the room and announcing the fight.

I love the idea of Lena imagining what a fight must be like at a bar, and ending up with a slightly more angry version of the messy food fight scene in Fried Green Tomatoes.

I almost passed it back off to you without mentioning Caroline in the bathroom crushing the glass in her hand while naked from the belly button down. Hannah’s scream was great; it was almost as if they didn’t tell her that GABY HOFFMAN WAS GOING TO BE NAKED AND CRAZY IN HER BATHROOM.

Wrap this up. Hit me with some final thoughts and then five words to describe this episode.

Yoshida: I would like a bottle/flashback episode about the Sackler siblings. It seems like a worthy well to plumb. We spend so much time on the minutiae of Hannah’s diagnosed craziness that it seems fair to spend some time on other characters’. I also came away from this episode thinking that waist-down naked Gaby Hoffman should guest star on Game of Thrones just to make its depiction of medieval-ish grooming habits slightly more believable.

We didn’t talk about Hannah’s publisher in the Keith Haring shirt checking Grindr and dancing to LMFAO either. Which just read as the writing room suddenly going into a fugue state and grabbing every lazy gay stereotype they could while also furthering the show’s hazily forming sub-thesis that nobody ever grows up or becomes less of an asshole. Feel-good stuff.

Beyoncé and Jay Z Will Get the Grammys Drunk (In Love)