Girls: And It’s Chill to Hear Them Talk 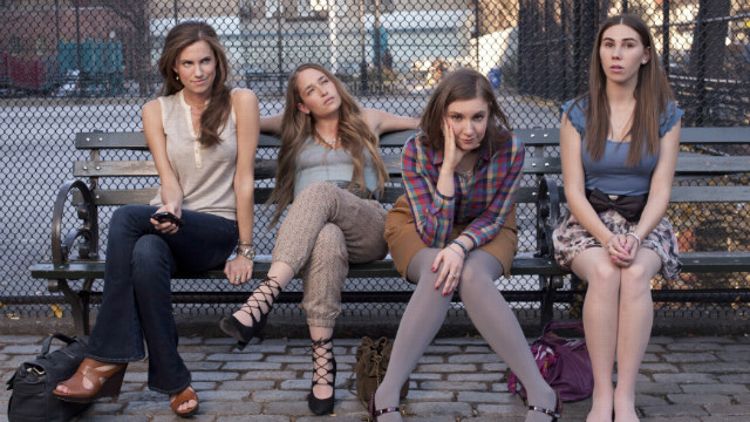 Nearly everything on television — at least everything not on CBS — is aimed at twentysomethings, but very little of it represents them the way they really are. Most people in that decade aren’t hyperactive post-teenage bone machines or pre-adult money-dropping slicksters; they’re an odd, often uncomfortable mash-up of the two. Rare is the program able to keep a foot in both worlds — one in stilettos, one in shower shoes — and depict life after college the way it really is: in flux.  Lena Dunham’s Girls, which premieres this Sunday night on HBO, might not be exactly that show for everyone, but it’s the closest we’ve come in quite some time. (In a typically self-aware move to blunt criticism and/or coronation, Dunham’s Hannah Horvath immodestly downgrades herself from the voice of her generation to the voice of “a” generation.) This is because unlike most entertainment about youngish people, Girls isn’t being focus-grouped by 30- and 40-year-olds in Burbank. (Ever notice how most televised twentysomethings have taste that’s 10 years behind? Surf’s up, Poochie!) Dunham, the writer, creator, director, and star, is only 25; she knows of what she tweets. And while the specific circumstances of her angsty slouching toward Bethlehem (or at least Boerum Hill) may be new, her messy attempts at selfhood are universal and cringingly enduring. Watching Girls is at once exhilarating and mortifying — I spent much of it alternating between holding my sides and covering my face — an instant Delorean back to a time in one’s life when everything is possible and nothing seems right.

We first meet Hannah at a restaurant seated across from her parents, played wonderfully by Becky Ann Baker and Tom Hanks’s former Bosom Buddy Peter Scolari. Over fancy pasta, Hannah delivers a manifesto that perfectly sets the tone: “I am busy trying to become who I am!” This Emersonian declaration of independence is quite grown-up, but her perpetual self-involved petulance is exactly the opposite. There might not be such a thing as a free lunch, but a free dinner? She’ll take it. And maybe another glass of wine, too? But perhaps she’s earned it, as her folks have just dropped the adulthood hammer: The post-B.A. bucks are cut off, beginning now. At 24, Hannah is now as adrift economically as she is personally.

One of the things that impresses about Dunham, both the actress and the writer, is how hard she is on herself: There are no forgiving winks or charming bouts of rom-com clumsiness. Hannah is a real person riding a rotten streak, spending her days toiling at a literary internship that might eventually turn into a job (in a clever nod to the show’s talky indie forebears, Hannah’s boss is played by the eternally smarmy Chris Eigeman) and her nights cuddling with her best friend, Marnie (a sensational Allison Williams), who is herself hiding out from her punishingly kind boyfriend, Charlie. (Poor retainer-holding, cutesy-talking Charlie. The curse of the Nice Guy has never been so brutally represented.) Hannah’s in-betweens are spent researching her memoirs, a.k.a. “living,” and seeking out intensely unrewarding hookups with Adam (Adam Driver), a terrifyingly recognizable outer-borough weasel who jokes about not wearing condoms and asks Hannah to play “the quiet game” in mid-pump. Adam may be slow to respond to texts (which are only above Facebook messages on the Girls “totem of communication”), but he’s quick to zero in on Hannah’s body issues, luring her in with his negs like a shirtless, artisanal-pickle-brining version of Mystery. Hannah’s busy trying to become something, all right, but just what that might be ain’t exactly clear.

The rest of this rough-sex-in-the-city crew is made up of Jessa (Jemima Kirke), Hannah’s magical English friend who downs White Russians to steel herself for an abortion (and, more shockingly, is able to pull off a hat), and Jessa’s NYU undergrad cousin Shoshanna (Zosia Mamet, best known as Peggy’s gay gal pal on Mad Men). Just as Marnie is the most grounded of the four — she’s the one who explains to Charlie that four people isn’t a “small party,” it’s something called “dinner” — the virginal Shoshanna is the broadest: She dresses in pink jumpsuits and characterizes herself as “a Carrie at heart — but, like, sometimes Samantha kind of comes out.” While some might find Mamet’s mannered performance jarring amid Girls’s mumblecore-ish, unactorly core (Kirke is Dunham’s real-life BFF from prep school, Driver ended up in the theater after a stint in the Marines), I found it hilarious. Perfectly unprecious, Shoshanna is an ideal counterpoint to Dunham’s self-described “fat baby angel.” She’s an East Coast Valley Girl, if the valley in question is West 80th Street, the barrier separating Zabar’s from H & H Bagels.

All four of the titular girls are united not by personality, or even by friendship — uptight Marnie is dubious of Jessa, the libertine; no one knows quite what to make of Shoshanna — but by an overwhelming desire to be something they’re not, or at least that they’re not yet. She’d hate the comparison, but Hannah’s unformed dreams of urbane grandeur aren’t really that different from those of the women who pack the Sex and the City tour buses every day in the West Village, hoping for a safe brush with danger and maybe a visit to Magnolia afterward. Hannah retreats from Adam’s mangy lair either to the bathtub (bringing a cupcake for strength) or to her parents’ hotel room for one last night in, or at least near, the womb. The untenable either/or-ness is endemic: Marnie slaves over a hot meal for Jessa (“it’s a very friend-ish thing of us to do”), who didn’t want it in the first place, and the whole thing just ends up devolving into a hash party anyway, while Jessa earns money babysitting but seems more comfortable playing with dolls. There’s something thrilling and familiar about watching people so trapped between ages — it’s called Girls and not Women for a reason — utterly absorbed in building themselves, scrap by scrap, from visions of adulthood pilfered from aspirational magazines, Elaine Dundy books, and other, glossier TV shows. “I am so close to the life that I want,” Hannah wails. But for now, at least, she has absolutely no idea how to attain it.

Many of these themes were present in Dunham’s breakout film, 2010’s Tiny Furniture, but, unlike everyone else with a New Yorker subscription, the movie left me cold. I found Dunham’s myopic fixation on the smallest details of her existence to be suffocating. With Dunham playing a version of herself, her real-life mother and sister cast as well, the entire thing felt intrusive and selfish, like being forced to cycle through someone’s Facebook photo galleries, A Clockwork Orange–style. Girls is likely to be dismissed by some on similar grounds: a self-absorbed generation making a show about its favorite subject. But the entire project is considerably more generous than that. With the focus spread around to other characters, the self-puncturing humor at the heart of Dunham’s vanity is more obvious, the deep affection she feels for those around her more palpable. Also, the jokes are better, from Eigeman’s curt dismissal of Hannah’s book (“We wouldn’t have you here to read it for us, would we?”) to guest star (and Furniture vet) Alex Karpovsky’s stoned paen to McDonald’s. The vibrant third episode, in which Hannah discovers her first love is not exactly who she thought he was, is particularly good, ending with one of the purest, happiest expressions of friendship I’ve ever seen. (Which, it should be noted, derives from a very zeitgeisty combination of Twitter and Robyn.)

It’d be easy, if reductive, to credit the other executive producers of Girls for this growth. Judd Apatow championed the show, and his stakes-setting touch is evident in the bluntness of the opening ultimatum (“No. More. Money!”), while Jenni Konner was on the staff of Apatow’s underrated Undeclared. But this is so much Dunham’s creation that the kudos belong with her. After all, who doesn’t grimace at the art they made in college? The broadening of her perspective, the deepening of the consequences suggest a writer and performer as serious about making something of herself as her alter-ego, only with much more successful and tangible results. Hannah’s ceiling, at least for now, is writing quippy status updates for free. Dunham’s is much, much higher.

Girls is best viewed outside of the maelstrom of pre-hype and backlash that’s consumed it, at least in the city in which it’s set. (It’s par for the course when you make a television show precisely about the sort of people who write about television for a living.) It’s not perfect — the bumpy second episode is proof enough of that — but neither are its heroines. (As for the criticism that the show only portrays the privileged — even without Daddy’s credit card, Hannah is hardly starving — that’s certainly the case, but no more so than literally every other show on television not made by David Simon. When’s the last time you saw anyone on a sitcom work? And that includes people in The Office. And to those decrying the cast’s lack of diversity, I’d humbly suggest that smart, complicated women are very much a minority on the small screen.) Beyond the dirty talk and the period blood, there is the kernel of a very special comedy here: stories and feelings we’ve seen before, only shot through a different lens, like a Hipstamatic version of the classic urban sitcom. But there’s more to it than that; by portraying the characters’ arrested childhoods — or is it stunted adulthoods? — so fearlessly, Dunham has given the show the same chaotic spark that defines one’s twenties. All that freedom — to get drunk in the afternoon and make out in a bathroom stall or to fall asleep watching reruns of The Mary Tyler Moore Show — and no idea what to do with it. Despite Shoshanna’s LiveJournal wishes, no one at that age is really a Carrie or a Samantha. They’re barely a Hannah or a Marnie. Everything is possible for these Girls, and anything can happen. It’s terrifying, it’s great. We can’t look away.

A Debate About Storage Wars: Does Rooting for Dave Hester Make You a Bad Person?