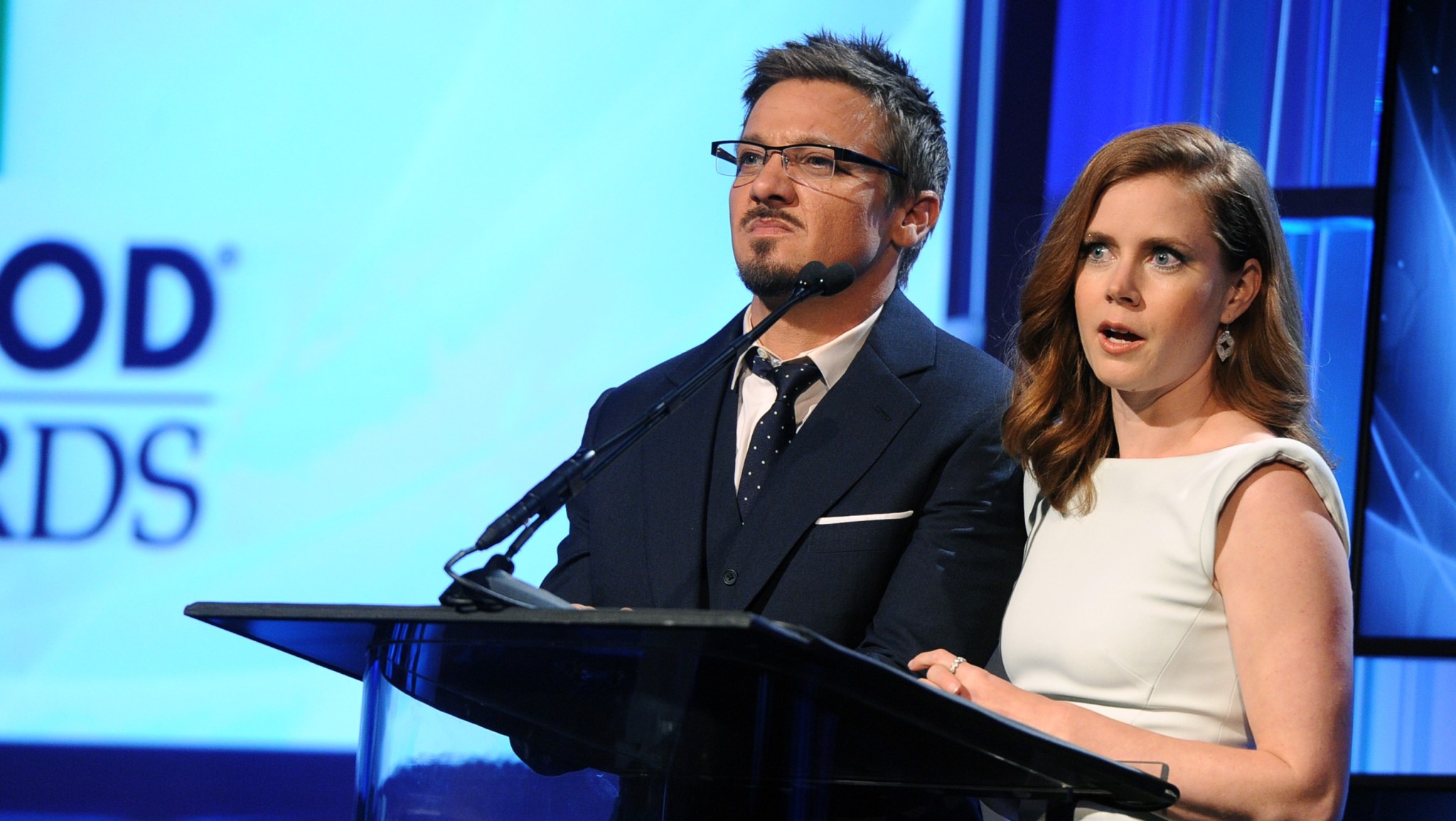 There’s a pretty good chance that if you’ve tuned in to CBS over the past month or so — you have your reasons, no judgments: football, lovable nerds in bad clothes making theoretical physics jokes, franchised crime procedurals with initials in the title — you may have been exposed to the promotional onslaught for something called the Hollywood Film Awards. Sounds important, right? All the keywords are there to stimulate the reptilian parts of your brain excited by any chance to see famous people being handed shiny trinkets by other famous people barely restraining their jealousy. And the ceremony is being televised for the First! Time! Ever! That sounds momentous! How could you possibly pass up the chance to witness television history of some kind? You’re already probably clearing your schedule — sorry, Netflix queue! You’ll finally get around to Jiro Dreams of Sushi next time — so you don’t miss out on one of the all-too-rare chances modern society offers to share a meaningful communal experience with your fellow human beings.

But then you realize one tiny, nagging thing: You have no idea what the Hollywood Film Awards are. No one does, outside of the people who have received one. This could present a small obstacle to your viewing plans. You don’t have unlimited time. No one does, except astronauts gently floating inside fifth-dimensional tesseracts, contemplating the space/time-spanning power of love. You probably require some information before committing to this (admittedly amazing-sounding: First Time Ever!) programming block.

In the interest of supporting this underheralded Tinseltown institution and cementing its rightful place in the awards-firmament, we’ll do our best to answer any questions you might have. You can thank us later. Or pause for a moment and thank us now. We’re flexible about when we graciously accept your appreciation for helping to improve your lives.

Is this a brand-new awards show?

We won’t go all the way back to 1997,1 because your time is valuable, but we will note that in just the last three years, people you have heard of, from Matthew McConaughey to George Clooney to Joseph Gordon-Levitt to Sandra Bullock to Harrison Ford to Quentin Tarantino to Bradley Cooper to Richard Gere to Quvenzhané Wallis to Julia Roberts, have received various Hollywood Film Awards, many of whom have showed up to the Hollywood Film Awards’ star-studded dinner in person to accept the honor. This will merely be the first year that we, members of the general public, will be invited inside (not literally — please don’t show up without a ticket! Security is tight in the age of Ebola and ISIS!) to share in their glory through the community-building magic of television.

When will the Hollywood Film Awards be broadcast?

Oh, dear, maybe we should have started with this one! They’re on tonight! Friday night! On CBS, at 8 p.m. ET. But we recommend that you tune in at 7:30 p.m. for the Countdown to the Hollywood Film Awards Red Carpet Special, because everyone attending works very hard to look their best for you. You wouldn’t want to disrespect that effort by skipping straight to the ceremony itself. You’ve watched awards shows before, you know how this needs to work so the whole system doesn’t come crashing down around us in an unthinkable cataclysm of violently reversed updos, broken-heeled Louboutins, and shredded Versaces. “Who are you wearing?” is just as important a question as “Who is going to win the Hollywood Film Award, the Hollywood Blockbuster Award, the Hollywood Supporting Actress Award, the Hollywood Song Award, and the Hollywood Breakthough Director Award?”

There is also a one-hour aftershow, but viewers should consider that optional; the heated debates and euphoric insta-remembrances taking place at your own Hollywood Film Awards viewing party are a fine substitute for CBS’s official offering.

Sadly, Neil Patrick Harris recently2 accepted an invitation to host the Oscars. There was a time when Neil Patrick Harris would have supported an underdog like the Hollywood Film Awards by lending his universally lauded variety-show skills to them, but he’s now obviously more concerned with padding his hosting résumé than doing great work.

That’s sad news and a depressing commentary on one man’s ruthless ambition, but behind every cloud, a silver lining: Your master of Hollywood Film Awards ceremonies will be none other than Queen Latifah. And she’s (correctly) excited about it:

You heard her: “This is the one you want to watch. This is going to set off the season.”

Who gives out the Hollywood Film Awards?

Great question! Nobody knows. The identity of the Hollywood Film Awards Advisory Selection Team is known only to Hollywood Film Awards Founder and Selection Team Chair Carlos de Abreu, to protect their privacy. Awards season is an often dangerous one, with statue-thirsty throat-stompers like notorious kudo-warlord Harvey Weinstein willing to stop at nothing to secure laurels for his greedy empire. By keeping the names of his selection committee private, he’s not only maintaining the unparalleled integrity of the Hollywood Film Awards, he’s ensuring his charges stay safe. Carlos de Abreu may be the last honest man in the game. 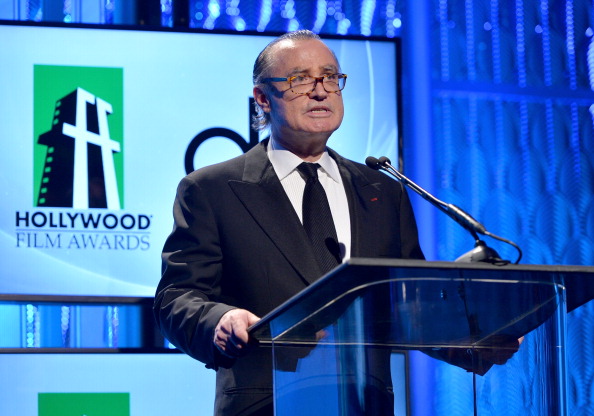 Ssssshhh. We’ve already said too much. But we will note this: Janice Pennington wouldn’t have married him if he were not a worthy steward of the Hollywood Film Awards. Nor would she have coauthored a book with him about the disappearance of her second husband, a German mountain climber who mysteriously disappeared in Afghanistan in 1975. Per Publishers Weekly:

Pennington, a hostess on the TV game show The Price Is Right, married German mountain-climber Friedrich (“Fritz”) Stammberger in 1974. The following year, while on an alleged climbing expedition where the borders of Russia, Afghanistan and Pakistan converge, he disappeared and was never heard from again. Pennington made inquiries, but, she claims, the CIA informed her that her search compromised national security. In 1980 she met Carlos de Abreu, a native of Mozambique, and four years later, when Fritz was legally declared dead, they married. To exorcise her first husband’s ghost, Pennington and de Abreu continued to investigate his fate. Their quest ended in Moscow, where they found hazy information suggesting that Fritz had been a CIA spy, was dead and buried in Afghanistan. The book is overlong, much of the suspense is artificially generated and the writing is compromised by sophomoric gush.

Now you see why it’s so important that the Hollywood Film Awards Selection Team stay secret. Trust Carlos de Abreu implicitly, as a first-ballot Barker’s Beauties Hall of Famer does.

Who is nominated for this year’s Hollywood Film Awards?

Are you ready? Because this is perhaps the most incredible thing about the Hollywood Film Awards:

There are no nominees.

They cut straight to the winners.

The Hollywood Film Awards are not interested in filling four tiny onscreen boxes with the faces of disappointed losers mustering their acting skills to barely conceal their soul-crushing disappointment. The Hollywood Film Awards choose to go full-screen on that all-important fifth box, the one with the beaming winner in it, the one whose life has just been changed forever. Why trifle with a pointless list of also-rans when you can reallocate that precious time to celebrating the victorious? Nothing is more powerful than an idea, and the idea here is this:

It’s nothing short of an awards revolution.

Who has already won Hollywood Film Awards this year?

The Hollywood Film Awards have even already announced a handful of winners. Congratulations to Birdman cinematographer Emmanuel Lubezki, The Imitation Game composer Alexandre Desplat, the costumer from The Grand Budapest Hotel, the editors of Fury, the visual-effects artists who brought the gleaming Rock ’Em Sock ’Em garbage piles of Transformers: Age of Extinction to metal-mashing life, and all the other technical category standouts listed here. Soon your names will be joined by those of Hollywood’s biggest stars. The Hollywood Film Awards regret that they could not include you individually in Friday night’s televised ceremony, but they know you realize you have to break some below-the-line eggs to make a beautiful awards-omelet. You’re pros, every last one of you. 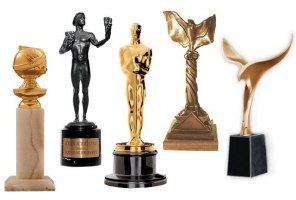 None of these is the Hollywood Film Award. But imagine all of these statuettes melted down and then spiritually reconstituted into something far more breathtaking: 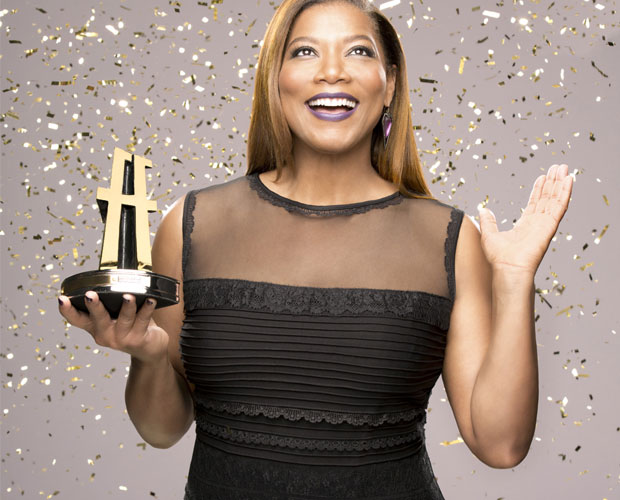 Do we even really need an awards show in mid-November?

Of course we do. Don’t be stupid. What are we supposed to do, sit on our hands until the corrupt monsters at the Hollywood Foreign Press Association deign to crack open the bottomless champagne at the Golden Globes?

Do the Hollywood Film Awards have any impact on the Oscar race?

This prompts our own question:

Who cares? We’re a little offended you’d even ask that after we’ve spent all of this time explaining why the Hollywood Film Awards are special in their own right.

The Hollywood Film Awards are not only kicking off awards season, they are redefining it.

The Hollywood Film Awards are an end unto themselves.

The Hollywood Film Awards are not a gilded canary sent to die in the suffocating mine shaft of your Oscar-prognosticating agenda.

The Hollywood Film Awards are a singular awards experience.

The Hollywood Film Awards are on CBS tonight, at 8 p.m.

The Hollywood Film Awards wouldn’t have Neil Patrick Harris now even if he begged. He’ll be too busy working his way through that hot bag of rusty Oscars until late February, thinking about what a huge mistake he’s made.