Game of Thrones Season 3, Episode 7: Mothers, Don’t Let Your Babies Grow Up to Be Wildlings 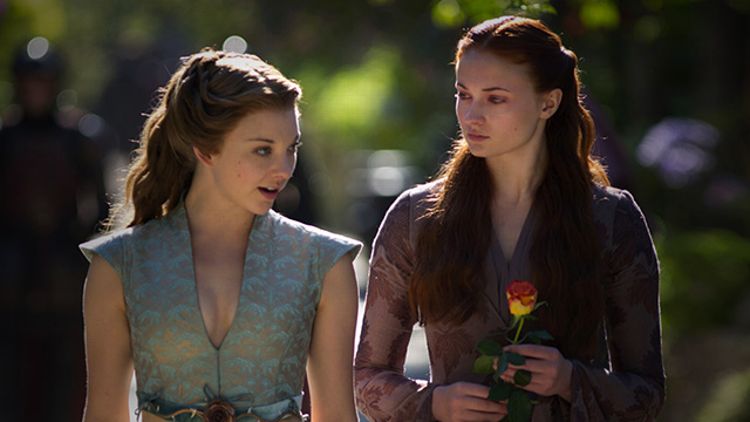 “The Bear and the Maiden Fair” wasn’t a particularly good episode of Game of Thrones. I found it draggy and digressive, which was a surprise considering it was written by author George R.R. Martin, whose past contributions have been among the series’ best, and directed by the truly gifted Michelle MacLaren, the visual genius behind Breaking Bad’s “Madrigal,” who, for some reason, was handed an hour that was all tell and very little show. But it was an ideal episode for Mother’s Day. Not because it featured marked-up brunches and a flurry of last-minute flowers — though I’m sure there’s a Sansa Stark joke in there somewhere — but because of the way it demonstrated that there’s no love more lasting or abiding than that which exists between a mother and her child.

Westeros is a harsh, decidedly macho realm. Its females, in Bronn’s words, are generally afforded only two options in life, to be wedded or bedded — though I’d add a third in memory of Ros: to be deaded. Yet it appears that maternity grants Westerosi women something nearly as valuable as Yunkish gold: perspective. Turns out, Margaery’s preternatural calm isn’t due to the tightness of her corsets cutting off her circulation, it’s because the version of Game of Thrones she’s playing is a very long game indeed. Though she’s marrying a preening, bloodthirsty sadist with an itchy trigger finger where his heart should be, Margaery seems sanguine about her chances. “My son will be King,” she shrugs to Sansa. “Sons learn from their mothers. I plan to teach mine a great deal.”

Apologies to Whitney Houston, but children, in Game of Thrones, aren’t merely the future, they’re savvy investments in it as well. Whether you’re born in Highgarden or Flea Bottom, becoming a mother is a way to stabilize your standing in the present and, ideally, exert some sort of control over the unknowable events to come. Seen through this long-range telescope, the men of the Seven Kingdoms aren’t conquering heroes, they’re glory-chasing headhunters, akin to tabloid fixture soccer stars who camp out in front of the goal, blissfully ignoring of all the hard work and drama occuring behind them in service of their golden moment. In this metaphor the women are like Xavi — hey, it’s Grantland; I’m allowed — the low-key Spanish genius able to visualize five passes into the future. Sons fight and die for the things they can see: power, gold, and spoils. But mothers plot and hope for the things they can only imagine.

(In the context of Game of Thrones Season 3, you should consider me a mother. I believe something worthwhile is coming around the bend — perhaps it’s lurking in Castle Black or flowing in Gendry’s bastard veins. But this is two weeks in a row that have felt flabby and unformed when considered as individual episodes. I don’t want to pick on Theon unfairly — his exhausting, perennially unnamed captor is doing quite enough of that — but his story line of increasingly stupid cruelty only highlights the inherent dangers of adapting such a sprawling, uncentered story. TV can go wide and TV can go deep, but unlike a book it can rarely do both at the same time.)

Cat Stark is no one’s idea of a successful parent; she’s spent a season and a half in custody instead of her son’s good graces. But when she shot her trademark disappointed glare at Robb last night it was possible to appreciate the impossibility of her predicament and how similar it is to the one faced by Cersei, Cat’s enemy in life but sister in filial frustration. Free from spousal distractions, Lady Stark can see the game board much more clearly than her smitten firstborn: how promises made in wartime are more important than puppy love, how doing what’s right is sometimes at odds with doing what’s best. (The fate of Lord Karstark a few weeks back gave her the heads up on that.) But her gender is proving to be binding — Cat wants to counsel Robb, or at least send him to his room, but she can’t; instead she made her own series of disastrous moves behind the scenes, like freeing the Kingslayer. Besides, Robb won’t listen to her because (a) she’s his mom and he’s trying to swim in the big-boy pool, and (b) there’s a full moon in the North!

Was it just me or did the slow, creepy lovers vibe in Robb’s sex tent seem off to everyone? I couldn’t tell if it was meant to be rich with foreboding or swollen with stalling. “How am I supposed to sit here planning a war when you’re sitting over there looking like that?” demanded the would-be King, though it’s telling that the only attacking we’ve seen him do this year is between the sheets. Talisa, for her part, seems wildly disconnected from just what it is she’s married into; as she scribbled romance fantasies in High Valyrian she reminded me of Megan Draper in Season 5 of Mad Men, explaining to her French-speaking mother what a prince the guy she married is, even though we have every reason to know he’s a cad. Robb’s not a bad fellow — look how he lit up at the thought of the next generation of Starks already shimmying up on their high horses inside of Talisa’s womb — but I’m pretty sure that’s sort of the problem. Like Don Draper last year, Robb’s gone on love leave when he can least afford it. The would-be King and Queen in the North delivered the sort of blinkered, foreshadowing couple talk you usually only hear in horror movies. “Can you leave the war for one night?” she asked, as if he hadn’t been gone for months.

Self-righteousness is sort of a Stark family trait, isn’t it? It’s a neat trick of the series that two years after old Ned was revealed to be Not The Hero his surviving family is proving to be Not That Heroic. Arya’s situation with the Brotherhood is less than ideal — she’s no closer to being reunited with her brother, and her BFF is now sailing away from her as well — but at least she’s warm and safe. Yet the little lady cares nothing about reality, just revenge: she harangues Beric and Thoros and, in a classic teen girl move, announces she’s a goth. (“Death Is My One True God” is, I believe, a seminal B side by Fields of the Nephilim.) Mistaking the Brotherhood’s lion hunt for a wild goose chase, she runs straight from their comforting fire into the frying-pan face of Sandor Clegane. She, like her brother, insists on fighting idealized battles in her head while ignoring the facts on the ground.

Even Bran revealed himself last night to be kind of a dick. The way he’s fallen under Jojen’s spell, the way he spouts dogma about ravens, revelations, and fate — his self-satisfied fanatacism reminds me of a college freshman after being dragged to his first meeting of the campus socialists. If you ask me, Osha’s right to freak out about what’s on the other side of the wall. What Bran calls “truth” Osha calls by another name: terrifying ice zombies! Since Game of Thrones derives from a fantasy novel, there probably is a mystical “reason” why Bran was tossed out of a tower window; because it derives from what I am assured is a good fantasy novel, it’s worth remembering why Bran was actually tossed out of a tower window: because he saw the Queen getting lanced by her brother, the knight. You’d think the velocity with which Bran hit the dirt would help him remember to keep his thoughts there, instead of indulging so many flights of fancy. At least Sansa finally had her wake-up call. No longer is she the “stupid little girl with stupid dreams who never learned.” Now she’s just miserable like a true Westerosi!

The more I think about it, these all seem like behaviors inherited from Ned, not Cat. Which means that Margaery might not be as clever as she thinks she is and her opinion of the influence of motherhood not nearly as accurate as she hopes. Even her grandmother, the formidable Olenna, was bested last week by Tywin Lannister, the World’s Worst Father. (And the World’s Most Underminey Grandfather. Charles Dance’s delicious, dragon-ignoring scene with Joffrey was one long, uninterrupted subtweet. And Tywin didn’t even need his desk or his quill to accomplish it!) We don’t know anything about Tywin’s late, lamented wife, so it’s hard to know just where Jaime’s latent heroism is coming from — though my guess is it’s no coincidence that the Kingslayer lost his hand, and his permanent sneer, right around the time his father reacquired the title of Hand of the King. And anything that keeps Brienne and her former prisoner bound together is worthwhile in my book — theirs is a digression worthy of a novel unto itself — but I have to admit, of all the story lines from Anchorman I expected to see ripped off by Game of Thrones, the Bear Fight wasn’t chief among them. (I figured one of Joffrey’s jesters would pick the wrong day to pick up the jazz flute or Grand Maester Pycelle would be replaced with Dr. Chim Richalds.) People who freelance for friendship don’t necessarily last the longest in the Game of Thrones, but these smaller battles — Jaime vs. his reputation, Jaime vs. his family’s legacy, Jaime vs. a bear — tend to interest me more than the larger war.

Still, all told, it’s probably telling that the best parenting on display isn’t even human. Daenerys’s relationship with her scaly sons is easily the healthiest example of human/lizard parentage since the original V back in 1984. She went through hell for them and now they’ll do the same for her — at least until someone else starts tossing them free meat. More than anything, I liked how the Mother of Dragons has now become the Breaker of Chains. Before sending off her loyal army to “blood” themselves in the slave-filled streets of Yunkai, she indulges a little verbal jousting with Jorah, asking rhetorically about “what happens to things that don’t bend.” But Daenerys, more than anyone, should know the answer. She herself was forced to bend multiple times (and, thanks to the vigorous Dothraki libido, in all sorts of ways) before emerging from the fire hardened like Valyrian steel. Now she’s using her newfound mettle to free an entire continent before asserting her claim to another. If Ygritte offers a more grounded alternative to the maternal Hunger Games of King’s Landing — she’s not planning for a future, she’s happy to live or die in the present and she knows it’ll probably be the latter — Daenerys is swaggering proof of the power of women’s lib. She’s not content sitting back and hoping her children change the world. She’s going to be the one who shows them how to do it.