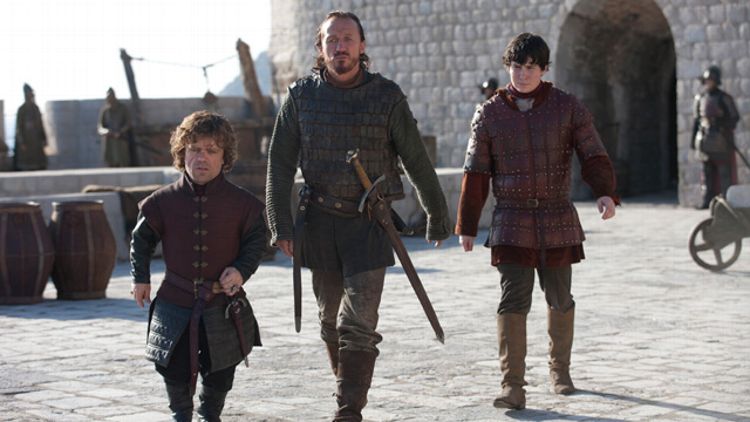 There are no straight lines in Westeros. Everything twists and turns at its own deliberative speed. And woe to those unable to adjust accordingly! The titular Game of Thrones tends to devour players who lack the requisite patience to participate far before those who merely lack skill: Noble Ned rushed to speak the truth and quickly lost his head; randy Theon tried to impress his father by conquering first his sister’s breastplate then his brother’s castle, and in his haste he failed at all three. The most successful characters tend to be those willing to roll with whatever the gods throw at them, like Robb Stark wandering in the woods, missing the Lannisters but finding a wife; or Tyrion, using his minimal brawn, not his outsize brains, to defend the city that somehow wound up in his care.

The same is also true for those of us watching Game of Thrones at home. Twenty hours into this epic, unprecedented endeavor of adaptation and sexposition and we’re still closer to the beginning than the end. Characters remain frustratingly separated by oceans, and plot advancement, when it does arrive, tends to do so gradually, like a rash caught at Chez Littlefinger. Seasons progress, unhurriedly, along a complicated track, one originally designed for the expansiveness of print by George R. R. Martin and now cleverly reconstructed for the forgiving budgets of HBO by David Benioff and D.B. Weiss. Because their priority is servicing the books, not the casual television fan, watching Game of Thrones can occasionally feel like attempting to piece together a jigsaw puzzle from all four corners simultaneously — and without any idea of what the final image is meant to be.

Case in point: We’ve seen Daenerys evolve from a pampered princess in exile to a desert-wandering, dragon-commanding warrior queen, capable of incinerating at least one witch per season. And yet, in last night’s premiere, Ser Jorah once again moves the goalposts for her development. As the Dothraki dry-heave all around him, he pooh-poohs her potential power-grab: No, he says, she won’t have a “true khalasar” until she’s able to “prove [her]self strong. And not before.” How many still-beating horse hearts does a girl have to devour to be tough, Jorah? The pace of Game of Thrones, like the terrain beyond the wall, can be glacial.

But, like I said at the top, the Game favors those able to adapt and appreciate the journey, not those who pine solely for the destination. As I noted in my season preview, the most thrilling part of “Blackwater,” last season’s dramatic high point, wasn’t the way the sky brightly exploded with green fire. It was the way that fatal conflagration lit the path ahead. “Valar Dohaeris,” the third-season premiere, was an exuberant continuation of that spark. The characters are still sprinkled carelessly across the map like the crumbs from a rest-stop Cinnabon, but Benioff and Weiss used crackling dialogue and the sharpest weapon in their care — the familiarity forged over the course of these past two years — to make even a wildling feel right at home. As we rushed from the freezing North to the solemn South, the episode, nimbly directed by Daniel Minahan, took on the air of the very best caper flicks: the clearing of throats, the setting of stages, and, most important, the reintroducing of the gang. Though I’ve no idea when the band will truly get back together, seeing them all again felt exhilarating just the same.

Two years ago, the series began with a glimpse of a White Walker — the fearsome ice zombies beyond the wall who pose much more of a threat to the stability of Westeros than Joffrey’s temper or Melisandre’s secondhand smoke — and the sophomore season ended the same way. And so it was nice of Benioff and Weiss to reintroduce us to the Seven Kingdoms right where we had left it: freezing and terrified and on the run. But while Sam and the rest of the windburned Rangers are headed back to warn the skeptical normals about the dangers coming even faster than winter, Jon Snow is venturing farther out into the ice. His stated reason for enduring the stones and sneers of Mance Rayder’s encampment is that he’s going undercover to discover the ways and means of yet another enemy. But I can’t help but think he’s following Ygritte into the blizzard because it’s the closest thing to a cold shower he’s likely to find that far from civilization. Oh, how I missed Kit Harington’s epic emo face! Jon’s gone from Half-Hand to double entendre city with his flame-haired foil who licks her lips while speaking of giants who can “pound a man straight into the ground like a hammer on a nail.” If Mance doesn’t like Jon, she leers, “I’ll be free to kill you.” Ah, oui! La petite mort!

One of the benefits of the shifting perspectives in Game of Thrones is the way it takes its time acclimating us to one point of view before suddenly flipping the script. The introduction of the unpretentious, appealing Mance — played by the wonderful Ciaran Hinds, just one of the many veteran actors the producers have acquired by trolling the stages and deli cases of Europe — is another indication that the Houses we’ve been aligned with thus far might not be worth the effort. Under Mance’s munificent, if chilly, command, men are free to address each other directly, to eat whole roasted rat without standing on ceremony, and to dress in a suit made of bones without looking like a screamo front man circa 2005. Most crucially, men are also allowed to serve with and/or sleep with women, something forbidden in the roving sausage party known as the Night’s Watch. I was drawn to the King Beyond the Wall for the same reasons I’ve always been fond of Salladhor Saan, the merry sex pirate of Lys who made his welcome return last night: They are far enough removed from the game board to see that winning outright is impossible. Let the silly Westerosi play musical chairs with the Iron Throne: Let’s set sail with these two and see what kind of trouble we can get into!

A lifetime ago, I would’ve placed Tyrion in that category, too. With a goblet in his hand and a whore in his bed, the little man trod lightly through the halls of power but carried the biggest shtick: more funny than fearsome, he was written off by his incestuous, warmongering family but remained too clever to care much either way. But “Blackwater” changed everything for Tyrion; there’s a vicious scar where his smirk used to be. Now he’s brooding about in reduced circumstances — small even for a man of his stature — and with only the delightful Bronn, the best friend money can buy, at his side. As good as Peter Dinklage is at playing offense — watching him banter with the equally excellent Lena Headey as the surprisingly sympathetic Cersei was like watching Olympic-caliber racquetball at a Ren Faire — it turns out he’s even better when hunkered down.

For those keeping score at home, the worst slaughters depicted on Game of Thrones, in order, are now: (1) The City Watch vs. Baby Baratheon Bastards (Episode 201), (2) Tywin Lannister vs. his son’s pride (Episode 301), (3) Tyrion’s accent vs. the words “baby boy” (Episode 301). Charles Dance is so magnificently malevolent. Couldn’t you just hear the writers feeding him more insults from off-camera like improv dick jokes on the set of a Judd Apatow movie? “Jugglers and singers require applause,” he sneered. “You are an ill-made, spiteful little creature full of envy, lust, and low cunning.” And through it all Dinklage manages to say everything by keeping completely silent, roiling with rage not at his father, exactly, but at himself for ever expecting to be treated otherwise. Poor Tyrion. Let’s hope this was the wake-up call the hero of Blackwater Bay so desperately needs to get himself together and get the hell out of Dodge. As Rasheed Wallace’s accountant could’ve told him, when you start complaining about fairness, you’ve already lost.

What else? Margaery Tyrell, no longer the second beard of the dear, departed Renly, has remade herself as cunning humanitarian. Her detour into the King’s Landing Home for Adorable Orphans and Wide-Eyed Moppets was one part Princess Diana, two parts Avon Barksdale, keeping the streets sweet by pressing flesh and handing out gifts. Across the water at Dragonstone, Stannis has the vacant, thousand-yard stare of someone who’s seen too much killing — or both seasons of The Killing. As frustrating as many of the ill-advised alliances of Game of Thrones can be — Robb and his mother, Littlefinger and that goatee — none are as crazy-making as Ser Davos’s blind loyalty to his blinkered liege. Stannis is knee-deep in his Plastic Ono Band phase with Melisandre, and Davos — who, in Liam Cunningham’s mangled hands, is quickly becoming one of my favorite characters — still comes crawling back. (How long was he stranded on that rock? And without even Wilson for company!) I suppose it’s part of GOT’s long con, that it presents this sort of knightly devotion first as noble, then as tragedy, and eventually, I fear, as farce.

The most promising developments were saved for last season’s most frustrating strand. Daenerys has finally left the empty magic trick of Qarth in her rearview mirror and set sail in search of an army. (Her fish-flinging dragons are not yet big enough to melt castles, but they’d make a killing at Sea World.) And so she and Jorah are treated to one of the more monstrously impressive displays in a show full of them: the Unsullied, a battalion of castrated soldiers willing to stand still for days and skewer babies just to make a point. As for Dany, she’s stuck in the way she often is: Is she a proud, vengeful lioness or, as the slaver dismisses her, “a soft, mewling fool”? I’m no expert, but it seems to me that one doesn’t contradict the other. The more passionately Daenerys pursues the throne, the more hopeless and ridiculous she seems. No wonder Jorah — as sensitive toward his beloved Khaleesi as he is toward the exposed, useless nipples of his fellow man — seems to be slow-rolling her. He’s in no particular hurry to get back to the chilly death fields of the West.

Perhaps that’s why Jorah seems so unhappy at the timely return of Ser Barristan Selmy of House Early Bird, a graying knight last seen throwing his sword at Joffrey in disgust back in Season 1. With the devout Barristan around — it was he whom Jaime Lannister referred to last season as a “painter who uses only red” — it’s unlikely that Jorah’s plodding pleasure cruise for two will continue. But while that may be bad for his long-term prospects — romantic and survival — it’s good for a show that only gets into trouble when it drops anchor. The allure of Game of Thrones is a poison bug, hiding in a wooden ball, held by a homeless girl inhabited by the spirit of a black-toothed warlock. It’s knotty, cool, and complicated, and it’s sometimes awfully hard to follow. Like a Sunday stroll in Flea Bottom, the shit can come flying at you from all directions. But I’ve surprised even myself with how happy I am to be back in the muck.

G.I. Joe Retaliates All Over the Weekend Box Office