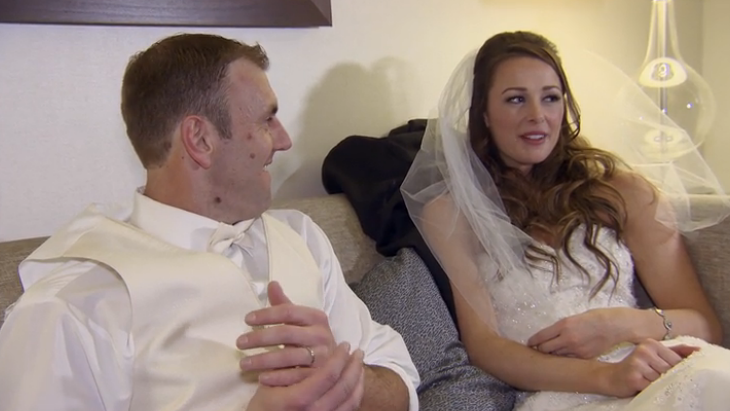 Why Are We Watching Her? She’s on her honeymoon with her husband, Doug, and it’s not going so hot.

How Did She Get Here? She agreed to let a panel of experts pick her perfect match, and then to marry him without knowing anything about him, after meeting him for the first time at the altar.

What’s the Grossest Thing We See? Though Jamie certainly could have stopped the wedding as soon as she got a look at Doug and decided he was not for her, she didn’t. But now that they are married, she’s still treating him like a leper. On their wedding night, she tries to make him sleep on the couch in their hotel suite, and repeatedly orders him not to touch her and not even to refer to her as his wife. She even objects to his having put a pair of his shorts in her suitcase, warning him that they’re not on that “level” yet. Letting someone’s laundered clothing touch yours is a level?

What Have We Learned? After spending several days with Doug, Jamie finally lets him kiss her at dinner on the last night of their honeymoon (no tongue), so we’ve learned that Doug is good at wearing down even the strongest resistance and may have a future as a hostage negotiator.

Who Is This Now? Ronn.

Why Are We Watching Him? He’s trying to make a good impression on Brie, who’s sharing his household for a while.

How Did He Get Here? He’s temporarily traded wives with Tyler Christopher, a fellow soap opera star.

What’s the Grossest Thing We See? Ronn surprises Brie by greeting her in the morning with a cappuccino and some fresh-cut flowers. Nice gesture, but it’s not really necessary for him to do so while shirtless? Later (shirtless again), he asks Brie how affectionate she is with her husband, hintingly revealing that he and his wife, Devin, are very demonstrative with one another and that he’s reaaaaaaaally missing that this week.

What Have We Learned? Ronn may have agreed to do Celebrity Wife Swap because he took its title literally.

Who Is This Now? Clive.

Why Are We Watching Him? He’s embarrassing himself on a night out with the bros.

How Did He Get Here? Clive and his wife, Tanisha, are at an inpatient couples’ therapy boot camp, but on their penultimate night in treatment, the boot camp’s codirectors have separated the men and women and sent them to different clubs on a “hall pass” from their spouses.

What’s the Grossest Thing We See? Clive gets so drunk, so fast, that he and his fellow male boot campers are kicked out of the club over his unruly behavior. On the ride home, Clive has the driver pull over so he can vomit out the door; later, at the house, we see him stick his finger down his throat to make himself throw up more.

What Have We Learned? Evidently the producers of Marriage Boot Camp think we might not be sure what was going on if we only HEARD Clive puking.

Why Are We Watching Him? He’s seeking the aid of Drs. Dubrow and Nassif in remediating an unsightly scar.

How Did He Get Here? Awhile back, Mike decided to address his high hairline with hair restoration surgery. Unfortunately, the surgeon he found was not so reputable, and took a wide graft from the back of Mike’s head that left a huge scar there.

What’s the Grossest Thing We See? The doctors’ solution to fixing the scar is to cut the scarred skin off the back of Mike’s head, and then sew his scalp back together in a less visible way. However, to do that in a way that won’t cause more tension in Mike’s skin and lead to another scar, they will need to insert a stretcher around the back of his head. In this case, that means Mike’s getting an oblong bladder — not unlike a breast implant, apart from its shape — sewn under his skin; he will then have to return several times so the doctors can fill it with more and more saline for it to achieve the desired effect. Basically, Mike’s going to have to walk around with a spare tire of saline on the back of his head. Also: It hurts.

What Have We Learned? When the doctors warn you that a slightly unusual procedure might not help and might, in fact, make things worse: Listen. Because that’s exactly what happens to Mike, who will now have to go through the rest of his life telling nosy strangers the mark on his head is from a shark attack.

Get to Know Your Drake Crony: An OVO Sound Primer