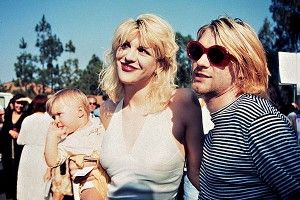 The video below comes from Hit So Hard, a documentary about the troubled life of Hole drummer Patty Schemel. As AntiQuiet explains, while it’s not about Kurt and Courtney directly, “the scene [from the movie] that most viewers kept bringing up was the one where Cobain and Love duet on a never-released song, called ‘Stinking of You.’ It’s taken quite a while, but footage of the couple singing has hit YouTube.” It’s unfortunate that it’s only over a minute long, because it’s plenty fascinating seeing Cobain and the increasingly crazier Courtney Love — her latest bit of Lovian publicity came when she accused Dave Grohl of trying to sleep with her daughter — as a normal, affectionate, doting couple. And then there’s Cobain, out of character, in the crib with the infant Frances Bean and in front of the mirror, holding her up and making goofy voices: “Look at the funny little froggy baby! Aw-aw-aw!” (Also, while it’s quite possible that Cobain and Love were just completely fucking around on this track, “Stinking of You,” it is now completely lodged in my head). It’s at least a possibility that Courtney Love will, at some point soon, say something in public in relation to the release of the video that will bum you out about watching it. For now, then, enjoy.