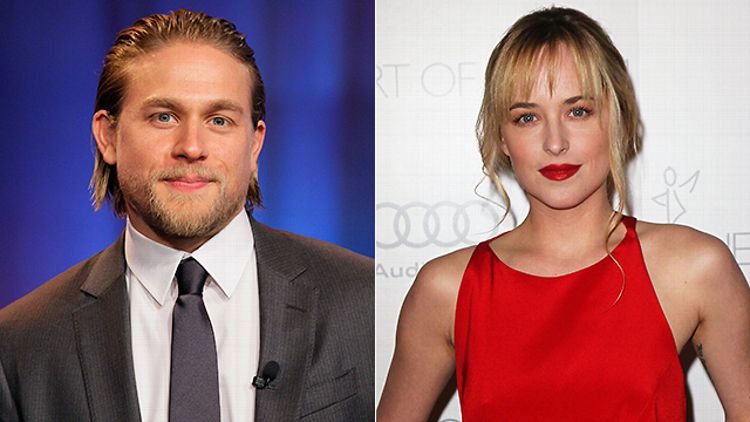 Everyone’s sure kept a keen eye on the Fifty Shades of Grey casting, especially considering a lot of people claim to have no intention of seeing the movie. Of course, that fits with the larger Fifty Shades pattern: A friend’s mom described author E.L. James’s writing style as “like Danielle Steel with a bad flu,” but confessed to buying the second and third installments in the trilogy nonetheless. It’s a perfect sadomasochistic relationship.

Neither Johnson nor Hunnam were among the names floated in the early rounds of the fantasy casting game. In late June, rumors began circulating that Robert Pattinson, Jake Gyllenhaal, and Ryan Gosling were under consideration, and Bret Easton Ellis tweeted Monday that Pattinson was James’s first choice.

It seemed a safe bet the film would settle on a pair of unknowns, actors who wouldn’t be risking established reputations by accepting the roles and who would stand to gain from such a high-profile project, even if they had to endure spankings and whippings for Hammer’s imagined audience of moms. Director Sam Taylor-Johnson has a knack for capturing emotions (see: her photography and video projects, including the “Crying Men” series, which depicts famous male actors weeping), so a portion of Fifty Shades fans nurtured a justifiable hope that the casting process would make room for real chemistry between the two leads.

So, are fans happy? Monday’s casting announcement was intended to be a shocking reveal, following “studio insiders'” denials of Hunnam’s casting as recently as two weeks ago, and releasing Hunnam’s and Johnson’s names on the same day was a great way to maximize publicity. Many commenters reacted by criticizing Hunnam and Johnson for lacking sex appeal, and it seems some fans were still clinging to hopes that Pattinson and Kristen Stewart would star together in a meta-sexual fan-fiction bondage jubilee.

While Johnson is a relative rookie (perhaps you remember her as one of Justin Timberlake’s young playthings in The Social Network, a single mom in the one-and-done season of Ben and Kate, or an undercover cop in 21 Jump Street), she’s currently filming the modern adaptation of Cymbeline alongside Ethan Hawke and Milla Jovovich. Hunnam, meanwhile, recently gained crush points with Pacific Rim — crush points that are being critically threatened by his decision to take on Pattinson’s raunchy leftovers.

Hunnam is arguably taking a bigger risk than Johnson by agreeing to the film, especially because Pacific Rim didn’t lock him in as a guaranteed franchise leading man: As Forbes points out, Fifty Shades is a niche movie, and that niche is probably more likely to discreetly read porn on a Kindle than to stand in the public bondage film line. Perhaps most embarrassing for an audience is Fifty Shades of Grey’s fan-fiction origins, and the fact that the fan-fic is Twilight fan-fic, not, like, Ulysses fan-fic. Twilight’s themes already borrowed from Pride and Prejudice, Romeo and Juliet, and A Midsummer Night’s Dream, making the Fifty Shades movie a copy of a copy of a copy.

But maybe that’s why we’ve been so collectively intrigued by this casting process: Maybe it’s not the fact that these are roles A-listers have run from as though being chased by a gang of bubonic plague–infected squirrels holding bags of butt plugs, or the mommy-porn factor, or the awkward prose. Maybe it’s the question of whether the film can harness what worked and do away with what didn’t. (First in the guillotine: The novel’s least-sexy repeated exclamation, “Holy crap!”) After all, James’s trilogy captured something that intrigued people, even if by most accounts it captured it poorly.

As our own Molly Lambert said, the Fifty Shades novel “isn’t bad enough to be funny, but it isn’t hot enough to be truly fun.” Bringing the book’s most provocative aspects into a theater has the (uncertain) potential to be an interesting commentary on what we consume in private versus what we take in communally. It could be thrilling. Then again, it could be a monster hybrid of Sharknado, solemn boners, thrusting, and precoital nondisclosure agreements. Either way, you’ll see me there — but not if I see you first.