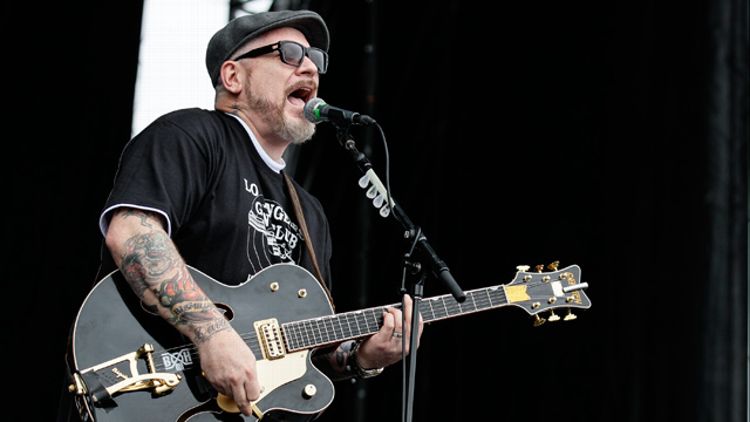 Welcome to Escape From Pop Purgatory, where we check out new music made by people who are more well known than 98 percent of the oppressively “cool” artists over whom the media obsesses, and yet are commonly perceived to be years past the point of their cultural relevance. (Pop Purgatory is fame plus time.) Because we’re unwilling to let albums released by established if unfashionable pop culture institutions come and go without a proper listen, we’re giving these damned souls a shot at redemption — or at least some much-needed publicity outside of their respective fan bubbles. In this installment, we look at a laid-back effort from ’90s rapper/folk singer Everlast.

Period of Peak Fame: 1992 and ’98. Everlast first came to prominence as the front man of mookish Boston rap group House of Pain, which made one of the most enduring “golden age” rap hits, “Jump Around.” In a recent Rolling Stone interview, Everlast forwarded the not-wholly-outrageous theory that “Jump Around” remains a popular jock jam due to its inclusion in 1993’s Mrs. Doubtfire, “because everybody plays that movie for their kids.” The success of Everlast’s gravelly folk-rock solo hit “What It’s Like,” however, can’t be so easily explained away with a cross-dressing Robin Williams family vehicle. “What It’s Like” is one of the most annoying hits of its time — it sounds like Uncle Kracker trying to rewrite “Walk on the Wild Side.” But it was also the main reason why 1998’s Whitey Ford Sings the Blues moved 3 million units. (That’s not rain, just the tears of record executives.)

What’s Happened Since: Blame Napster or the lack of a pop hit, but 2000’s Eat at Whitey’s sold way less than the previous Whitey. After that, Everlast kept putting out records that did even less business than Eat at Whitey’s, including 2004’s White Trash Beautiful, ’08’s Love, War, and the Ghost of Whitey Ford, and ’11’s Songs of the Ungrateful Living. In 2006, he formed the rap group La Coka Nostra with DJ Lethal and Danny Boy from House of Pain, but his highest-profile work in the hip-hop community this century was beefing with Eminem. Apparently the feud was squashed years ago, but let’s not forget the song “Whitey’s Revenge,” where Everlast suggests that Em “better run and check your kid for your DNA.”

Where Is He Now: Everlast’s The Life Acoustic is based on a commercial premise so novel and unproven that it just might work (though probably not). It takes songs from previous Everlast records that the public largely ignored and puts them all together in a new, acoustic, stripped-to-the-bone package. So, if you chose not to listen to “Black Jesus” from Eat at Whitey’s or “Stone in My Hand” from Songs of the Ungrateful Living, you have a fresh opportunity to not listen to pared-down versions of those very same tracks.

No matter what you think of Everlast’s discography, The Life Acoustic isn’t an ideal showcase for his limited skill set. As a singer, Everlast’s range goes all the down to a gritty croak and all the way up to a louder gritty croak. As a guitar player, he’s strictly a “dorm dude who hasn’t mastered ‘Crash Into Me’ yet”–style strummer. Presenting these songs unadorned makes everything sound exactly the same, and if there’s one thing the public demands from the man synonymous with Irish rap and hip-hop folk, it’s stylistic diversity.

Representative Track: There’s only one hit on The Life Acoustic, and it’s not “What It’s Like.” It’s the other one, the one that definitely does not belong on a record called The Life Acoustic. Even Everlast seems tentative about performing “Jump Around” in this context — for some reason it goes by “Jump Around?” in the track listing. It’s an apt question, since I was convinced that this version of “Jump Around” was Sublime’s “What I Got” for the first 60 seconds.

Escape From Pop Purgatory: Nah, Everlast looks comfortable right where he is.