Eminem Has Another Complicated Mother’s Day 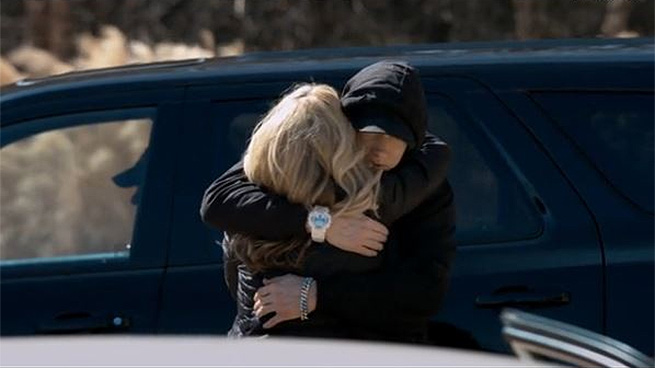 Yesterday, on Mother’s Day, Eminem released the Spike Lee–directed video for “Headlights,” a quasi-ballad, from The Marshall Mathers LP 2, on which he addresses his complicated maternal relations and tries to make amends. The song has been portrayed as an apology to Debbie Mathers — the woman whose addictions, mental health issues, and parental failings Eminem has so vociferously aired out over his career — but it’s not that simple. On “Headlights,” Em’s not saying he was wrong about any of the things he said: He’s just saying maybe he shouldn’t have said them so often, or so loudly. Ultimately, the connection remains as weak as a technicality: “I’ll always love you from afar,” he explains, bluntly enough, “’cause you’re my momma.”

The seasoned Eminem watcher may fondly recall that long-ago time when his mother was actively attempting to portray Em’s side of the story as packs of elaborate fabrications. She didn’t stop at $10 million defamation lawsuits: She took the battle to its logical endpoint, releasing what would unavoidably be labeled as “dis tracks.” On “Dear Marshall,” over a loose simulacram of an ominous Em-preferred beat, she went the spoken-word route, charting out exactly why her beloved son is acting out so: “It was wrong of me and I see it now … giving you everything and never questioning anything you did … you were perfect in my eyes. My unconditional love created a spoiled young man. An angry one, too.” It was pretty fascinating!

Even better, in terms of bizarreness, was “Set the Record Straight,” a track commissioned by Ms. Mathers from a rap group called IDX. “Hi kid, so you like violence?,” one or the other of the IDX fellows asks by way of kicking off the festivities. “Wanna see me feast on Eminem as I break his mother’s silence?” (Later in the same track, the group would go on to use both “jabroni” and a tweaking of the phrase “It doesn’t matter what your name is!” against Eminem, so it’s safe to say they were pretty big Dwayne Johnson fans.)

In 2007 Ms. Mathers would also write a thematically similar book, My Son Marshall, My Son Eminem, which is probably the last time we were actively paying attention to the relationship. Right around then is when Eminem was deep into his addiction, and thus on an involuntary hiatus: When he eventually returned, with 2009’s Relapse, he was very much Eminem 2.0, and the narrative around his career seemed to have long moved past his mother.

Now we’re back in the thick of it. But this time, Eminem — 41 years old, sober, a father — wants to wave the white flag. The video revolves around an incident Em describes in the song: his mother pulling into his driveway as he, his brother Nate, and his daughter Hailie were on their way out for burgers. For the first time, Eminem introduced his daughter to her grandmother. But that’s it: a onetime blip, and then back to a lifetime of cold, hard feelings. It wasn’t exactly a conciliation: Em is still estranged, he explains on the song, still traumatized from seeing 8-year-old Nate get taken away by the state. But he’s not as angry anymore — more than anything, he’s overwhelmingly sad. This is Mother’s Day, Eminem-style.

"I will confess, however, that when Sony called me on Friday with the news, there was brief discussion at the end of the call about the concept of the show living elsewhere, and I was definitely in the “eh” column. For a million reasons, some selfish, some creative, one logistic, five sexual, three racist (in a good way) and, oddly, nine isometric. I won’t bore you with them. [...] But it doesn’t matter right now WHY I’d be lukewarm or if my reasons would be valid, what matters is, I won’t be lukewarm. I’ll heat up." -- Dan Harmon on the idea of continuing 'Community' away from NBC