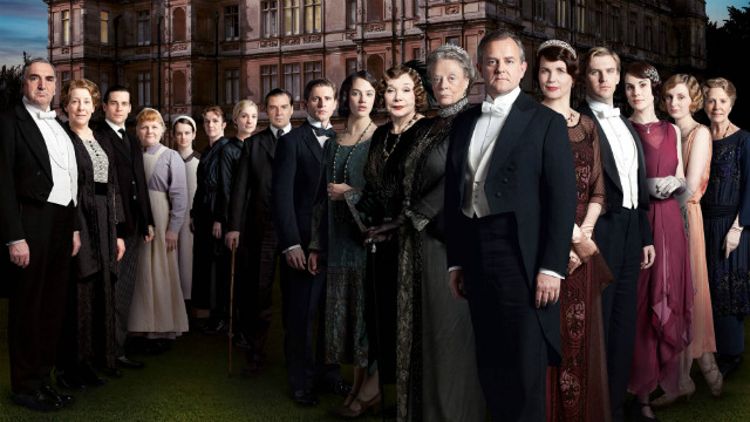 After all the fearsome talk of tumbling over the fiscal cliff, isn’t it nice to be safely back among the upper crust? Downton Abbey returns to PBS’s Masterpiece Classic for its third season on Sunday without so much as a snifter out of place. (The season has already aired in its native U.K. — spoiler-averse Googlers beware!) In the gentle, genteel hands of creator Julian Fellowes, the British smash remains delicious status-porn for restive commoners eager to lose themselves in the warm embrace of empire. While times change — it’s now 1920, and the CGI set pieces of World War I have given way to interbellum uncertainty — the Crawleys, safe in the titular manor house, do not: They’re still dressing up for dinner and dressing down hotheads hoping to sweep away the cobwebs of tradition. (Those employed to literally sweep cobwebs are welcome to stay.)

While cocktails make their scandalous debut in the second hour of Sunday’s premiere, Downton‘s vision of the Jazz Age is a great deal more than an ocean removed from its bloody contemporary, Boardwalk Empire. Where the HBO series uses its pricey period design as a backdrop for class striving and a distinctly American sort of thirst, Downton, the house and the show, is a bulwark against the creeping rot of vulgarity and liberalism. At Downton, men are free to marry their cousins, there’s always a veal and egg pie cooling in the larder, and the most vexing issue of the day is how to properly get a stain out of a bespoke dinner jacket. (Answer: soda crystals. Back to Chancery with the lot of you!)

Of course, it’s easy to joke about a series that culls heart-racing drama from a stack of mislaid dress shirts, particularly so in the overheated meth RV that is our current, Colonial television landscape where perversity is king. (This month alone features the debut of a drama in which Communist spies are the good guys and another that suggests depraved serial killers look like this.) But it’s even easier to lose yourself in the brandy-fueled haze of pleasure and indulgence that Downton offers. The most old-fashioned thing about the show isn’t the freshly ironed newspapers, it’s the uncomplicated embrace of scripted TV’s most primal function: offering a few hours of escapist whimsy in the company of an unbreakable family. It helps that said family, both upstairs and down, is portrayed by a crack cast of theater-vetted sincerity merchants. As lords of their respective levels, Hugh Bonneville (as the unflappable Earl of Grantham) and Jim Carter (as stolid manatee Mr. Carson) make etiquette appear comforting rather than conformist. And, three seasons in, Dan Stevens and the luminous Michelle Dockery (as the still-bantering — although, blessedly, now between the sheets — Matthew and Mary) and Rob James-Collier and Siobhan Finneran (as Thomas and O’Brien, servants more interested in digging for dirt than mopping it) know the steps of their respective waltzes by heart. Not even the return of rabble-rousing Allen Leech (as chauffeur turned son-in-law Branson) or the arrival of the great Shirley MacLaine (as Lady Cora’s goat-milk-sipping American mother) offer much disruption from the coziness of convention. Branson may talk a good game about how tuxedos are the “uniforms of oppression,” but pretty soon he’s putting on the ritz right alongside the rest of them.

What’s interesting is that it was conventions of a different sort that almost felled Downton Abbey in its soapy second season. Despite being tautologically touted as both a “masterpiece” and a “classic,” PBS’s flagship found itself facing problems of a distinctly prime-time variety last year: namely, how to balance the desire to maintain the first season’s wildly popular status quo with the modern serial’s voracious need for story. Television shows these days are defined by and dependent on change — and yet the appeal of Downton Abbey is that it presents a world very much preserved, well, not in amber but certainly in treacle. Call it the Dunder-Mifflin Dilemma, after another imported hit that was positively paralyzed by it. Fellowes, a former actor, screenwriter (Gosford Park), and a real-life “conservative life peer,” responded to the challenges in distinctly British fashion, subjecting his characters to a veritable blitz of insanity — including temporary paralysis, badly burned Canadians, and women’s suffrage — and having them emerge on the other side with upper lips still as stiff as their collars. Thankfully, Season 3 steers away from explosive excess — R.I.P., Ghost Lavinia! Rake your muck elsewhere, Sir Richard Carlisle! — and returns the focus to the family: While Fellowes isn’t able to gin up another world war to keep Matthew and Mary apart, he does have a prison cell separating saintly Mr. Bates from the beatific Anna and some new financial worries to furrow Lord Grantham’s brow.

From what I’ve seen so far, Downton returns much improved. But it has also been exposed: It turns out the sudsier aspects of Season 2 kept reality at bay in more ways than one. Now, as the cracks in England’s caste system begin to appear onscreen, it’s more and more evident on which side of the divide Fellowes himself falls. The idea of the Crawleys potentially moving out of Downton and into a slightly smaller mansion is presented as catastrophe, not common sense, and it’s hard to find much heroism in their tight-lipped tolerance of an Irishman in 1920, let alone 2013. Burned by the stock market (and desperately waiting for an inevitable bailout in the form of a miracle inheritance), the earl sounds both clueless and contemporary when he blusters on about how one-percenty estates like his are society-enriching “job creators.” Trapped in another kind of big house, even the ever-noble Mr. Bates somehow finds time to get choked up at the thought of his old boss being brought low. More than ever, the divided classes inhabiting Downton are bound together. Not out of modernization or familial love, but out of fear: Both floors appear doomed for extinction.

There’s a moment in Sunday’s premiere when the still-quippy Dowager Countess remarks that it’s “encouraging to see the future unfurl.” To which her rival, MacLaine’s Mrs. Levinson, replies, “as long as you will remember it will bear no resemblance to the past.” The Yank may be right, but to Fellowes it’s a tragedy, not an opportunity to shake things up. A more challenging show might dig deeper into the shared obsolescence of the serving and ruling classes, take time to consider whether a lifetime spent swanning about penning letters and petting dogs might ultimately prove as unfulfilling as decades of sewing cuff buttons and scheming. But again and again Fellowes ignores the interesting bits lurking further afield — last season it was the aborted voyage to America, this year it’s a honeymoon in France — in favor of the reassuring ones close to home. In doing so, he runs the risk of making Downton more about what the stodgy house represents than about the rather more interesting people who inhabit it. On Sunday, there’s a beautiful shot of unlucky Mr. Moseley running breathlessly toward the giant manor; part of me couldn’t help but think a smarter man might be running away.

But Branson’s po-faced polemics at dinner make it quite clear how unwelcome politics are at Downton, and I’d hate to be thought of as rude. It’s still wonderfully pleasant to be swept away on the breathy tides of Elizabeth McGovern’s baby voice, to idle an hour near the yeasty warmth of Mrs. Patmore’s kitchen. At this point, Downton‘s limitations are clear: It’ll always be a delicious trifle, not a more nourishing Sunday Lunch. He may be stubborn — he may even be delusional — but Grantham will never let go of Downton. Neither will Fellowes. And when you get down to it, neither will I.