Does the Terrifying ‘Devil’s Due’ Viral Prank Bode Well for the Movie? 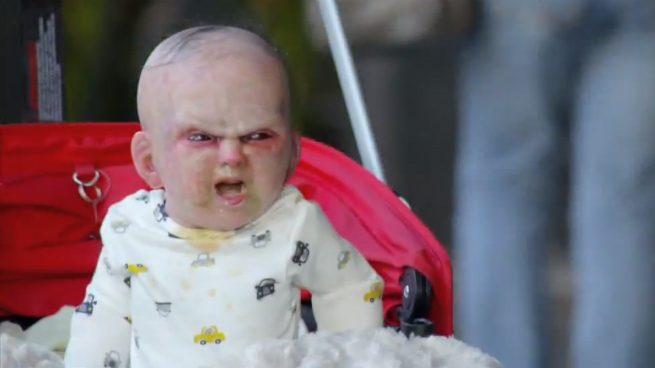 The creative team behind Devil’s Due, opening this Friday, probably weren’t stoked to learn of NBC’s Rosemary’s Baby remake, which just added Zoe Saldana to its cast. Along with the recently released (and mostly ill-received) Hell Baby, it’s clear that Satan has run short of condoms, and his evil infant army is storming the screens of America.

Devil’s Due also faces the challenge of found-footage fatigue in the wake of Paranormal Activity: The Marked Ones, the fifth installment of the franchise, which was a critical — and box office — failure. Devil’s Due, however, has a tight trailer and the Eli Roth stamp of approval. Last week, Roth told a preview audience that “I have no involvement in the movie whatsoever, but Fox was cool enough to show the movie to me and I absolutely was floored. I loved it.” There’s also the fact that the found-footage construct has a little more purpose here than it did in the follow-ups to the first Paranormal Activity, because it capitalizes on our bloggy inclination to create life-logs for our unborn children (because, obviously, the first thing our babies do after exiting the birth canal is ask to read our diaries and look through our wedding albums).

Devil’s Due focuses on Zach (Zach Gilford, of Friday Night Lights) and Samantha (Allison Miller, recently of Go On), a couple preserving their memories on film in advance of the birth of their first child, beginning just after they get married. The built-in suspense of pregnancy provides a natural stage for horror, which — besides its basically flawless execution — is one of the reasons Rosemary’s Baby is such an ironclad classic. I’m not totally against the upcoming remake of Roman Polanski’s movie, but I would argue that it’s not entirely necessary. In a way, Devil’s Due (which co-director Tyler Gillett acknowledged had “borrowed things” from Rosemary’s Baby) is freed up by being able to pick and choose its references, whereas Saldana will be stuck in the restrictive maternity pants of comparisons to Mia Farrow.

When Roth tweeted a warning for viewers to refrain from “pre-judg[ing] Devil’s Due because Rosemary’s Baby is a ‘holy grail’ movie,” it felt like he was acknowledging the unfortunate confluence of horror brains that had created a traffic jam in devil-baby alley. What could its creators do to set it apart? How could they form personal connections between the movie and its prospective audience? How could one evil newborn set itself apart from the others?

The Carrie coffee-shop freak-out of 2013 looks positively quaint now. A remote-controlled baby carriage was sent out into the New York City streets with a freakishly realistic animatronic infant inside. The baby looks rheumy, spits up white liquid copiously, and gives the finger to passersby when it feels so moved (like when it cruises up to an NYPD patrol car). People scream, understandably, and the kid howls back, probably sending them all to CVS for prophylactics and some Benadryl to knock them into a sleep where PTSD nightmares can’t reach them. I’m pretty sure all the footage of real parents — who know this is just how 100 percent human babies react to a shopping errand at Target — trying to remove the child from the stroller was cut.

As I write this, the video (which was posted to YouTube yesterday) has amassed more than 2.5 million views, but Carrie faced a slow box-office start despite its viral marketing prank (which now has more than 53 million views), though it bears mentioning that it was up against Gravity. The “prankvertising” for both horror films comes courtesy of Thinkmodo, an agency that offers a viral marketing alternative for low-budget films.

Prankvertising is probably better experienced on YouTube than in the flesh. I don’t say this lightly, but I probably would have pissed my pants if I had been vomited on by a robot baby on my way to brunch (maybe it didn’t look as real in person — whatever! So glad I don’t have the answer to this!). The prankvertising spoofs featured on Adweek in November are suddenly not so far-fetched. But maybe Devil’s Due had no choice: Satan has been a player, and now all of his spawn must play the game.