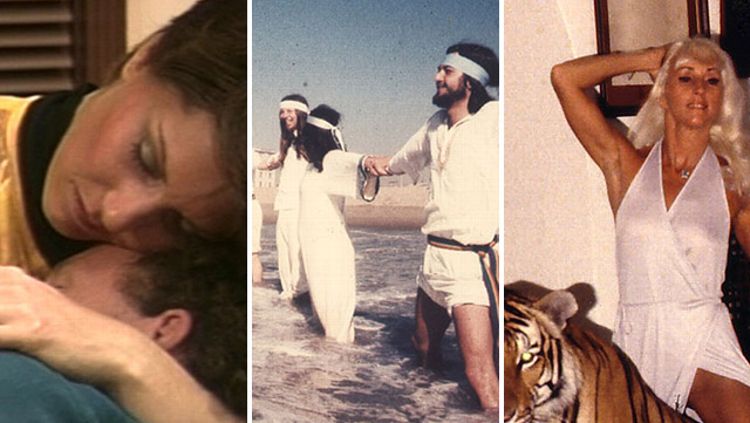 The Source Family is one of the most aspirational documentaries in recent memory, and has been widely hailed as such since it made its way across a limited release and onto iTunes last month. Its members, including a leader who had curated his style to resemble Michelangelo’s God, seemed to have been placed into the Source family by a casting director. The doc on the successful Utopian social experiment includes scenes of beautiful hippies in maxi dresses cozy in their sleeping cubbies and birthing babies into their own hands as they labor soulfully among their fellowship. Their restaurant, the Source, was featured in Annie Hall and served salads to John Lennon and Julie Christie. Their band, Ya Ho Wa 13, released psychedelic rock albums that have become collector’s items, and some members of the family faithfully cling to their commune-given, legally recognized names, including Isis and Electricity Aquarian (no blood relation; Sourcies took Aquarian as their last names), two members whose book The Source: The Untold Story of Father Yod, Ya Ho Wa 13 and the Source Family provided the basis for the documentary.

Father Yod billed himself as the father you always wanted, the kind who would give you tantric sex lessons, coach you on smoking the sacred herb, and buy you a mansion to live in with 150 of your friends. Even when Yod turned his attention to studying “sex magic” and took the family on what turned out to be an ill-advised relocation to Hawaii (after the police became suspicious about the fact that the Source children weren’t getting access to medication) and the commune fell apart (rather dramatically, because it involves an amateur hang gliding accident), most of the doc’s interviewees claimed to have a lingering fondness for that period and no regrets over their involvement. Well, except for one.

Though The Source Family never fails to be interesting, mostly because of the inclusion of a ton of footage shot by Isis (née Charlene Peters, who lived her pre-Source life as a pageant princess and photographer’s assistant), the most compelling character is the one who was “broke[n]” by the experience. Robin, who would become a mother figure for the other individuals in the Source, was not the first or last love of Yod. Before Yod met his first “spiritual father,” he was Jim Baker, a war hero and judo expert who had supposedly “killed two people with his bare hands” and successfully gotten away with bank robbery. He divorced his first, secular wife and embarked on his spiritual journey (with a pit stop to try his hand at being a stuntman), marrying Robin. After a brief period of marital bliss, Yod informed Robin that he intended to take additional wives (no big deal, just like 13 of them) from within the commune, which, as you can imagine, didn’t sit very well with his other kaftan-wearing half.

The Source Family is anything but cynical, yet Robin’s story, as told through footage of her idyllic wedding to Yod (visibly grimacing as he made his new bride Makushla his favorite mother/angel) and contemporary interviews, during which she clutches a framed photo of Yod, anchors the Source saga in reality. Robin’s experience was different than that of the others: Even Magus (middle name “The”) Aquarian, whose son’s ear infection caused him to split from the group in pursuit of forbidden antibiotics, has peacefully accepted these years as a kind of gleeful, regretless ’70s romp. Robin was a lone wolf: the harsher of mellows, a stubborn stain on the white cotton vision that couldn’t be erased with bleaching lemons and meditation. The other voices drown hers out, and the experience of watching The Source Family is like flipping through a lifestyle catalogue and spotting a tiny dead cat at the outside corner of a photo spread. The effect is haunting, maybe because it makes you realize that you’ve been manipulated and seduced by the oral history of Yod as much as any of the inhabitants of the Mother House were. Of course Robin felt betrayed and abandoned, but something in you is pulling for her to get over it, to transcend these negative vibes and prove the utopia into existence. Clearly, the Source was not a perfect system, but it looked like it came so close to offering a satisfying holistic experience that you want to believe it actually did.

The foil to The Source Family is the mid-’80s-based Private Practices: The Story of a Sex Surrogate. There is nothing particularly enchanting about it — it’s a dressed-down psychological study and, despite the nudity, it is about as sexy as sitting in a dirty puddle of iced coffee. But this is one of those movies that gets its hooks into you in ways you don’t realize until later.

It focuses on two men, Kipper and John, who allow their sessions with a therapist-surrogate to be filmed (how, sweet Lord, and why?) and their neuroses laid bare against love coach Maureen Sullivan’s bosoms. Boning in the Source house? Cool, your whole spiritual family will be wandering in and out, and you won’t even notice because your third eye is having an orgasm that temporarily blinds you to outside stimuli. In Private Practices you have the “problems with vaginal infections [that were] a real burden” on Maureen or the tricky temporal issues like emotional attachment that can make having multiple partners (or clients) at one time a real drag. Even Maureen, the teacher of affection, admits to being “clingy” in her own relationships and has “a lot of growing up to do” before she thinks she can settle down. She claims to practice surrogacy as a means of education. Neither she nor John nor Kipper seems happy, and in the end John turns out to be the least happy of all, because he falls in love with Maureen, who predictably rebuffs him. It’s perfectly awkward and heartbreaking, and having zoomed so impolitely and greedily close to these people in their extreme vulnerability is intense. The embarrassment you may feel upon renting a movie called Private Practices only enhances its impact, especially if any ’80s imagery inadvertently conjures your parents’ dinner parties. Nothing to get off on here, just sads.

A good way to split the difference between stark, anxious booty sessions and sensual flower children is the 2008 HBO documentary Cat Dancers. The film floats over the long and lustrous history of Ron and Joy Holiday, a married couple who began their entertainment career together as dancers before making a few additions to their routine — first exotic cats, then an exotic circus recruit named Chuck. It’s the most baroque of the three films, and like The Source Family features plenty of archival footage and eschewing of monogamy, but it’s also a decidedly tragic portrait of a certain specific kind of idealism (the kind involving extremely naive animal husbandry). Instead of being jealous of each other, the issues of the Cat Dancer trio get all tangled up in tiger tails and complicated by trust misplaced in animals. [SPOILER ALERT!]

Ron, the lone survivor of the two Cat Dancer massacres, is bewigged and bereft and seems to have been affected by, but immune to learning anything from, the horrors of his experience. He says that when he’s 80 he wants to move to a monastery where monks and tigers can be friends. What can possibly explain this? This is just one of those weird human mysteries, like a rat getting zapped repeatedly while struggling to get that elusive treat.

The Source Family, minus Robin, comes off as aspirational because it’s rare to see people look back on an eventful period of their lives without a shred of regret (or puncture wounds from wild animals). That regret can be fascinating, but doodling hearts over the bummer bits sure makes for a pretty memory, even if it is just a brainwashing contact high. Borrowed nostalgia can be a bleak thing, making you feel like Alvy Singer eating a plate of the Source’s mashed yeast and alfalfa sprouts, the sober outsider peering in on a cast of intoxicated strangers. But listening to the accounts from gray-haired erstwhile Aquarians, you get it. Maybe there’s something to that mystical, non-judgmental acceptance that makes it painless to snuggle up to your memories. It’s certainly a refreshing glass of Kool-Aid.