Do Zombies Poop? An Investigation 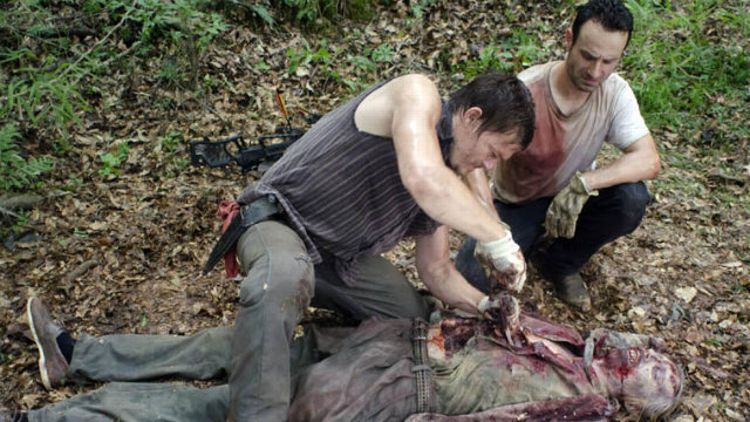 Late last night, in accordance with New Media for the Modern Showrunner Handbook guidelines, The Walking Dead executive producer Glen Mazzara took to Twitter to interact with fans of the series he inherited halfway through its tumultuous second season. While he did respond to queries — like, “Michonne is the most unrealistic character from the comics, why choose to bring her in?” and, “Which of the survivors from S2 would u want to party with?” (Answers: they have a good storyline for her; Maggie) — he notably dodged one inquisition, which, in fairness, perhaps could have been posed in a more clinical fashion to better communicate its unquestionable import: Do zombies poop?

Still, dodge he did. While it’s certainly possible he didn’t answer because the question has never come up for debate during lulls in marathon writers’ room sessions either devising new ways for Carl to be placed in mortal peril or considering more canonical debates over the function of the undead gastrointestinal system* (why not knock out both by having the kid stumble upon a zombie hiding in an outhouse?), it felt like maybe Mazzara was just avoiding opening that particular can of undigested worms.

[*Remember when they cut open that zombie’s stomach to search for Sophia’s remains? The show’s characters apparently believe an undead GI tract still works. Hmmm. And: Is it instructive that tracker Daryl chose to dig around in the zombie’s body cavity looking for masticated chunks of the little girl rather than scour the nearby ground for extant piles of flesh-flecked zom-turds? Hmmmmm.]

So what’s the answer? A brief office discussion yielded no satisfying conclusion; some thought that a zombie’s constant search for “sustenance” implies that their “eating” constitutes a bodily function identical to that of their living human incarnation, and their “food” must be handled in the same way, thus: They “shit.” (Though whether this elimination is actually digested matter or merely raw material traveling through whatever is left of a zombie’s gastrointestinal system was not explored; is this just splitting hairs, or a crucial distinction? The “necrobiological process vs. simple gravity question” might be a separate debate entirely.) Others think zombies “chew” more than “eat,” just gnashing away at any available flesh with no concern for any “nutrition” the incidental “feast” may provide, not unlike a ravenous birthday party of 10 furiously searching for the bottom of an Olive Garden Never Ending Pasta Bowl. With no definitive answer forthcoming, we turned to the Internet, which, unsurprisingly, finds itself yearning for closure of the very same existential question:

First, a trip to Yahoo! Answers, perhaps the most democratic forum known to humankind:

“No. Zombie’s bodies don’t function like living humans. They don’t live off eating the flesh of the living, they just have a desire to bite things that are alive. Whatever enters their stomach doesn’t get digested, it just sits there.”

Can we all agree this response lacks the intellectual rigor we’re so desperately searching for? Let’s try a headier forum, one where it would be more likely to encounter a Ph.D. candidate in Zombie Studies. MetalFilter user “prinado”:

The Zombie Survival Guide: Complete Protection from the Living Dead (Amazon) asserts that zombies do not retain the digestive functions of living humans:

(p. 11-12) “Recent evidence has once and for all discounted the theory that human flesh is the fuel for the undead. A zombie’s digestive tract is completely dormant. The complex system that processes food, extracts nutrition, and excretes waste does not factor into a zombie’s physiology. Autopsies conducted on neutralized undead have shown that their ‘food’ lies in its original, undigested state at all sections of the tract. This partially chewed, slowly rotting matter will continue to accumulate, as the zombie devours more victims, until it is forced through the anus, or literally bursts through the stomach or intestinal lining. While this more dramatic example of non-digestion is rare, hundreds of eyewitness reports have confirmed undead to have distended bellies. One captured and dissected specimen was found to contain 211 pounds of flesh within its system! Even rarer accounts have confirmed that zombies continue to feed long after their digestive tracts have exploded from within.”

Ah! So zombies are more likely to explode from the accumulated mass of devoured material than poop out said material. Case closed!

Assumptions:
1) Zombies need nutrition and are not kept alive purely by evil magic
2) Zombies get nutrition more or less the same way the living do, by eating & absorbing nutrients in the stomach.
3) Cranial lesion information from the living can be used to diagnose damaged areas in the undead.

While I’m sure there’s a lot of debate in the literary field, this medical student is fairly sure that so long as Zombies ingest matter and gain nutrition from it, they will have to excrete it through their bowels. The vomiting L4D zombies can’t have absorbed much nutrition, as there’s not a whole lot of absorption in the stomach– most absorption takes place after you’re through the duodenum. This would make L4D zombies INVALID ZOMBIES.

Further, judging by zombie behavior (aggression, ataxia, aphasia, problems with gait and higher-order processing), we might expect to see lesions in the prefrontal cortex (aggression/personality), Broca’s and Wernicke’s areas (speech production and comprehension), and either the primary/supplementary motor corticies or (more likely) the cerebellum (ataxia, shuffling gait). That zombies don’t seem to sleep might indicate a mid-pontine lesion, but that would take away a lot of the higher-order predation functions that most zombies exhibit, so I’d chalk the insomnia up to some thalamic issue– maybe underactive VLPO.

So we can assume a sick brain. The thing is: the brain isn’t totally in control of the digestive system. Distal esophagus and down are controlled largely by the enteric nervous system, which is an incredibly complex processing network (and only modulated by the CNS). Thus, even with a sick brain the zombies would most likely have normal excretory habits, albeit without the conscious sphincter control (CNS) exhibited by most of us living folk.

Your answer, then, is yes. Zombies poop. The probably also pee. It’s likely that they’re doing these things almost constantly. This isn’t to say that the zombies can’t have digestive issues that would prevent them from pooping, and I’d get more into zombie gastrointestinal pathology, but that’s next year’s course and I really don’t want to speculate on zombie constipation. Anyway, I hope this helped and please wish me luck on tomorrow’s neuro exam.

Yes, one could summarily reject the preceding assumptions and essentially undo that beautiful, Quincy-quality line of medical inquiry, and then we’re right back where we started. Perhaps, then, this is more a question of faith than science, of philosophy versus empiricism. Maybe there can be no satisfying answer.

But in the immortal words of that poster on Fox Mulder’s office wall: I WANT TO BELIEVE.

Filed Under: The Walking Dead, Zombies