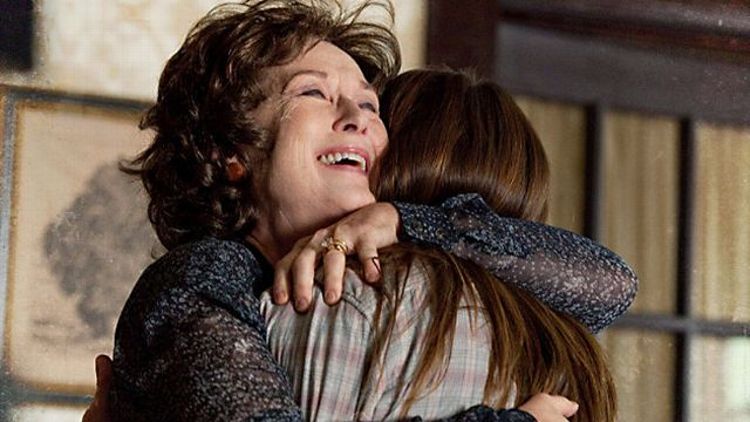 What are the TV ads for this new Meryl Streep–Julia Roberts movie trying to tell us? For the record, it’s called August: Osage County, but no one’s going to say that, because what the hell is an “August: Osage County”? Besides, once you leave the theater you’ll just be calling it Meryl & Julia: SVU. The ads are selling what looks like Steel Magnolias if the whole movie were set at Shelby’s funeral and M’Lynn were a vampire.

The ads — which are terrible, by the way — tell you it’s a comedy, but nothing anyone says or does onscreen is funny. The portion of the audience that not only knows that this movie is based on Tracy Letts’s play but has actually seen it will get how misleading this is: Where’s the fire-breathing? A smart marketing team would have known that people will come for both the laurels and the laureled — the posters use the words “Tony” and “Pulitzer Prize” like cleavage — but they’ll stay because Meryl Streep uses the word “fuck” the way Paula Deen used fat. This isn’t acting, what she’s doing. It’s deep-frying. Why not sell that? We’ve already seen Streep bake a cake. I think we can stand to watch her make cronuts. Sell the spattering grease.

Letts’s play is a disaster epic disguised as a family-reunion drama. It’s soapy and sitcom-ish, but the longer it goes on the more tragedy it gathers. This is classical stuff: Gothic, Hellenic, General Hospital kind of drama. Letts wrote the screenplay, which the television veteran John Wells directed. Their movie begins in a funk of melancholy. A poet named Beverly Weston (Sam Shepard) sits in an Oklahoma house with Johnna (Misty Upham), the Cheyenne housekeeper he’s just hired. He eloquently explains what a drunk he is. He tells her that his wife, Violet, has “a touch of cancer” and lists the pills she takes almost as a sport. He mentions that she’s mean. A scene later, he’s gone.

His disappearance draws the scattered family back to the house: the three Weston daughters — Barbara (Roberts), Ivy (Julianne Nicholson), Karen (Juliette Lewis); Barbara’s estranged husband, Bill (Ewan McGregor), and their moody 14-year-old, Jean (Abigail Breslin); Karen’s oily bozo fiancé, Steve (Dermot Mulroney); Violet’s sister, Mattie Fae (Margo Martindale), Mattie Fae’s husband, Charlie (Chris Cooper), and their dim, stunted son, “Little” Charles (Benedict Cumberbatch). Their assorted resentments are imaginable. They’re the kind that have been fueling the American theater for almost a decade. Barbara decamped for Colorado. Karen went to Florida, and Ivy stayed behind and was crowned caretaker. Violet doesn’t waste an opportunity to twist a knife in Barbara for leaving and in Ivy for settling into spinsterhood. Wells has Streep wander around the house with and without her big black wig so that she’s a part-time ghost and part-time chain-smoking nuclear storm cloud.

The movie’s stress falls on Roberts’s face. Barbara has modeled her life more on her father (she’s an academic), but the minute the emotional temperature goes up, it’s obvious that she’s her mother’s daughter. (The gray at the roots of her hair matches Violet’s, too.) This is another of Roberts’s mother superior parts. She brays and singes and, at least once, takes a swing, because she knows she’s more right than any person in the history of rightness. Those teeth made her a star. That temper kept her one. The beauty of her in this movie is that she finds something human in the character and holds on to it, even as prolonged exposure to Violet proves psychically radioactive. Eventually, she’s running around in a bathrobe and pajamas like a loon.

This is the sort of material that a good actor wants to live up to. Roberts makes Letts’s dialogue sound like her own. “Thank god we can’t tell the future or we’d never get out of bed,” she says at some point. “Don’t go all Carson McCullers on me,” she says at another. Nothing on the page of Letts’s play goes that deep, but the further out the story goes the stronger the undertow is. Some actors, like Mulroney, Breslin, and McGregor, drown in it. But Cooper, Martindale, and Shepard are expert surfers. To all the hipster filmmakers treating Shepard like a garnish, this is how you use him like a side dish: as a prevailing spirit.

Unlike Roberts, Streep has played an actual mother superior. There are some movies in which all she does is rap knuckles. Here everybody’s hands should be sore. There’s a long sequence in which Violet, high on everything, sits down for family dinner at the head of the table, dressed in undertaker’s black. Spewing lava and hurling lightning, she carries on the way Faye Dunaway’s Joan Crawford did before the Pepsi board in Mommie Dearest: Don’t fuck with me, boys.

There is a person in that performance, but Streep isn’t playing that person. She’s playing Violet’s disease: mouth cancer. It’s one of those performances she can give that’s all evocation and technique, like her Margaret Thatcher. But here the superficiality of the part seems right for a woman who has drugged herself to stay high above the ugly depths of the past. It’s as if Streep thinks Violet is as big as King Lear and Richard III. Her creation, though, is as dictatorial and demonically self-obsessed as Saddam Hussein and as close as Euripides’s Medea will ever come to Tyler Perry’s Madea.

This is all to say that I’ve been wondering whether Streep would ever have her Shining/Mommie Dearest/Scarface moment, where she gives a performance beyond any hope of recovery that freezes her forever in the public consciousness. It didn’t happen with She-Devil, Death Becomes Her, or with the finale of Adaptation, with her murderous in a swamp. (Comedies bring out her gonzo side.) It didn’t even happen with The Devil Wears Prada, either, where, ingeniously, she took the part in the opposite direction of Dunaway and Glenn Close; she went under-the-top. Now she’s too much of a shape-shifting legend to be stuck in any one part — she’s like Madonna. But had Streep played Violet in 1983, her career as we now know it might be over.

August: Osage County should end with the camera on Violet dancing to Eric Clapton in her living room. It’s a triumphantly batty, semi-tragic image. But Wells and Letts concoct both a more overtly optimistic ending and a more grotesque, Crash-like one that the movie doesn’t need. Letts wrote a play about emasculation and maternal tyranny. His missing patriarch has a woman’s name. His antagonist is an “n” away from “Violent.” Barbara spends most of the play being called “Barb.” The mothers here are awful. The fathers are flaccid. Violet resents men for both personal and cultural reasons. Her emotional violence and emasculation aren’t the defense of all women against all men, just a defense of herself against some. Osage County is various configurations of Shakespeare grilled by Edward Albee and Tennessee Williams at a Greek diner. This is what a painter like John Currin does with the Renaissance: rethinking ancient art without forgetting what makes it entertaining.

For half an hour or so, the movie is actually indistinguishable from one of Perry’s family-meltdown dramedies. The squawking and insults, bad blocking and chaos are similar. So is the way the audience — a predominately white one — gasps, laughs, and goes “oooh” at the shocking revelations. But Letts knows what he’s doing a bit better. He relies on the power of dramatic structure where it feels like Perry is relying on himself. Letts’s play has control without any of Perry’s understandable control-freak compulsions (you still feel the latter fighting to remain independent). Letts leaves himself open to interpretation. Perry leaves himself open to none. Osage County boils, then burns. Wells’s film doesn’t hold together as incriminatingly as the play does. There’s something truly terrifying about being trapped in an auditorium with the Westons for more than two hours — their poisons poison you. The movie will be remembered as a showcase for its stars. You don’t use Oscars to measure that. You use the Richter scale.