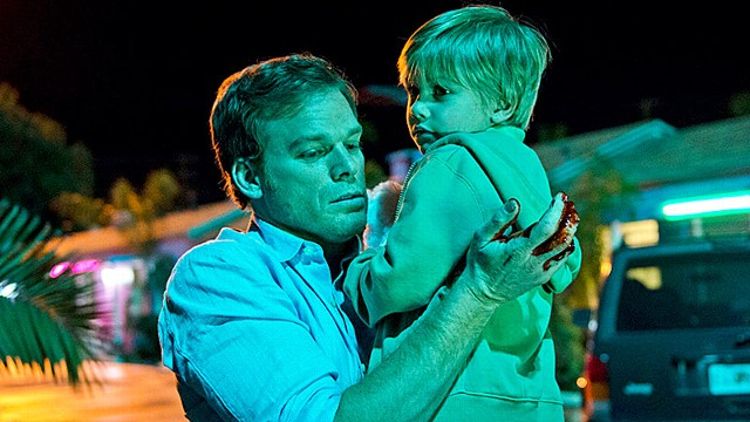 Note: There are tons of spoilers here, but why are you reading this if you aren’t current with Dexter?

Last night, Dexter kicked off its eighth and final season. At the end of Season 7, Dexter (Michael C. Hall) had just emerged from a shipping container alongside his sister Debra (Jennifer Carpenter). It was New Year’s Eve, and Debra’s year was about to be off to a very bad start. She had just killed police lieutenant Maria LaGuerta (Lauren Vélez) on her brother’s behalf. The two slowly wandered into the new year, with bright, celebratory lights shining in the background. Unlike many of its fellow Sunday night shows, Dexter has never excelled at nor seemed particularly interested in subtlety. In hindsight, the fireworks at the end of last season should have been an indication that this final season would be an explicit exploration of what Dexter has become.

What do you do when your adoptive sister who has recently professed her love to you finds out that you’re not aloof but rather an extremely prolific serial killer? If you are Dexter Morgan, you return to your regular-guy routine. The season premiere opened with a dreamy montage of Dexter with his son, Harrison. (This kid is getting big. I miss baby Harrison.) It was the kind of scene that used to run at the end of episodes, when Dexter would return to his family to play house following a kill — before John Lithgow’s Trinity killer murdered Dexter’s wife, Rita (Julie Benz), in retribution at the end of Season 4, before Deb walked in on him as he murdered Season 6 villain Travis Marshall (Colin Hanks). Harrison runs through a field playing with a kite while Dexter’s voice-over tells us that “there’s nothing like a crisis to help define who you are.” The voice-overs have always been one of the worst aspects of this show, though Hall recently suggested that perhaps those statements should not be taken at face value: Dex may not be the most reliable narrator. In this case, the cringe-inducing voice-over is there to tell us that Dexter wishes he could simply return to his attempts at domesticity like he did for so many years. But in earlier seasons, he slipped back into the role of father and brother because the lie didn’t require any complicit parties.

Unfortunately for the Morgans, Deb is not just an accomplice but a coconspirator now, and she controls Dexter’s future. Since killing LaGuerta, she has left Miami Metro, become a PI, dabbled with drugs (possibly for work, though I think the motivations behind her coke use were deliberately ambiguous), hit the bottle hard, and started sleeping with someone she’s supposedly investigating. So she’s a mess — though her mental state seems inversely tied to her fashion sense. After seven seasons of ill-fitting button-downs and jeans, Deb has found flattering clothes and an inspiring ombré hairdo. Even more surprising than the aesthetic turnaround is that watching her degrade herself with the pursuit of stolen jewelry is truly sad. It was hard to imagine that Dexter’s uncouth sister from Season 1 would ever be a main attraction on this show. Even if Carpenter isn’t exactly on Hall’s level as an actor, Deb has been given a depth over seven seasons that transcends the performance. The downfall of Deb is more upsetting than the potential downfall of Dexter. She hates herself for killing LaGuerta (duh) and hates him because he made her compromise everything about herself. If that’s the case, how can Deb ever recover without turning herself in, which would expose Dexter? Season 8 seems to be as much about Debra as Dexter, a testament to how important she has become.

Even the first kill of the season is Deb-centric. Dexter is an admittedly formulaic show, and most season premieres include a kill (or a near-kill) that sets the rest of the season in motion. In this case, Dexter kills the guy Deb is investigating, and that’s really all you need to know because it was clearly secondary to the larger Deb story line. More importantly, that kill was nearly unrelated to the introduction of the new menace in Dexter’s life, Dr. Evelyn Vogel (Charlotte Rampling). Vogel specializes in serial-killer psychiatry (or something), and she comes to Miami Metro because of the new “brain surgeon” killer — a serial killer who, before dumping the bodies, removes the part of the brain that feels empathy. While lurking around the police station, Vogel seeks out Dexter to ask about the Bay Harbor Butcher, which was the primary case in Season 2 and the case that led LaGuerta to investigate him last season. It has been satisfying to see the writers address the same holes that viewers noticed, but the fixation on Season 2 has nearly obfuscated the intermediate seasons. In addition to Lithgow’s brilliance in Season 4 and (controversial opinion alert!) Julia Stiles’s in Season 5, wasn’t the brutal murder of Dexter’s wife and subsequent recovery with Lumen (Stiles) important enough to figure into Dexter’s larger narrative? At the end of the premiere, Dr. Vogel reveals that she knows about the code by which Dexter selects his victims, and thus that he is a serial killer. Maybe she’ll address the middle seasons in her homicide therapy, but at this point, those seasons seems more instructive about how Deb has grown rather than Dexter.

Ultimately, Dexter is still our narrator, and we are still voyeurs. This is a Miami that viewers only know through the lens of our favorite psychopath. Dexter thinks he knows who he is, as a dad, as a killer, and as a guy pretending to be normal. But that guy is cracking. In just this first episode, he lost his temper three times, nearly lost his son while he was killing someone, and conceded that he was telling a lie (in admitting to Quinn that he didn’t know Deb’s whereabouts). Dexter’s lies have gotten so elaborate that he can’t keep them all going. And if he weren’t under enough pressure already, he also has to manage three women knowing his secret. There’s Deb, Vogel, and the ever-present threat of Hannah McKay (Yvonne Strahovski), the florist from last season with a penchant for poisoning people. She’ll be back at some point. It’s hard to imagine that a serial killer can continue to operate this freely when so many people know what he does, especially when they’re a former detective, a sinister therapist, and a fellow killer. Then again, I never thought I’d be rooting for Deb either. Dexter’s demise seems inevitable, and while it has seemed that way by necessity in every season, this is it. If Dexter is going to go down, this is the time.