Dan Harmon on Community Exit: “I Always Said They’re Gonna Fire Me. I Know It … They Hate Me.” 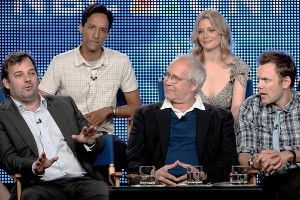 Dan Harmon has been nothing but up-front about the whole “getting fired as showrunner of Community” thing. But this time Harmon’s not chatting on his Tumblr, as is his standard M.O., but in an actual, real human conversation. Sitting down with Marc Maron for an interview on Attack of the Show, Harmon was candid and resigned about his departure, even going so far as to say it was partially a relief to lose his job: “At this point I was doing it for the fans. These are people who will make you weep. These are 16-year-old girls who decide they want two characters to be together and they make YouTube videos and spend more time editing them than the people who edit the television show.” There’s also a lot of hamburger, cigarette, pacifier, and crack-rock metaphors. Check it out if you want to know more about the situation from Harmon’s point of view, or if you at least want to confirm that Harmon hasn’t become a rampaging vengeance-mad hermit.

The Killers Are Back!