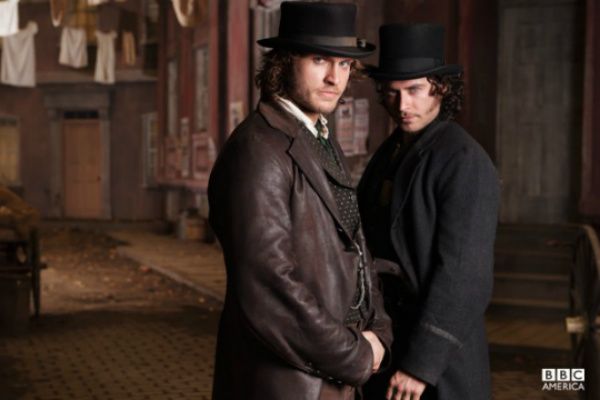 Picture a show set in the New York of another century, a gritty drama where overburdened, ethnically accented police patrol a nearly unrecognizable city and are prone to foul language, shocking bursts of violence, and dubious definitions of morality. That show is called NYPD Blue, and it takes place in the long-ago year of 1994. It’s also, give or take a few horses, Copper, the first original series from BBC America, debuting this Sunday night at 10 p.m. EST.

Copper may be set in an even earlier era – 1864, to be exact, just as the Civil War was ending and the brutal gang violence in lower Manhattan was boiling over – but the tropes in which it traffics are even hoarier. Greasy but gentlemanly Detective Kevin Corcoran – Corky to his friends and whores – is an immigrant war hero turned lawman who, unlike his descendent Sipowicz, is actually encouraged to shoot first and ask questions last. There is macho bluster, kindness towards children, and a conspiracy that, inevitably, goes all the way to the top-hat-and-tails-wearing top. Depending on their status, secondary characters either sip brandy or spit blarney. “What a world we live in,” sighs the corrupt chief at one point, though it’s unclear if he’s meant to be differentiating it from our own or merely highlighting the parallels. As for me, I’m more concerned about how similar it is to so many other things on television: even when Corky sucker-punches a murder suspect it’s nothing The Shield’s Vic Mackey wouldn’t do to a jaywalker. Why is it, even post-The Wire, that cop shows still try to surprise us in exactly the same ways?

That Copper disappoints is, itself, extremely disappointing. The show is executive produced by Barry Levinson and Tom Fontana, the team responsible for the brilliant and subtle Homicide: Life on the Street. And while Fontana’s pilot script, co-written with Will Rokos (Monster’s Ball), does a decent job introducing us to the world – Corky’s investigation of a dead little girl takes him from the beggar-filled slums of Cow Bay (if you are a Toronto actor with matted hair and you aren’t getting work as a street urchin on this show, maybe it’s time to think about a new career) to the gilded drawing rooms of 5th Avenue – it has a much harder time selling it. Expository clunkers land more heavily than the walking-stick that offed the aforementioned lass – my favorite: “Finding this girl’s killer isn’t going to bring your daughter back, Corky!” (Corky’s response? A gruff, “Shaddup!”) – and dialogue-free scenes are drowned in flutes, fiddles, and other Celtic clichés.

Further complicating matters is the budget. In order to make a splash in the scripted space, BBC America clearly dreamed bigger than the villainous Winchester Haverford (!) but the financial reality appears closer to Annie, the orphan girl who offers to trade her body for a boiled egg. Shooting on a Canadian sound stage, director Jeff Woolnough makes the best of a challenging situation, but there’s a skewed, sepia-toned gauziness to the proceedings. Daylight scenes tend to resemble the EPCOT version of Five Points. It’s less old-timey and more Old Time Family Photo.

Through it all, the drama remains, like Corky’s beloved eggs, on a decidedly slow boil. In the lead role, Tom Weston-Jones (a veteran of BBC Not-America’s Mi-5), wanders stolidly through the scenery like a hunky avatar lost in a Rockstar video game. Burned by an MIA Mrs., the dusty detective takes temporary solace in skimming riches off of bank robberies (after blowing holes in the robbers) and in the bed of Eva, a madam played by Franka Potente. (Potente, a dynamic actress, appears more confused in this sedentary role than she was back when Jason Bourne was hijacking her Mini Cooper.) He’s got friends in high places – Kyle Schmid isn’t nearly smarmy enough as the rich gadabout who had his life saved (and his leg amputated) by Corky during the war – but prefers life on the low, with his police pals. As the one-eyed Detective Maguire, Irish actor Kevin Ryan is the liveliest thing here. But the most interesting character by far is Matthew Freeman (Ato Essandoh), an African-American doctor forced to practice pathology in secret. Though some of his lines seem stripped from a lost episode of Downton Abbey: Special Victims Unit (“her vagina was bespoiled with semen”), the scenes of Freeman making like candlelight CSI – all putty, charcoal, and learned guesswork – while mobs rage outside and his worried wife sleeps upstairs are both haunting and fascinating, an exclamation point on an otherwise staid period piece.

Still, Freeman is both Copper’s most redeeming feature and evidence of its greatest flaw. Despite some glimmers of promise and the lingering hopes that there’s a magnetic Bill the Butcher  – or at least a Bill the Baker – lurking behind one of the dank doorways, the show left me suffering from Authenticity Fatigue. It’s not merely the cops-are-worse-than criminals card that we’ve seen before: it’s everything. Yes, Dr. Freeman is dignified and Eva is feisty, but after years of misfires like Magic City (and even masterpieces like Mad Men), it’d be nice to see minority and female actors given other notes to play. As prestige cable dramas have moved from their exciting, anything-is-possible Pulp Fiction phase to a more rote, 2 Days in the Valley–era torpor, historical backdrops have become a lazy shorthand for storytellers, an excuse to show us something cool rather than something compelling, and to pass off context as quality. Copper’s fetid New York City aspires to be a rich setting, but feels hollow, like a set. Lacking the filthy poetry of Deadwood, all we’re left with is the grime.