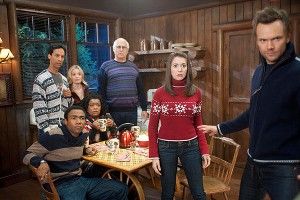 Unspeakable amounts of rain and wind damage weren’t the only thing dumped on America over the past two days: NBC also had some news to burn! On the heels of yesterday’s one-two punch of corporate crow-eating (Up All Night going multi-cam and The Office spinoff buying The Farm), Tuesday brought further details on the network’s second-half plans. The biggest takeaway for those likely to be reading television news on the Internet: Community is set to return — for realsies this time! — on February 7, thus restoring it to its rightful spot as the low-rated 8 p.m. anchor of a night of low-rated, critically adored comedies.

While the most rabid of Greendale Human Beings (as if there were any other kind) are likely still smarting from the Britta-like bait-and-switch pulled earlier in the month (Community was originally set to return on October 17), there is an upside to this extra delay. Not only will the show be back in its familiar time slot (30 Rock will have finished its shortened final season by then), the extra time off has likely made even the stoniest of hearts grow fonder toward replacement showrunners Moses Port and David Guarascio. After nine months without the show, obsessive fans (again: Are there any other type?) are desperate for a glimpse of Annie’s Boobs, even if they’re not quite the same as they used to be. (Speaking of which: Guess who is looking for work!?!) The downside is that the late start pretty much guarantees that there will be no “back nine” order, capping Community’s fourth season at 13 episodes. This brings the series total to an almost-syndication-worthy 84 and consigns the much-hoped-for final two seasons (and the movie) in the Dreamatorium, where they probably belong.

There was some other stuff announced, too: The Biggest Loser and soapy newcomer Deception are coming to Mondays between cycles of The Voice, and even bigger loser Smash is returning on Tuesdays at 10 p.m. Since Up All Night will be busy trying to drum up a live studio audience, unpromising presidential sitcom 1600 Penn will take its place on Thursdays, airing at 9:30 p.m., with Parks and Rec sliding back to 8:30. Adjust your Josh Gad tolerance levels accordingly.