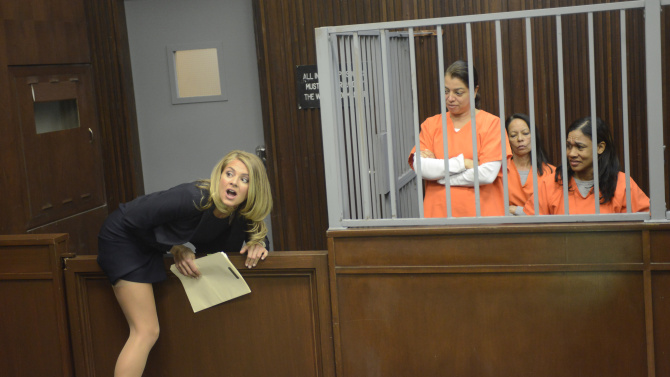 Let’s role-play for a second here: I’m a writer, and you’re my agent. Once you’ve validated my parking, I’ll pitch you on the premise of Benched and you’ll tell me what network might be interested. Ready? OK. Here it is: A high-achieving corporate attorney who, in a span of minutes, loses both her hotshot fiancé and her job in spectacular fashion — the former involves a hot millionaire, the latter concerns a priceless vase — is forced to reinvent herself as a lowly public defender. In her new life, she is surrounded by colorful characters and a roguish new love interest. The job changes her but she also changes the job. She wears high heels to help the downtrodden.

USA, right? It has to be USA. With its punny title and its high/low conceit, Benched would slot in quite nicely next to throwback popcorn fare like Suits and Royal Pains. And while Benched will indeed premiere on USA Tuesday night, there is a small wrinkle: Unlike nearly everything else on the network’s air, Benched is a half-hour comedy. And, judging by the first three episodes, that may be its biggest problem.

But first, the positives. In the role of fallen litigator Nina Whitley, Happy Endings MVP Eliza Coupe is terrific. With her machine-gun mouth and wobbling, praying mantis limbs, she’s the rare comic actor able to play the nervous and the breakdown. There’s a glorious moment in the pilot in which Nina, wearing a miniskirt to court that could double as a tourniquet, attempts to climb over a swinging wooden gate. By the time the judge (played by the wonderful Fred Melamed) enters, she’s straddling it like a pommel horse with only a well-placed manila folder preventing her from giving opposing counsel the full Basic Instinct. The radiant Coupe is only outshone when sharing the screen with comedian Maria Bamford, who is used all too sparingly as a sexually voracious attorney named Sheryl. If Coupe is a joke assassin, Bamford is a serial killer, straight-up murking every scene she’s in. If Benched could be reworked as a buddy comedy between these two, I’d be shouting about it from the rooftops. Or, barring that, from the far more effective platform of this very television review.

But, for now at least, Benched is kind of a mess. The writing is oddly clumsy, larded with repetitive pop culture references (two Harry Potters in two weeks!) and the sort of creaky “and by this I mean that” construction that hit its expiration date years ago. Worse, the show’s central idea — that Nina is now forced to deal with icky things like vending machines and minority clients — is a little too complicated to be mined for easy laughs. (There’s a moment of tepid behind-bars understanding in Episode 3 that plays like Orange Is the New Beige.) I can’t help but wonder if USA’s development executives — all of whom have been trying for years to expand into the sitcom business — simply don’t know what notes to give to a show like this. (And it’s telling that, a week before the Benched premiere, USA announced that it was now getting back out of the sitcom business.) Would Benched have worked better as a broad, hour-long dramedy? It’s hard not to think it would. Robbed of the extra half-hour of story and the vision needed to fill it, Benched too often scribbles in shorthand. When she’s not being Tased, Nina spouts on-the-nose self-analysis (“I’m broken!”) that would get her kicked off the big kid rides at Shondaland. And the non-Bamford supporting characters, such as they are, are razor thin, including a nice guy named Carlos (played by The Office’s Oscar Nuñez) and Boring Larry (Peter Spruyt), an easy nerd caricature phoned in from the ’90s.

It’s not as if Benched lacks good bones. In fact, the IMDb page reads like a coroner’s report for beloved, underappreciated sitcoms. The show was cocreated by the fantastic Michaela Watkins, better known as a performer on gone-too-soon Trophy Wife; the showrunner is John Enbom, late of Party Down; and that’s Better Off Ted’s Jay Harrington mugging as Phil, the aforementioned roguish beau. Together, the three made me laugh and, despite the show’s failings, had me eager to watch more. There’s plenty of time for Benched to find its legs. For now, though, Coupe remains a swizzle stick in desperate need of a better cocktail.