Carrie Secures an R Rating, Is Poised to Capture the True Horror of Adolescence 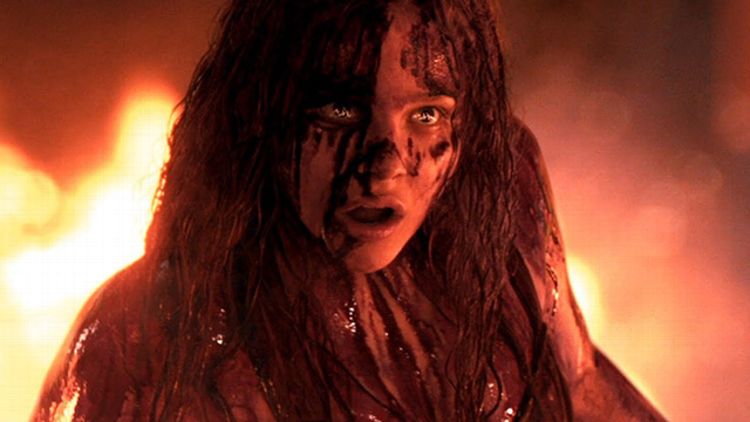 A new TV spot advertising the Carrie remake revealed that it’s earned an R rating for “bloody violence, disturbing images, language, and some sexual content,” which is a relief to anyone who lived through the snoozy made-for-TV movie adaptation in 2002.

Carrie should be rated R because adolescence is rated R. But because its titular star, Chloë Moretz, is a full decade younger than Sissy Spacek was when she starred in the 1976 Brian De Palma film, the first Stephen King novel to be turned into a feature, it certainly seemed possible that the newest version would be stamped with the certificate of unscariness, a PG-13 rating. The studio campaigned hard for that R, knowing the story’s already skeptical fan base all but demanded it.

Of course, underage viewers should see Carrie — how else would they be scared out of getting their periods? — and they will, sneakily. Plus, Moretz is a precocious and capable young actor: She was only 8 when she appeared in The Amityville Horror, and at 13 was prepared to do her own stunts for Kick-Ass. But her age, 16, dictates that any humid, sexy shower scenes deviate greatly from Spacek’s. This newest incarnation, written by Roberto Aguirre-Sacasa (Big Love, Glee) and directed by Kimberly Peirce (Boys Don’t Cry, Stop-Loss), promises to deliver its scandalous clips in the form of an epic final chapter that more closely aligns with King’s version of events (De Palma didn’t blow up any towns because of budget constraints) and that features more blood and — most frighteningly of all — Facebook.

Of course, there was blood in the original. The handy parents’ guide to the 1976 movie lists Carrie’s menstrual blood as the first reason for its 7/10 score for violence and gore. I always appreciated De Palma’s shower scene because it captured the dichotomy between other people’s teenage bodies and your own so well: Everybody else looks so good, and there you are, with your sad little ’70s equivalent of a tube of acne scrub beads, having a heavy flow day.

The benefit of having a twentysomething actor playing a girl who’s just waltzing over the puberty line is that the film can safely and limitlessly study that time in all of its graphic detail. Subtract the nudity, and the impact is just silly (and now we’re all going to laugh at you, NBC shower scene calamity). In thrusting Carrie into the tech age, however, Peirce has adapted this discomfort to reflect a new kind of anxiety: Mean girl Chris has her camera phone ready to record a locker room full of jerks throwing tampons at Carrie, which Chris later posts online. It’s a different sort of nudity, a type that’s less about seeing the boobs and more about knowing the boobs are out there awaiting Facebook tags. Even more horrible is thinking about Margaret White (Julianne Moore), Carrie’s religious fanatic mother, cooking up closet-prison punishments for social media transgressions #dirtypillows. As Judy Greer, who plays the gym teacher Miss Desjardin, told Moviefone, “Nudity just means something so different now than it did in 1976. I’m finding now that more and more nudity is so rarely important to the story in any film.” Being seen naked is almost retro; it’s being captured naked that really counts.

“Reputation” meant something different 40 years ago, when there was less tangible evidence of your high school identity that would creep around after you like an unwelcome shadow. As bound as I am to Sissy-Carrie, I have to admit that there’s something fresh to be said about how fucking terrifying it is to be a 16-year-old person today. Your body is scary enough; knowing that the idea of your body is an image that can be manipulated, copied, and dispersed against your will is a million times more frightening. Perhaps casting true to age makes that vulnerability even more visceral.

There is no better antidote for puberty than telekinesis, a tool that takes all of those exploding feelings a character has and channels them into the ability to flip over an RV. And [SPOILER!] Carrie’s is the most violent telekinesis of all. In fact, the more gallons of blood shed during prom, the better, because after watching the poor gal suffer through all sorts of misdeeds at home and school, the pleasure you get from her vengeance is a direct reflection of how good of an adaptation you’re watching — how effective it was at making you sympathize with Carrie.

Those who have read the novel undoubtedly imagine Carrie looking like the least flattering versions of themselves. She is the perfect character on whom to project your ugliest yearbook photo, and her plainness is part of the appeal. Spacek, then 25, auditioned with Vaseline in her hair, unbrushed teeth, and wearing a “dorkish” dress her mother had made in order to appear more like the Carrie we all imagined, but early casting rumors for Peirce’s film hinted that Lindsay Lohan was in consideration. Both Spacek and King were on board, which is surprising, as is the fact that there has never been a busted, hopelessly frumpled Carrie: Is there someone who looks more like a prom queen than Lohan, even in her most blitzed mug shot?

Despite the trailer’s best attempts, Moretz’s beauty can’t be erased with pale makeup and too much hair powder, but at least she’s had a full 10 years fewer than Lohan to stamp viewers’ minds with publicity shots. Adolescence always feels close at hand, like a recent past with a fresh sting, but updating Carrie means addressing a puberty that wouldn’t be imaginable to someone upward of 22. Some aspects of being an outsider never change, but the technicalities certainly do, and if you’re feeling optimistic you could say that it’s the perfect time to reconsider the White women. The previous Carries — Spacek and Angela Bettis, who starred in the TV movie — had time to reflect, as actors, on the experience of being a teen; Moretz has no such luxury, but that time comes at a premium now, and it seems somehow unrealistic to expect it in a movie about being a teenager in 2013. That alone is worth the R rating, even without the hundreds of buckets of blood.

Bryan Cranston Reads a Dirty Letter From a Fan Who Wants to Do Aaron Paul While He Watches, or Something