Cannes Interview: Alec Baldwin and James Toback on Seduced and Abandoned and Hustling in Hollywood 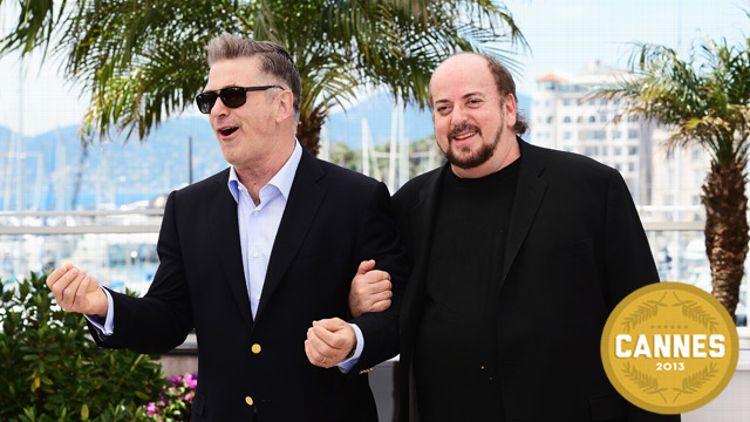 There’s a movie Alec Baldwin wants to remake, a 1974 biblical parable called The Savage Is Loose. The original was directed by George C. Scott (three years after winning Best Actor for Patton) and starred Scott and his real-life wife, Trish Van Devere, as a couple, the only survivors of a shipwreck, who spend two decades marooned on a desert island. Pregnant at the time of the crash, the wife gives birth to a son, who hits adolescence and promptly starts lusting after mom. Seated across from him on a private terrace at the Carlton Hotel in Cannes, James Toback — Baldwin’s friend and collaborator on the film Seduced and Abandoned, which documents the pair’s visit to the Festival in 2012 in search of financing for an erotic political thriller — admits he’s not only never seen The Savage Is Loose, he’s never heard of it. So Baldwin starts describing the movie, almost acting it out.

“In the opening sequence, they’ve erected a tower that they’ve built from wood. They’ve thatched it treehouse-style into the trees, it’s a box that they’ve filled with kindling that it’s probably taken them six months to collect. And Trish Van Devere sees a boat in the distance, and she goes running and climbs the vine ladder, and she strikes the flint, and she sets fire to the tower to signal to this ship where they are. And later on, you realize that she’s hallucinating, it’s a mirage, and she’s completely destroyed the entire system they had on a false image, and her husband looks at her — this is the opening of the movie — with this tremendous sympathy. She’s slipping away, she’s losing her mind!”

Baldwin’s been drinking jet-fuel espressos, which the Italian guy operating the espresso machine in the hospitality suite served to him with a warning: “Pay attention, this is like liquid cocaine.” Baldwin responded, “I like liquid cocaine,” and it seems to like him back: He’s in a terrific mood, buzzing with caffeine but also the evident thrill he gets from telling a great story. He even jokes about his own outburst-ridden past: After about the fourth time a handler interrupts him to present bottles of water and juice, Baldwin mock-threat whispers, “If we have another person serve us beverages, I think I’m going to flip this table over.” It’s totally charming! By the time he gets to The Savage Is Loose’s final shot (“… and then he walks off into the woods … to die”), I’m completely sold on the remake. I’m thinking that if I had millions of dollars, that pitch would have separated me from my riches.

I’m a much easier mark than the actual moneybags Baldwin and Toback pitch their would-be project to in Seduced and Abandoned, which premiered out of competition here and will air on HBO later in the year. Seduced and Abandoned is a lot of things: a surprisingly solid history of the Cannes Film Festival; a collection of interviews on commerce and craft with master filmmakers (Bertolucci, Polanski, Scorsese) and emerging stars (Gosling, Chastain); a reflection on the meaning of life in the face of approaching death from the perspective of two men aging into, as the 54-year-old Baldwin puts it, “the second-to-last reel of the movie.” But the backbone of the film is made up of the pitches Baldwin and Toback make to both noted financiers and random rich people, in hopes of securing a budget in the low eight figures for a film they’ve branded “Last Tango in Tikrit.” Baldwin would star as a Blackwater-style operative alongside Neve Campbell’s Lara Logan–like journalist, who meet in war-torn Iraq and realize, as Baldwin puts it, “The world is ending, so let’s fuck.” The last few summer movie seasons have proven that if anything sells better than sex, it’s apocalypse panic, but no one’s buying this mash-up; Baldwin and Toback are told repeatedly that they’ll land a significant budget only if they compromise on casting, dropping Campbell and/or bringing in younger, hotter talent to secure marketability. Various degrees of diplomacy are deployed to delineate the hard truth that while his seven-season stint as Jack Donaghy on 30 Rock has made Baldwin incredibly recognizable and beloved, it’s also essentially destroyed his market value as a movie star.

Baldwin has a lot to say about the state of his own career, and he doesn’t lay any blame at the feet of Tina Fey. “I think the options that I had in films had diminished a few years before I did TV,” Baldwin says. He notes that he and Toback, whom he first met on the set of Woody Allen’s 1990 film Alice, “share a sense, for various specific reasons, that there was a way we might have played it, so to speak, that would have strengthened and lengthened our careers in studio filmmaking.”

“Or life in general,” Toback quips.

“Maybe. But we both realized, you know, we made the choices we made, and did what we did, and I found all of that” — “that” being what Baldwin elsewhere in the conversation refers to as “movie careerism” — “in conflict with other things I wanted to do.” For one, Baldwin believes that his vocal political allegiances are incompatible with the politics of contemporary celebrity. “Everyone knows, the most successful film stars today, you know next to nothing about them. If they’re involved with charitable work, it’s Haitian relief, and diseased children — they’re not taking any positions that are going to offend any investment bankers.”

But Baldwin says he’s also had to question his own priorities and engagement. “Someone once said to me, ‘Would you rather live it in real life, or play it on screen?’ And I know many, many people who, the white whale for them is showing the world who they are on camera. They want to demonstrate to the world the depths of their intellect, or their soul, or their complexity, their passion. They want to put on film not only their younger or more beautiful self, but their more self-actualized self. And then they go home, and they want to put their feet up and watch the Knicks game. And I have crossed this line — and I’m not saying I’m better than them — but I realized recently, in the last few years, that I’m much more interested in my personal life being more satisfying. And if things were different workwise, and I had more options, that would be fine, but I wasn’t willing to trade for them.”

When it comes to options, one would think that Toback would have plenty of them. His last film, the Mike Tyson documentary Tyson, was maybe his most acclaimed directorial effort since his 1978 debut, Fingers. Its glowing reception capped a short wave of Toback canonization, spanning tributes such as The Outsider, a documentary devoted to Toback’s career from director Nicholas Jarecki, who went on to make Arbitrage, and a remake of Fingers by French auteur Jacques Audiard, who’d go on to make Rust and Bone and the Oscar-nominated A Prophet. And yet Seduced and Abandoned, a film about asking permission to make films, is the only project Toback has been able to get off the ground in the five years since Tyson premiered in Cannes to a lengthy standing ovation. (According to some sources, he has kept himself busy in the interim “discovering talent,” i.e., approaching beautiful women on the streets of New York and promising to make them into stars.) If anything, Toback says, Tyson’s success closed more doors than it opened.

“What happens is,” he explains, “because of the pigeon-brained pigeonholing, almost everyone in the movie world — certainly everyone with money, but I think it’s true also of other actors, and directors — they assume that what you can do is what you’ve just done. Certainly, your most recent success is the only thing you can do. So, what it did was, it opened up options, without being facetious about it, to do nonfiction films about aging black athletes.”

“Right! So, I got to a point where I became so resentful of people who were actually being flattering and nice that I actually felt churlish. I would cross the street [after a meeting] and think, ‘I really shouldn’t have handled that that way.’”

The conversation digresses elsewhere — touching on Russian literature, the demise of The Village Voice, Wayne Newton — and eventually Baldwin remembers that he only brought up The Savage Is Loose to make a point about what it feels like to be Alec Baldwin. “It is sometimes a sense that you’re shipwrecked. You’re there on the island, and the plane goes by, and, you know, Clooney’s on that plane, and Russell Crowe is on that plane, and you’re building a tower like George C. Scott in The Savage Is Loose … You are on this island, and you do what you need to survive, workwise, you make a living, you do this, you do that. And then one day you realize: You’re not getting off the island. That what’s best for your mental health, is not to fantasize about, ‘I wonder what everybody’s doing at the Maidstone Club right now. God, right about now I’d be having a lobster roll after having had my 18 holes of golf.’ You stop thinking anymore about your old life. I don’t think anymore ever — ever, ever, ever — about movies, and a movie career, and how I want to be a bigger movie star. I couldn’t give a shit about that, because it’s so unhealthy. And that’s what this business, for such a long time — I take that back. I robbed myself of such precious time in my life, worrying about what I wasn’t, and how am I going to get this back. How to make sure I didn’t lose something I already had, or how could I get my hands on something I didn’t have. And now, what I want to do is just have these experiences, and spend time with people I enjoy.”

Baldwin and Toback obviously enjoy each other’s company, but as Seduced and Abandoned makes plain, relationships don’t get movies made without money. Spoiler alert: Seduced and Abandoned ends without the concrete victory of a financing pact. Baldwin and Toback insist they’re still serious about making their Last Tango in Paris update for the Bush II era. In the year since their sojourn to the Cannes market, have they found the money?

“Good god, no,” Baldwin says. Toback laughs, and gestures at my notebook and recorder. “That’s why you’re here!”

Songs of the Week: Memorial Day Weekend Edition With Black Hippy, the xx, and Daft Punk From Japan