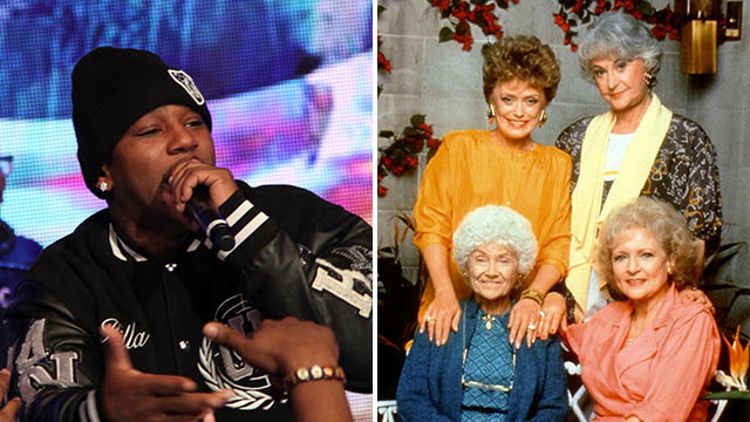 Yes, the day after the new Daft Punk album, Random Access Memories, is streaming in full on iTunes, I am writing about Cam’ron.

AND I COULDN’T BE MORE THRILLED.

Why? Because, for his latest single, Cam dipped back into his most hilarious, oddly-genius, career-spanning schtick: rapping over beautifully cheesy TV theme songs.

There’s something about the words coming out of his mouth, sometimes nonsensical, other times in the 99th percentile of vulgarity, always entertaining and full of confidence, that works perfectly with a wholesome ’80s sitcom theme.

The latest release: this past weekend’s “Golden Friends.” The sample inspiration: “Thank You for Being a Friend,” sung by Cynthia Fee, a.k.a. The Golden Girls theme song.

“Thank you for being a friend / travelled down the road and back again.”

“I wanna say thank you, to that co-cai-eee-na / that coke I got off the boat, that I made float, then copped that beemer.”

Mr. Giles has been at this playful, crass game for almost 15 years now. And each time it seems like it can’t get more ridiculous. But then it does. And then you smile and appreciate the few constants we have left in this world.

Cam’ron spends the majority of the video for “357” (his second career single) running away from the police. So the Magnum, P.I. inspiration as the sample seems moderately appropriate. I guess?

The original to “Horse and Carriage” is a classic, especially for those with the utmost respect for early Cam and Ma$e, but this remix is flawless. Between the addition of Silkk The Shocker, Charli Baltimore, Big Pun, and Wyclef Jean, hearing the phrase “Untertainment” multiple times, and those three familiar saxophone notes from the Night Court theme, there’s not much bad you can say about this.

Cam’ron and his boys, the Diplomats, have rapped over some of the most triumphant, fanfare-resembling beats ever. “Let Me Know” is certainly one of the finest examples, especially when coupled with the video, one that transitions from the beginning of the iconic Monday Night Football theme to this:

The Hill Street Blues theme is piano equivalent of walking into a well-lit doctor’s office with a courteous, calming receptionist. Surprisingly, that remains true, even when Cam’ron says:

Sell the information for a dime a white, that China China
I’m behind the diner, selling marijuana to a minor minor
Elder fella, lookin for that shine, Ill shine ya

Ignore what I said about “Harlem Streets” being the best. “Facts of Life” is unbeatable. I think? I don’t know anymore, I’m just so pleased that Cam’ron made theme songs his thing.

Cam’ron beginning the song with “It is a musical. Killa,” followed by Nell Carter’s warped voice is why America is the greatest nation on earth.

Not technically a “TV theme” in the traditional sense, but there are no rules in a world where Cam’ron talks about cocaine over a sitcom theme song about four old white ladies that now airs on Lifetime 17 times a day, so why not include this?

It’s the SportsCenter theme, so what’s Cam going to talk about?

The don of don play the dugout like Don Zimmer
I hang wit Steinbrenner just to get my cash turn
I call my car Jamal, it get Mashburn
Crashburn, rest in peace, Dale Earnhardt
My cousin died the same way, hit that turn hard

Top yourself, Cam. I dare you.

I be with Don King, if you a fighter, good
Fuck Tiger Woods, it’s tigers in the hood
So come test the birdie, if ya stretched the dirty
Give ya your quarter back like Testaverde

Ignore anything else I’ve said; this is the best Cam’ron-theme collaboration. I promise. Nothing beats that Testaverde line. (Except maybe that Facts of Life hook.)