Last night, the first proper trailer for Marvel Studios’ Ant-Man aired toward the end of ABC’s new “S.H.I.E.L.D. in the 1940s” series Agent Carter and, spoiler, guys: It was super boring. (The trailer, not the show, which is actually stylishly good fun.) I don’t know, I guess I was expecting a lot more of Paul Rudd shrinking down to a size that would allow him to straddle the thorax of an ant while also, in violation of all physical laws, maintaining the strength of a human male of normal height, and less Paul Rudd moping about while getting lectured by a Vandyke-wearing Michael Douglas hanging out in a classic comic-book-movie weirdo-man science bunker. You know, something more in keeping with the traditional “man in costume punches guys in the face” vibe of the leaked Comic-Con test footage from 2012. Oh well.

Before we pick apart the trailer, let’s run through some quick Ant-Man facts:

Paul Rudd plays Scott Lang, the second comics iteration of the Ant-Man character. Scott used to be a thief, but was stealing only because he needed to help support his gravely ill daughter, Cassie.1 It’s important that Rudd is playing Scott Lang because it allows the movie to sidestep the baggage of the original comic-book Ant-Man, Hank Pym, played by Douglas. Pym is mostly known for being bipolar and for abusing his wife and fellow Avenger, Janet “The Wasp” van Dyne, on, by my count, at least two occasions.2 Evangeline Lilly [falls into a 45-minute Kate-and-Sawyer fanfic Internet rabbit hole] plays Hope van Dyne, daughter of (I assume) Hank and Janet. Lilly almost quit Ant-Man after writer/director/driving force behind the entire project Edgar Wright left the production last May, but stayed on after seeing the new script (“I saw with my own eyes that Marvel had just pulled the script into their world”), and also probably because money is pretty awesome.

OK, let’s break this thing down. 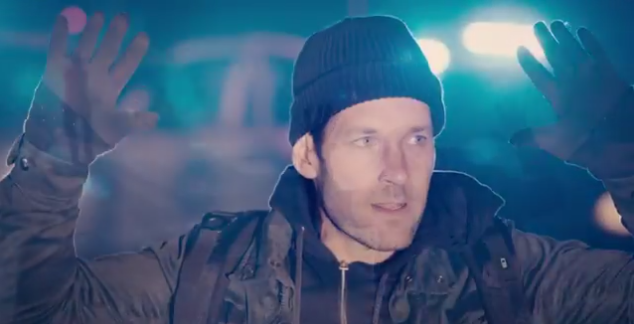 0:00-0:40 Under shots of Bay Area shipyards and Rudd’s Lang getting arrested dressed like a burglar, we hear the disembodied, weathered-velvet-and-cigarettes voice of Douglas’s Hank Pym, seasoned by the actor’s bout with cunnilingus-induced throat cancer, explaining that Pym has been watching Lang “for a while now,” which is creepy, let’s be honest. Pym is pitching Lang on something we suspect is related to becoming Ant-Man, because the movie is called Ant-Man. We see Pym’s stereotypical science-guy lair, and Pym — shot in sepia tones that signify “This is a flashback!” — working on something. What could it be? Ant-Man stuff? Meanwhile, there are no fewer than three shots of Paul Rudd looking doleful and pensive.

0:41-1:06 Nothing happens in these 25 seconds. Just people walking back and forth, a shot of Cassie in her hospital bed, and Corey Stoll in full bald-pated splendor, which means he’s probably the bad guy. 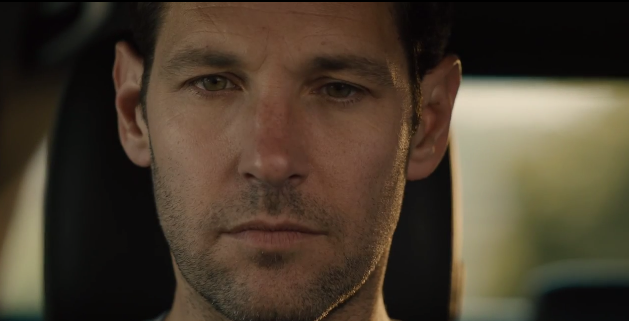 1:07-1:10 Scott Lang is still sad and perhaps contemplating the absurdity of life, but inside of a car this time, like Rust Cohle.

1:11-1:18 We see the Ant-Man costume! It looks pretty cool! Pym asks Lang to be (spoilerpoilerspoilerspoiler) Ant-Man.

1:19-1:56 OK, finally some action. Rudd’s Ant-Man shrinks down to ant size, it’s about time, God. Michael Peña appears, holding an assault rifle, and I realize for the first time that Michael Peña is in this movie. I wonder if I should’ve known that before, but I push that aside, because now here’s an ant, the beating of its wings3 kicking up a teeny-tiny cloud of dust. How cool this looks depends on your expectations; I actually think the CGI ant looks pretty cool. Quick cuts of people running from a building; guns firing; Ant-Man hurling a guy through a window; Hope van Dyne doing kickboxing; Stoll pounding angrily on the glass walls of what appears to be a meeting room. And then the climax: Ant-Man riding on a flying ant, perhaps inside of some kind of computer equipment. The Epic Trailer Climax™ music cuts, and Rudd delivers his “self-aware that this is a movie about a guy who rides ants” line — “One question: Is it too late to change the name?”