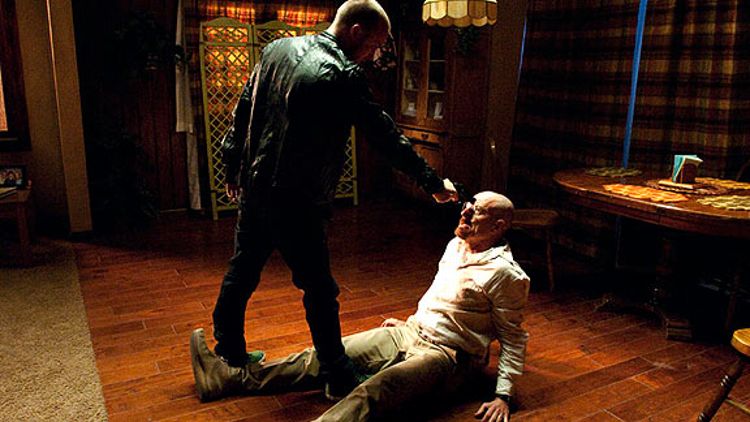 For devoted partners who’ve repeatedly risked their own lives to spare the other’s, Walter White and Jesse Pinkman don’t actually work together much. Or, really, communicate with one another other than to fight. Jesse still calls his old teacher Mr. White, and while that old habit now reads like a running joke, it’s more than a cute affectation; he does this to constantly remind himself of his subservient role in this so-called partnership, to give himself something to bristle against, as if he wasn’t already harboring enough resentment. While everyone speculates whether Vince Gilligan will end the series with Walt’s death, the moment Jesse utters that first name and truly feels respected as his mentor’s equal will be the moment Breaking Bad reaches its ultimate conclusion. It’s his Rosebud. So when Jesse storms out of Walt’s house to kill Gus and avenge Brock, and Walt — with the indentation of the .38 snub still visible on his forehead — says, “Let me help you,” that’s about as close as this show gets to triumph. They’ve destroyed the lives of everyone they remotely care about (not a terribly high number of people at that), so now their only recourse is to team up and assassinate the southwest’s reigning methamphetamine kingpin, likely escalating a cartel war and further endangering themselves and their families. Yay?

Now that Gus’ season-long attempts to play Walt and Jesse against one another have finally failed, Gus’ demise seems a foregone conclusion. Which is a shame, as he’s been a richer, more sympathetic character this season than Walt, and, with his still-to-be-filled-in backstory, more of a compelling protagonist. As if it wasn’t clear before that Walt was resigned to his doom, he flat-out says as much to Skyler in the intro, sending her and the kids off to protective custody at Hank’s without him. Skyler protests tearfully, Walt gets in a final dig at her, then he says good-bye to his family with an expression that bears at least as much relief as remorse and goes to sit alone by his shitty pool. (If we get to talk to Vince Gilligan again, our first question is probably gonna be, “How many takes did Bryan Cranston need to get the spinning gun to point to himself twice in a row?”)

The called-in threat only reinforces Hank’s suspicions about Gus Fring’s suspicious business holdings — why else would a paralyzed, off-duty DEA agent be a problem? Gomez reluctantly cons his way into the dry-cleaner for a look around, but doesn’t find any sort of, say, secret trap door leading to a giant underground meth superlab. Saul tells Jesse that it’s “end times,” hands him his cash from the safe, and bids him a not-that-fond farewell. Gus tries to convince Jesse that this search of Lavanderia Brillante has to be the final straw for Walt, to no avail. But when Andrea calls Jesse to say that Brock has been rushed to the hospital with a mysterious, sudden, and dramatically worsening fever, he notices the ricin cigarette is gone, does the math, and takes Walt-eliminating measures into his own hands. Walt pleads for his life — he would never hurt a child, but Gus has already proven he’s not above that, nor is he anything but relentless and creative in his efforts to drive a wedge between Walt and Jesse.

Jesse sits vigil in the hospital, even if he’s not welcome there, refusing to go with Tyrus to the lab for work. Gus himself meets Jesse in the hospital chapel, and when he realizes Jesse is aware that the illness is poison-related, he swings from stern to warmly paternal, offering Jesse the week off to see to Brock. Meanwhile, Walt is on the roof across from the hospital’s parking garage, ready to detonate a home-cooked bomb, but Gus senses — sniffs? Hears? Feels a disturbance in the Force? What is it with this guy? — that something’s amiss and goes back inside, leaving Walt, not for the first time, impotent and without a contingency plan.

Until next week, of course, which will presumably see its fair share of blood. At this point, the biggest question isn’t how the season finale will resolve so much as how Gilligan can mine yet another 16 episodes out of these guys being this close to the precipice.

The "Headlines" Video: Is Drake a Vampire?

Oscarmetrics: Can Rise of the Planet of the Apes' Andy Serkis Break the Oscar Mo-Cap Barrier?