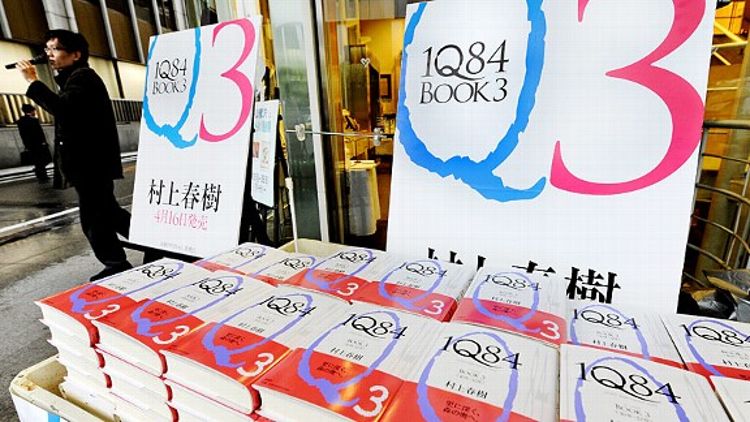 I used to own every single Haruki Murakami novel and short story collection in paperback. But when I went to my bookshelf a few weeks ago, I realized that I only had two left. The rest had been borrowed and never returned, which either says a lot about Murakami’s popularity or the kind of company kept by Murakami fans like myself.

But as much as I’ve enjoyed Murakami’s novels — some of them even multiple times — the relationship has always been ambiguous. Murakami’s widespread appeal is easy to understand but tough to pin down. His novels are intricate and ambiguous, yet extremely readable and never short on dry wit. Murakami’s characters inhabit strange realities and fascinating mental spaces. The covers designed by Chip Kidd certainly don’t hurt.

Yet the hangups in Murakami’s novels are obvious and more specific. His dialogue is blunt and declarative. Women always come in one of two shallow flavors: fragile and emotionally damaged or quirky and aloof. The narrator is all too often an isolated man who listens to jazz in his apartment, makes spaghetti, and uses his slightly larger-than-average penis (this detail shows up in several novels) to satisfy a lot of young women. In fanfic lingo, these kinds of characters are called Marty Stus — essentially an idealized version of the author himself.

The 944 pages of Murakami’s latest novel 1Q84 magnify his strengths and exacerbate his weaknesses.

Let’s start with the good: 1Q84’s Marty Stu is Tengo Kawana, a budding fiction writer who lives alone and often cooks himself a soft-boiled egg for breakfast. Murakami may write the same character over and over, but he does write him extremely well. Tengo is passive but relatable. His simple, solitary life becomes complicated after he is commissioned to ghostwrite a novella called Air Chrysalis, originally penned by a young girl named Fuka-Eri (quirky and aloof) connected to a mysterious cult called Sakigake.

Not surprisingly, it’s 1Q84’s female viewpoint character Aomame (fragile and emotionally damaged) that becomes problematic. Murakami has written from a first-person female, but never before at this length. Aomame is delicate, but certainly not weak. By day, she’s an assassin who specializes in killing unfaithful and abusive men by ramming a thin needle into the back of their skull. At night, she works off steam by sleeping with random dudes and complaining that her breasts are small and lopsided (“shaped like two lumps of dough that had failed to rise”). Murakami seems uncomfortable writing from the perspective of a woman. Though Tengo’s love-making is described in explicit detail, Aomame’s “sex feasts” are mentioned sheepishly in passing (“You wouldn’t believe it. It was like a porno movie,” recalls Aomame’s foursome partner).

Aomame exists as a feminist avenger, and yet Tengo spends the other half of the novel putting his slightly above-average member in every woman he meets (“Tengo was able to attract certain kinds of women — and very strongly at that”). One would think that the two would be incompatible, but events connected to Sakigake conspire to bring them together: it turns out they’re destined to fall in love.

But it’s a metaphysical kind of love. Tengo and Aomame have unknowingly stumbled into the alternate dimension of 1Q84 (the Q stands for question, the reference to Orwell kind of a throwaway). It’s unclear what’s different about 1Q84, aside from the two moons that hang symbolically in the sky. Tengo and Aomame know things are different, they just don’t understand why.

Murakami’s best novels explore the tensions between dreams and reality. Hard-Boiled Wonderland and the End of the World divided the conscious and subconscious mind into parallel story lines. Kafka on the Shore proposed that dreams could affect one’s behavior as much as any decision in the waking world. If 1Q84 is Murakami’s magnum opus, it achieves that by collapsing many of the author’s earlier ideas into an ambitiously imagined universe where reality is both internal and external, dictated by free will yet deterministic at the same time.

And yet, readers will be surprised how restrained 1Q84 is for such a mindfuck. There’s a rigid format to the book that alternates between Tengo and Aomame’s viewpoints, and the most surprising structural turn comes with the introduction of a third perspective in the last act. I’m not entirely convinced Murakami needed a thousand pages to frame a metaphysical love story. It’s worth comparing it to other thick books of recent memory: Jonathan Franzen’s Freedom deliberately overwhelms the reader with a decade’s worth of hypocrisies and ethical dilemmas crammed in every sentence; the late David Foster Wallace’s The Pale King illustrates the existential banality of the middle American workplace with chapters that are “stupefying dull”; another posthumous work, Roberto Bolano’s five-book 2666, repeatedly describes gruesome murders to point where readers are numbed to the violence. These novels are imperfect, messy, and have been praised rightfully for those reasons.

1Q84, on the other hand, shows an extraordinary amount of control over the course of a thousand pages. One finds the same kind of discipline and restraint in Murakami’s novels, but even his longer novels go off the rails toward the end (the third act of The Wind-Up Bird Chronicles comes to mind). In a 2004 interview in The Paris Review, Murakami describes his writing process as an extremely rigid daily routine: he wakes up at 4 a.m. every day and writes for five to six hours, exercises in the early afternoon, and then reads or listens to music before his 9 p.m. bed time. Murakami adds: “I keep to this routine every day without variation. The repetition itself becomes the important thing; it’s a form of mesmerism. I mesmerize myself to reach a deeper state of mind.”

Finishing a Murakami novel is like snapping out of a similar kind of mesmerization, like waking from a vivid dream: you don’t fully understand what you’ve experienced, but you’re left with a distinct feeling. I’m not sure I felt that with 1Q84.

In Japan, 1Q84 was released to incredible fanfare, selling out its entire first print run of a million copies in a month. (One of the characters references Czech composer Leos Janacek, causing a spike in sales of Janacek CDs as well.) 1Q84 is Murakami’s most satisfying work to date — it’s sometimes hilarious, other times moving — but it’s also his least resonant. After nearly a thousand pages, I’d never had a clearer idea of what Murakami was trying to say. But once I’d finished, it felt done, and I stopped thinking about it.

At one point, Fuka-Eri asks Tengo about his dreams. “I may be dreaming,” he says, “but I don’t remember my dreams after I wake up. I might have a lingering sensation that I was having a dream, but I can never remember what it was about.”

The best dreams linger, and the rest are forgotten.

About Dr Pepper Ten's Bold New Slogan: "Not For Women"