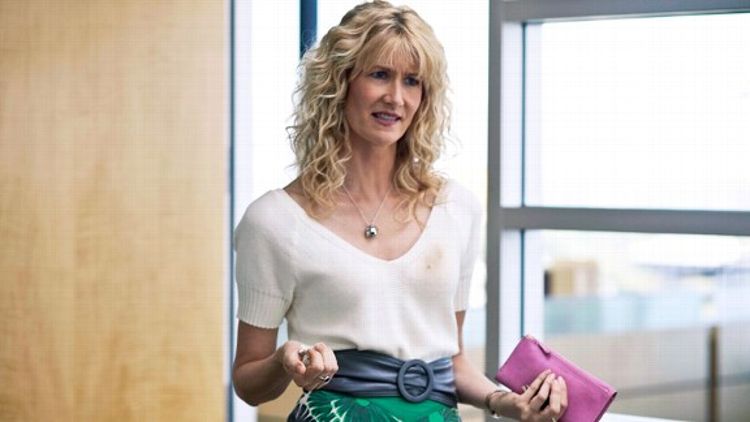 Ever been hazed at work? I hadn’t until yesterday when my editors suggested I live-blog the series premier of HBO’s Enlightened.

Things I knew about Enlightened before turning it on:

1. The show is called Enlightened
2. It’s on HBO
3. It stars Laura Dern
4. At some point, based on the NYC subway ads, she cries and her make-up runs down her face.

Based on these four facts, there’s no reason to believe this won’t be the start of another classic HBO series. I was eager to finally watch a show in real time instead of playing catch-up and watching 6 seasons between December 26th and New Years Day (Kwanzaa).

0:30: First scene = Laura Dern, weeping while sitting on the toilet.

1:22: Ladies in the office were talking about her. Something happened. LD starts storming through the office, very unclear why.

1:32: “I’m going to kill him”, sayeth Dern. “Him”, whoever you are, please watch out. It’s not even two minutes and I’m terrified of this woman.

2:39: She’s found “him” and is putting their affair on blast. Everybody is listening. This is stressful. I already don’t like this show.

3:11: Oh, what was that, Wikipedia? Laura Dern and Nic Cage used to date? Ha, of course they did.

3:12: I bet her other ex’s (Kyle MacLaughlin, Ben Harper, Jeff Goldblum, Billy Bob Thornton) are watching this episode, having terrible flashbacks to LD back in the day. On the other hand, I bet Nic couldn’t be prouder.

4:18: I feel like Greg Kinnear should be on this show. He’s definitely going to make a cameo at some point.

7:22: Enter, Diane Ladd, who plays mom on show and is LD’s mom in real life. I guess that’s cool? I really don’t know what to think right now.

9:15: She’s drinking a big gulp in her car right now. Nine minutes in and this is the only reasonable thing that’s happened so far.

First show recap attempt: She wigged out on guy at work who she slept with, because he got her transfered. Then she went to rehab. Finished rehab, drank a big gulp, and is now about to walk back in to old office to ask for job back.

9:31: Laura is walking through the office, and every woman in there is giving her serious side-eye. There’s really nothing worse than side-eye. Even beyond the whole birthing of a child thing and the whole monthly period thing and the whole just overall harder life thing, dealing with side-eye is the worst thing about being a woman. I wake up every morning thankful to be a man, because I put up with 95% less side-eye than the average woman.

10:36: First pausing of show (WHAT UP, HBO GO). Every sentence she’s saying is said like a question. I can’t take this. This is bad.

11:08: Second pausing of show. She’s talking and gesticulating in that hippie/”let me and my clipboard stop you on the street tell you about how composting that apple will send 8 Ugandan children to Dental school” manner. I want to fight her, but I can’t, because 1) she’s a lady and 2) she’s in the TV.

11:18: Third pausing of show. It’s like she’s simultaneously an organizer of #OccupyAppalachia and a member of the 1%. I don’t think I’ve ever been more puzzled by a television character.

Second show recap attempt: She went in to get job back. She pleaded her case like a crazy person. They said no. She threatened to sue. They said yes. Laura Dern is the 1%.

13:07: Her last name is Jellicoe. Amy Jellicoe. Not important, because I will continue to refer to her as different permutations of “The Dern.”

14:13: If I were a crazy white woman, this show would infuriate me. The Dern’s character is setting back crazy white ladies like one full week. It’s like “For the Love of Ray J” for me, except for me the setting back is 20 years.

15:22: Is reading mom letter she wrote in rehab. Mama Ladd goes, “How long is this going to take?” The Dern is now getting side-eye from her own mother. Mama Ladd’s attitude is singlehandedly saving this show.

Epiphany No. 1: For some reason, I think Laura Dern’s character is simply Laura Dern. I think Diane Ladd is playing herself too and actually hates her daughter for making her do this show. If this show gets cancelled by November, I think she’s going to flip out on the network, threaten to sue HBO, and then get sent to rehab. Is this a documentary from the future? If so, that’s CRAY.

18:57: LDeezy is headed to someone’s house. Where and for what reason, obviously they have failed to explain.

19:10: LUKE WILSON JUST ANSWERED THE DOOR. Is he about to save the day? That’s less believable than that time John Cusack outsmarted the apocolypse in 2012.

19:22: Wait, Luke Wilson is definitely playing himself too. Did they shoot this in one take? Is this a improv?

20:16: (Worst Quote in HBO History) The Dern to The Wilson: “I decided to get in the water and this sea turtle just passed by. This big, beautiful sea turtle. I felt its presence. It was God. Or it was better than God. Something was speaking to me. It was saying, ‘This is all for you. And everything is a gift. Even the horrible stuff.'”

What I’m doing right now: Fourth pause of show to look up my editor’s home address. Thinking of ways to get back at him for this assignment. Decided on sending him the 30 for 30 box set, but swapping out all the DVDs for this episode of Enlightened 30 times.

22:23: Dern and Wilson are back at his house. They are flirting. It has just become clear he is her ex-husband. It’s looking like they might get back together.

22:28: And just like that, Luke is doing lines on the coffee table.

22:41: Dern’s furious and storms out. This is definitely happening in real time. I wonder if Luke even knows he is on TV.

23:33: The Dern is in the car, nervously driving to the other guy’s house. She just left him the most stalkerish voicemail saying she was going to wait outside. Ben Harper, I feel your pain.

25:01: Guy comes out, tells the Dern off, calls her crazy, and tells her never to speak to him again. I’m never one to support a man verbally thrashing a woman, but this is the Dern we’re talking about. I support this 100%.

25:10: Backs up, then accidentally hits his car again.

26:41: Dern gets home and sees mom, asleep, with her rehab letters in her hand. The Dern seems happy, because she believes her mom does care, but has a hard time expressing it in person. In reality, I think Mama Ladd was about to burn them and fell asleep looking for matches.

27:30: The next morning. She’s getting ready for her first day of work.

27:36: (Second Best Highlight of the Show) They just started playing “Human of the Year” by Regina Spektor. I hope HBO paid her 10 million dollars for saving the end of this episode. I can’t imagine anyone else showing up for episode 2 if Regina had not come on. I love this woman.

Mike and Laura have just punk’d America, and as a victim of their rude ploy, I oddly respect their lack of regard for others. Is there even an episode two, guys? This was like a 29-minute deranged diary entry. I want everyone to watch this episode, because the miserable (me) love company (you). Even if there is another episode next week, I will be live-blogging about a different show. I promise. Sorry, the Dern, but fool me twice… shame on me.