Blood in the Water: Is Survivor’s Familicidal New Gimmick Really That Bad? 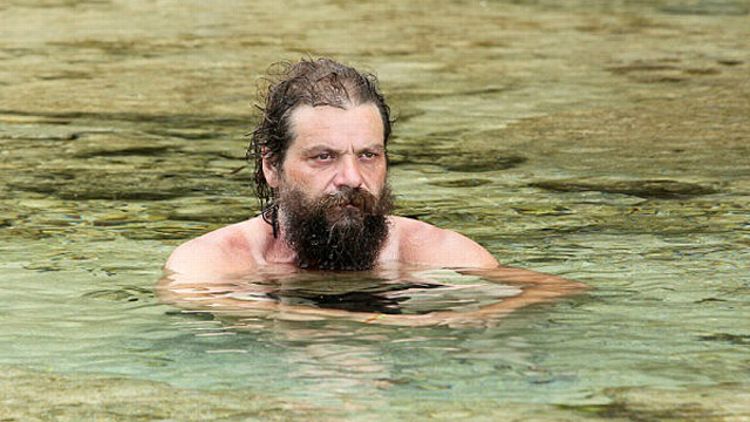 On the topic of this season of Survivor, subtitled Blood vs. Water, I have a two-point prologue after watching last night’s premiere. The first point is that Greg Buis, whom you may remember from Season 1 as the charming gentleman who was later robbed of the “Sexiest Male Contestant” award by inferior Colby Donaldson, passed on appearing this season. This is my main complaint. Oh, what could have been, Buis.

My second point is that the array of twists this season — pitting loved ones against the veteran players they assumed they’d be teamed with, a three-person Redemption Island with the option for players to swap out for their loved ones, and a “Day 0” during which the paired-up castaways were marooned in isolation — are great. Some Survivor purists have reacted negatively to the format tweaks, in particular the reappearance of Redemption Island, the thorn in the side of all Survivor fanatics, but I’m undeterred. Showrunner, producer, and host Jeff Probst is often saddled with the blame for Redemption Island and assaulted with charges that he’s assisting the show in its hurdle over the shark, but each season of Survivor is its own experiment, and if this season is a dismal failure — which I resist believing — it can always be rebuilt to resemble an early incarnation of itself.

There’s something baroque about this cast, which includes at least three memorable returning contestants: Rupert (growlier than ever, as if he expected his face to be edited out in post-production and replaced with an animated bear), Kat (who has brought along her boyfriend, Hayden, winner of Big Brother 12 and owner of an unnaturally white set of chompers), and Colton (previously established as evil). NFL star — and husband of One World’s Monica — Brad Culpepper is a standout among the rookies for better or worse, warranting plenty of screen time for his aggressive strategizing and enthusiasm for trying to use his hands to explain tribal mathematics or issue “Southern [hand]shakes.” He also proposed a five-guy alliance within the Tadhana (rookie) tribe, then corrected himself to explain that he meant, you know, “four guys and a gay guy.” That gay guy would be Colton’s fiancé, Caleb, who seems able to look past Colton’s wardrobe of pastel polo shirts, racism, and general horribleness and find a way to love him anyway. Returning player Aras has toted along his brother Vytas, who’s remarkable in his own right for being a teenage heroin addict who once robbed a lady at an ATM and served time for drug charges. The brothers are pitted against each other in a Burnett battle that gets into good brother/bad brother East of Eden territory — that’s my jam. Ciera, daughter of Laura (from Samoa, so don’t get her confused with the other Laura, Rupert’s wife), unpacks her emotional baggage as soon as she arrives in the Philippines, telling her fellow Tadhanas that she hid her first pregnancy from her mother when she was 17.

It felt like everyone cried in the premiere. John wept intermittently throughout the episode, gripped with regret for pussing out on trading places with his wife, Candice (Cook Islands, Heroes vs. Villains), when she was sent to Redemption Island, trying to stifle his sobs in his sleeve like sneezes that hit when you’re getting your fine dining on. Colton sobbed into his hankie (do they really allow hankies?) so hard that his tribe, Galang, gathered round to mother him as he blamed his gnarly actions last season on the scars of hometown homophobia. Rupert dampened his wife’s matching tie-dye. Kat just caught a sad breeze and had to wave at her eyes to dry them out. Then there’s the anger: Candice smashing a coconut with a machete, one blow for each castaway who voted her off to Redemption Island, where Rupert has made her his slave in the hopes that she’ll burn off all her energy fetching water while he snores in a shack; [SPOILER ALERT] Marissa (niece of returning member/shitty swimmer Gervase) giving a prime over-the-shoulder glare to her betrayers as she exits tribal council sans farewell; Colton and Kat already bitching at each other in a boat (and this happens before the return of evil Colton in the next episode — a preview promises this transformation, so help us all). Colton was removed from One World after a dramatic bacterial infection (first diagnosed as appendicitis), but it was hard to be sympathetic because he took the immunity idol with him as a “souvenir.” He’s the kind of villain who’s almost too awful to deserve an invitation back on the show — another message-board gripe — but it sure raises the stakes for tribal justice to sort him out.

The messy family dynamics in this season’s structure were played up in the premiere, but it’s a safe bet they’ll mature into a more authentic form of friction down the line. Culpepper admits he’d consider letting his wife’s team win a tarp against his, which makes the rest of the Tadhana tribe question his loyalty. Others seem really jazzed about creaming their kin: Marissa’s the first to bitch about dear uncle Gervase, and there are some ruthless mom-vs.-daughter puzzle smackdowns. Add to this the fact that the rookies of Tadhana, despite their inability to start a fire or solve a puzzle, are already showing some level of athletic superiority compared to the Galang all-stars, and it seems like the beginning of a promising spin on the Probst carousel. Having matched pairs competing against each other also opens up the possibility of misleading winner’s edits and narrative focus: Devoting so much tape to Culpepper in the premiere might be an early indicator that he’ll be sticking around for a while, or it might be that they’re beefing up his presence to make it more dramatic when Monica bids him good-bye and sails into the finals herself. Aras has won before, so obviously if it comes down to him and his ne’er-do-well brother, you’re going to have to root for the dude who assaulted that woman during her debit transaction. That’s Breaking Bad–level moral conflict for the audience! The merge is going to be a mess: All hankies will disintegrate when your alliance targets your daughter.

Are these thrills cheap? Do they straddle the infamous gray fin? I’d make the case, based on the first episode, that it might not be so. Maybe we don’t have the satisfaction of seeing the cast executed with finality as they are in seasons without Redemption Island, but that just means angrier family members slashing c-nuts with knives as they turn violently against their own moms; maybe we have to endure Colton again, but this time, hopefully, his peers will dole out the justice instead of malicious gut bacteria. O, ye of little hope. Fight on with your #noredemption hashtags and Probst hatred, stuck in your angry canoe between boxes of puzzle pieces and gently sloping net obstacles, or jump off the boat and live in your safe padded room of ever-sameness. If this is the beginning of the end, we may as well ride this baby off the cliff, right? Right.

Jennifer Aniston Is Pregnant, for Real This Time! ... and Other Familiar Tunes From This Week's Tabloids