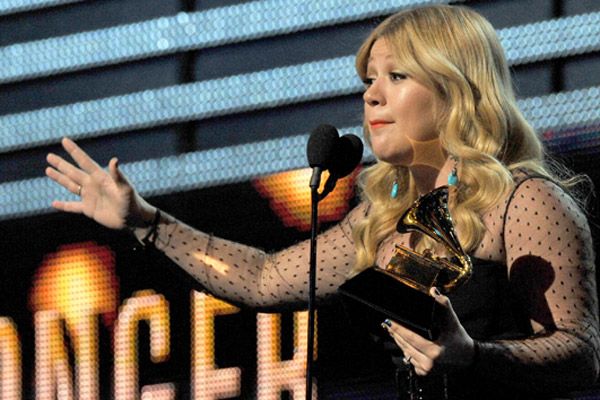 Only three men appear in the top 10 highest-ranking singles from American Idol winners, and one of them is Chris Brown. Despite a woman not winning over American Idol‘s voting audience of boy-crazy teen girls since Jordin Sparks in 2007, they’ve come out well on top when it comes to chart performance.

With the 12th season of American Idol finally at the voting stage, Billboard.com has presented the top 100 highest-charting singles from Idol contestants. Kelly Clarkson straight dominates the Top 10, notching six slots, including the top two: “Since U Been Gone” and “Stronger (What Doesn’t Kill You).” She’s also holding down the fourth and fifth slots (“Behind These Hazel Eyes” and “Breakaway”). The only non-Clarkson entry in the top five is Jordin Sparks and Chris Brown’s duet, “No Air,” just sitting there at no. 3, daring you to admit that it’s a good enough song to override the inherent squickiness of enjoying a Chris Brown song.

The only Idol-winning single in the Top 10 is the most recent, Phillip Phillips’s “Home,” at no. 6. He’s joined by Chris Daughtry, no. 10 for “It’s Not Over,” as the only male Idol contestants at the top of the list. Daughtry is also the only non-winner in the Top 10. (Rounding out the top of the list: Kelly’s “Because of You” and “My Life Would Suck Without You” at nos. 7 and 8, and Carrie Underwood’s “Before He Cheats” at no. 9.)

Other oddities/notables in the rest of the Top 100: