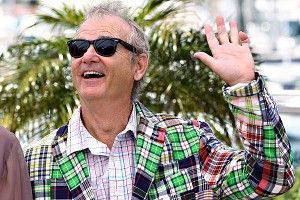 Intense scrutiny goes hand in hand with the casting of any iconic superhero, and yet a few years back, when the Fantastic Four film installed Chris Evans as Johnny Storm (the Human Torch), I don’t recall anyone complaining that Bill Murray didn’t get the gig. Granted, at the time Murray was well into his fifties, just a bit older than the character of Johnny Storm. But the man had experience!

Badass Digest has uncovered a hidden gem on Murray’s CV: In 1975, a pre-SNL Murray played Johnny Storm in a Fantastic Four radio series, which Stan Lee (who created the characters) narrated himself. It’s not the most intuitive casting ever — even as a younger man, Murray’s distinctive deadpan is in place, and it’s not entirely appropriate for a comic book character who fights crime by setting himself on fire — but then, comic book characters and the kinds of situations they tend to get into are sort of a weird choice for an audio-only adaptation, so why not cast a guy who sounds less like a vigorous superhero than a lazy orange cat?