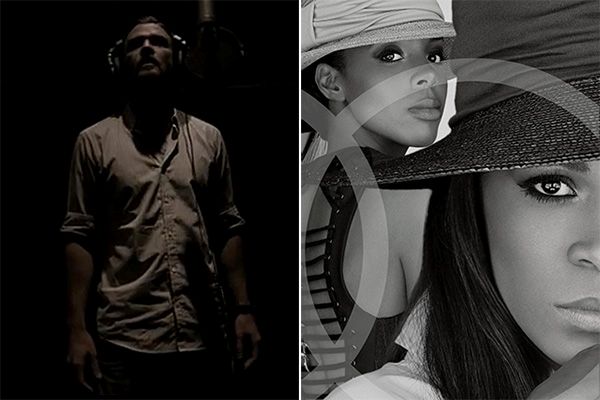 What a day, what a day! In the span of a few short hours, we’ve gotten promises of new music from not one but two of our nation’s leading lights: the unstoppable Mrs. Beyoncé Jiggaman Knowles, and the beautiful mysterious unicorn that is Justin Timberlake The Musician Not The Actor.

Beyoncé, helpfully, is being way more upfront about the whole thing. In her new cover interview with GQ — yes, the one for which she took this photo that you’ve already had tattooed to the back of your eyelids — Bey says she’s going to drop a new album at some point this year (April at the earliest), for which she’ll also tour. As for what that might sound like:

I’ve been working with Pharrell and Timbaland and Justin Timberlake and [The] Dream. We all started in the ’90s, when R&B was the most important genre, and we all kind of want that back: the feeling that music gave us … Mostly R&B. I always have my Prince and rock/soul influences. There’s a bit of D’Angelo, some ’60s doo-wop. And Aretha and Diana Ross.

As for her previously announced Super Bowl halftime gig, trust that it will be executed with all the precision and exactitude of the Navy Seals that took down OBL:

So when she’s on tour, every night she heads back to her hotel room with a DVD of the show she’s just performed. Before going to sleep, she watches that show, critiquing herself, her dancers, her cameramen. The next morning, everyone receives pages of notes … “One of the reasons I connect to the Super Bowl is that I approach my shows like an athlete … You know how they sit down and watch whoever they’re going to play and study themselves? That’s how I treat this. I watch my performances, and I wish I could just enjoy them, but I see the light that was late. I see, ‘Oh God, that hair did not work.’ Or ‘I should never do that again.’ I try to perfect myself. I want to grow, and I’m always eager for new information.”

And that’s not all. Beyoncé has also deemed it time to awaken the slumbering beast that is Destiny’s Child: “We are so proud to announce the first original Destiny’s Child music in eight years!” shouts the group’s Facebook page. OK, so it’s for just one new track — “Nuclear,” produced by Pharrell — that’ll be tagged onto a best-of called Love Songs. But still: That Beyoncé must get up pretty early in the morning!

As for JT? The picture’s not as clear. Rumors started swirling yesterday that Timberlake was getting back into the game, with Florida’s Radio Now 97.9 — basically, when it comes to reporting credibility, the Wall Street Journal of local Jacksonville pop radio — announcing that he was gonna drop a new song, all straight up out of the blue like that. Meanwhile, Billboard reported that Timberlake had been secretly working with Timbaland on a new album, and that the pair had 20 tracks already in the can. Then Justin tweeted “Thursday, January 10th, 2013 at 9:01 am PST,” and everyone was like [air horn] [air horn] [air horn].

But not so fast. When the aforementioned time did come, all we got was … some talking and a countdown clock?!

First, the video below, which popped up on Timberlake’s site at noon EST. There’s no singing, but there is JT getting all dramatic about the respect he has for his instrument and his craft: “I’m the one who sits and is obsessive about it before you even get to hear it … as close as I get to it, I don’t know that I can physically torture myself year in and year out … You just don’t get that every day. You have to wait for it.” But about movies? “Ah, movies? I just crap those out whenever I feel like it,” Timberlake does not add.

And then, this countdown clock, which promises that in roughly three and a half days … something is … maybe … going to happen. Considering how he’s slow-rolled us so far, there’s no reason to think it’ll be new music just yet: More likely, Timberlake will officially announce the project, maybe break us off with a snippet or a track list or some other ire-inducing marginalia. Considering how long he’s waited to get back on the mic, a long and judiciously curated teasing-out process is not only understandable but probably called for.

And then again — how dope would it have been if he had just dropped an album on us out of nowhere? With all due respect to Timberlake’s “I have to wait for the magic!” stance, I believe there are two Hollywood developments that, were they to have come to fruition, would’ve seen him make a hasty return to music: (1) If he’d had an out-of-the-box blockbuster smash, instantly cementing himself as a box office draw. As charming and winning as Friends With Benefits was, that doesn’t quite count; (2) If he’d copped an Oscar. (Getting nominated would’ve probably done the trick, too.)

In both cases, he’d have proved his acting bona fides beyond a shadow of a doubt, and could’ve slinked back to music all like, Oh yeah I’m a genius at this, too. No cryptic announcements, no countdown clocks: just tunes, offered ungarnished-of-hype and devoured voraciously. That would’ve been some don shit.

But Justin Timberlake is not an A-lister, nor an Oscar nominee. He’s a serviceable young actor. And so now that the inevitable has occurred and he’s returning to music, you can’t be surprised he’s going to be squeezing the juice on it just a bit.