Being Robin Wright: ‘The Congress’ Scans an Actress Into the Hollywood Matrix 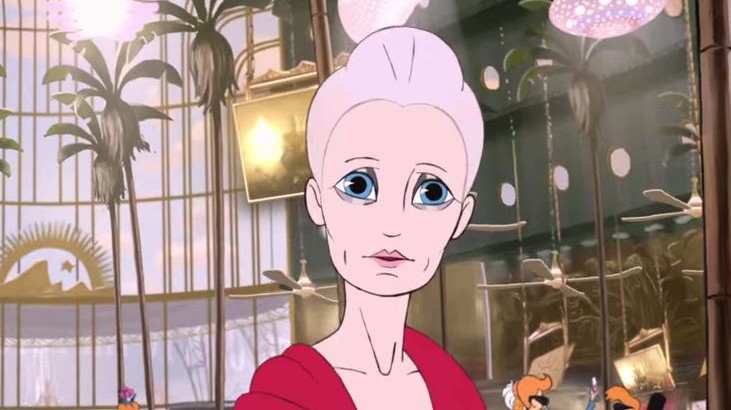 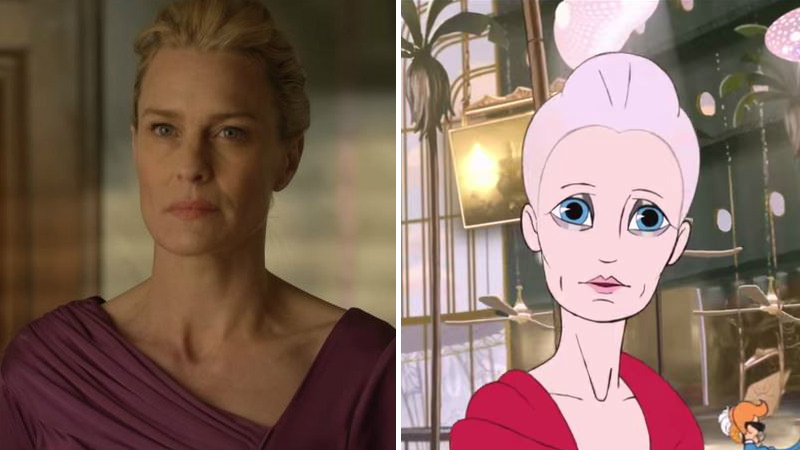 The Congress has enough on its mind that you can almost forgive it for being a little scattered. Even in its clumsiest moments, you can feel director Ari Folman (Waltz With Bashir) trying to invent a vocabulary — visual, moral, metaphorical — to discuss things we’re not quite sure how to worry about yet. The script doesn’t so much adapt Stanislaw Lem’s 1971 sci-fi novel The Futurological Congress as lease space inside it. Robin Wright stars as “Robin Wright,” an acclaimed actor who in the movie’s alternate reality has burned all of her professional bridges through erratic behavior. (If there’s a House of Cards in this universe, it stars Julianne Moore.) An executive from “Miramount Pictures” (Danny Huston) offers to buy exclusive rights to her image and persona in perpetuity, planning to turn her into an endlessly exploitable CGI character. The catch: If she takes the deal, the real Wright can never work in this or any town again, ever. It’s her last chance, Huston warns her — she’s not getting any younger, and neither is the movie business. “Pretty soon this whole structure will stop existing,” Huston avows, meaning the studio system that for decades has nurtured and indulged and covered for troubled actors, burying their scandals and cleaning up their messes. Wright signs. Twenty years later, as the living ghost of her omnipresent digital self, she makes a personal appearance at a convention of futurists in a studio-controlled police state called Abrahama, a J.G. Ballard Toontown accessible via phantom tollbooth. Huston reappears as a living Hirschfeld caricature, pushing Wright to sign a contract extension authorizing the sale of “Robin Wright” as a chemical formula so fans can consume her as an omelette or a crème brûlée. Movies, he tells her, are “old news — revenants of the last millennium”; now transubstantiation is where it’s at. At this point Wright begins to break down, taking the movie with her.

The plot is Cool World drizzled with a Charlie Kaufman reduction; the non-animated sequences involving Wright’s agent (Harvey Keitel) and her odd fictional kids play like the first act of a hypothetical Synecdoche L.A. “You could play both sides,” says Wright’s caustic teen daughter, played by Sami Gayle. “Nazi and victim. You’re multipurpose for a Holocaust flick … You could even play a collaborator if they needed one. How many actresses have that kind of talent these days?” Like Being John Malkovich, it’s hard to imagine this movie being built around another star. How many actors could play Claire Underwood and poor martyred-by-history Jenny in Forrest Gump, Moll Flanders and Queen Wealthow in a CGI Beowulf? The movie plays with everything we assume we know about Wright from her screen presence — and her screen absences. Over the years, as if safeguarding a bubble of privacy and autonomy that bigger movie stars don’t get to hold on to, Wright reportedly turned down everything from Armageddon to Batman Forever to Dirty Dancing; The Congress imagines the industry using technology to violate that bubble, creating a version of Wright who belongs to the world. In the animated future, her avatar speaks in a goofy Texas drawl and stars as a whip-wielding superheroine in a CGI adventure called Rebel Robot Robin, riding a bomb marked BADASS into its drop zone like Slim Pickens in Dr. Strangelove. (Later, Wright and Jon Hamm — playing the smitten former head computer-jock of the “Robin Wright Department” at Miramount, a man who’s fallen for her after years staring at her image — consummate their virtual fling in the ashes of a crashed jetliner.)

This is a Hollywood satire that reserves its deepest sympathy for stars, a collaborator’s cocktail of loyalties if there ever was one. It imagines the movies being superseded by new forms of fantasy so immersive and compelling that we’ll willingly surrender our ability to perceive anything else, like Joe Pantoliano choosing the fake steak in The Matrix, but the various dream-worlds it shows us — including a crumbling future New York where lotus-eating consumers dream full time as Ron Jeremy or Cleopatra — are too sketchy to seem seductive. It postulates the end of cinema as the beginning of the end of the world, but nothing in the trippy second act or the apocalyptic third one feels as rich or strange as the moment early on when Wright stops in front of a Princess Bride poster, regarding her younger self with a mix of longing and pity, as if she’s not sure which of them is less real.

The Week in Gossip: Is Love Dead? Getting to the Bottom of the Carter-Knowles Divorce Rumors