‘Beast’ Mode: The Return of Greg Dulli and the Afghan Whigs 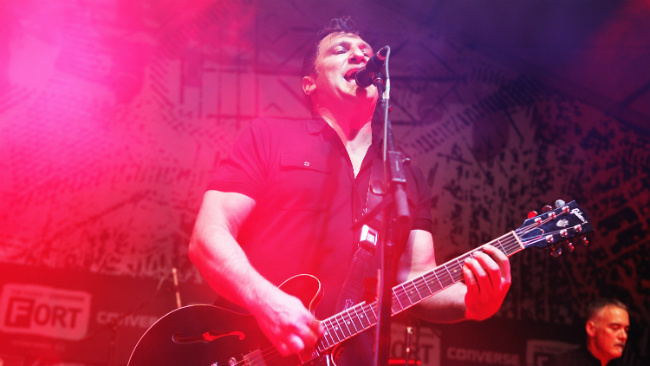 Millions in the Los Angeles area were woken up by a 4.4 earthquake before the dawn of March 18. Greg Dulli was not one of them. This is in a figurative sense; the Cincinnati-born Afghan Whigs front man has lived in L.A. for about 25 years, and one of the first points he makes during our phone conversation that day is he doesn’t consider the earthquake to be “anywhere near the top 10” he’s endured. But even if it were, it wouldn’t have served as an unfortunate alarm clock. The 48-year-old was already up at 6:30 a.m.

This fact hits with thudding disappointment — this isn’t the Greg Dulli who served as a spiritual guide during the most emotionally, romantically, and physically self-destructive times of my life (last semester of college, naturally). He should be passed out at that hour, unless he’s reliving the lyrics from “Omerta”: “as for sleep / no comprende.” When I mentioned this interview to two music biz types who knew Dulli in the ’90s, one’s response was “I hear he’s doing well,” the kind of sympathetic and somewhat condescending tone given toward recidivist criminals or addicts. Another put it more bluntly: “I’m surprised he’s made it this far.”

I guess that’s the narrative with Do to the Beast, the Afghan Whigs’ first album in 16 years, released today. Dulli’s done a lot of living in the public eye since 1999’s scorching hot, funk-rock classic 1965 closed out the best three-album run of the ’90s that came from someone other than Outkast. If you wanted to hear Dulli’s tarred and leathered vocals in the 2000s, he’s given you many opportunities. The Twilight Singers started as a side project in 1997, and in 2000, he released Twilight, which toned down the Whigs’ wanton carnality for something closer to “makeout music” — its high thread-count weave of quiet storm R&B and trip-hop has held up extremely well. However, 2003’s equally impressive Blackberry Belle shifted toward a gothic, guitar-based grandeur, and by 2011’s Dynamite Steps, the Twilight Singers more or less sounded like a slightly grottier, more electronic Afghan Whigs. But this is the Afghan Whigs, and so his established persona is still every bit as potent as it was during the ’90s.

While grunge and alt-rock had sex symbols, they weren’t all that concerned with sex — Gavin Rossdale was too pretty, Eddie Vedder too earnest, and no matter how much Chris Cornell sang about snakes, Soundgarden was basically Led Zeppelin without all the lemon squeezin’ and custard pie. Meanwhile, the Afghan Whigs’ Gentlemen stands as one of the most blazing, self-immolative breakup albums of all time. Its follow-up, Black Love, spoke of carnal knowledge crazy enough to kill for — in 1996, a Guitar World interview with Dulli suggested it was loosely based on the O.J. killings. I’ve been waiting literally 18 years to ask him about it and when I bring it up, he flatly states it’s one of the dumber things he’s ever heard. And then there was 1965, recorded in New Orleans with Dulli under some kind of voodoo that made him want to fuck everything in sight without much remorse. I’ll leave it at this: when the Afghan Whigs announced their comeback, an inordinate percentage of the excitement seemed to come from women.

But Dulli has no interest in playing the aging, Grinderman-esque letch, and the Afghan Whigs aren’t trying to revive themselves as true maximum R&B in a time of unrepentant wimpiness. The latter’s even more of a surprise considering their triumphant reunion tour in 2012, when the band would interpolate Frank Ocean, Drake (“Over My Dead Body”), and Kendrick Lamar (“Swimming Pools (Drank)”) — Dulli’s voice sounded great during those shows, which he attributes to having quit smoking.

And Do to the Beast itself is almost entirely due to Usher. The two collaborated at SXSW in 2013 to perform “Climax” among other songs, and as much as I’d like to believe it was only after The Voice’s host demanded to work with the guys who wrote “Fountain and Fairfax,” it was hooked up by a mutual friend, Andy Cohn of FADER. It was in the midst of that show in Austin, Dulli says, that he and bassist John Curley could sense that Do to the Beast needed to happen. Of course, that didn’t include original guitarist Rick McCollum; Dulli tells me McCollum’s a guy who “gets in his own way,” in a kind of “takes one to know one” tone. Still, the lack of his slashing leads and slide guitar is noticeable on Do to the Beast.

But even if the Afghan Whigs have dropped the wah-wah guitars and jive talkin’, it’s still undeniable Dulli: His howling on “Parked Outside” and “Algiers” is some of the rawest he’s ever put to tape; “I Am Fire” stomps to a rhythm similar to Kanye West’s “Amazing”; and there’s “Trampled Under Foot”–style funk-rock seizures in “Matamoros,” which takes its name from a Mexican border town supposedly haunted by ghosts. In the most recent episode of Justified, it’s the exact place where the Crowes and Boyd Crowder ran into trouble with the federales while transporting a truck full of heroin — Dulli’s a fan of the show, unsurprisingly. If there were ever such as a thing as an older, wiser Afghan Whigs, it’s Do to the Beast. Which isn’t to say it’s tamed or domesticated; the difference is just that it doesn’t sound like Dulli is putting himself through psychosexual stunt work.

Because the gist of talking to Dulli these days is he’s not that guy anymore — he says Sun Kil Moon’s Benji is the last record he was truly moved by — I feel somewhat guilty by the gulf in his enthusiasm between talking about R&B records and talking about baseball. Dulli’s a Dodgers season-ticket holder, but his allegiances are quite clearly delineated: “The Dodgers are my friends, the Reds are my family.” He explains his initiation into hard-core Reds fandom; as a youth, he met broadcaster Joe Nuxhall, who predicted a World Series victory for the Big Red Machine. (Granted, this was 1975 and the Reds won the division by 20 games, so I don’t know how Nuxhall could be considered a visionary on that one.) But Dulli’s a co-owner of the Short Stop, an Echo Park bar that used to be known as a watering hole for cops and has become more or less a Dodger Stadium satellite campus. I suppose it’s for the best that he doesn’t want to revive those days, even if some fans want the exact opposite — during their Coachella set from this past weekend, a searing version of “Algiers” somehow inspired a shirtless bro to interject, “PLAY GENTLEMEN, THIS SHIT SUCKS!” But I don’t think it bothered Dulli, considering the lived-in confidence of Do to the Beast: There’s being the “old guy in the club” and the Dulli of 2014, the guy who owns the club.