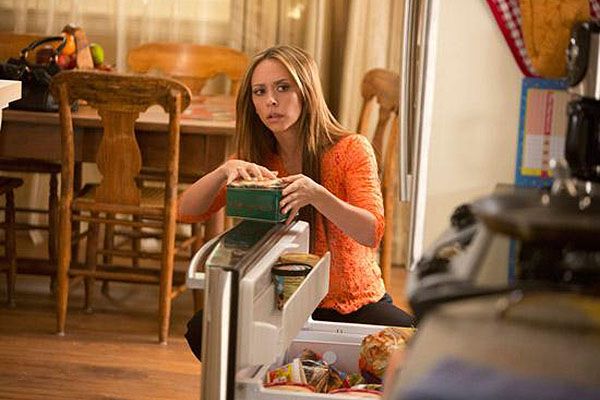 Some TV shows get a bad rap. When critics, writers, and other smart people say a show is awful, most heed their word and hiss as it airs bearing its metaphorical scarlet ‘A.’ But are these shows really as terrible as the culturati make them out to be? Are they all that bad, or is their perception as being horrible overblown? Awfulness Check binges on the allegedly offending show, considers the primary criticisms, and renders a verdict.

The Client List. Airs Sunday at 10 p.m. on Lifetime.

Jennifer Love Hewitt stars as Riley Parks, a good ol’ Texas girl whose husband runs out on her and her kids. Luckily, Riley bumps into an old friend who suggests applying to the massage parlor in nearby Sugarland, where she’s making sweet cash rubbing people down.

Except poor, naive, busty Riley (the costume department deserves some kind of special Emmy for how shamelessly they showcase Hewitt’s breasts) doesn’t quite make the bluntly obvious connection. She’s shocked a massage parlor called the Rub makes a nice kit and caboodle by offering its clients “extras.” No way, she insists, will she ever stoop so low.

But when you’re the single breadwinner who drives a gas-guzzler and has two precocious TV children, sometimes you have to swallow your pride and do things Nancy Botwin/Weeds–style: namely, throw out any good sense to downsize and go for the quick big bucks to keep up. “They already lost their daddy. I can’t take away their home, too!” Riley cries to her mother, played by Cybill Shepherd. (I know!)

So Riley starts putting in a little extra effort with her massage clients — a firm, steady hand, if you will. And it works! The tips start rolling in, possibly proportional to the amount of effort she puts into her skimpy outfits. The sagely proprietor-cum-madam played by Loretta Devine even bumps her up to a manager role, and Riley becomes invested in the Rub and her fellow masseuses.

Hewitt, she of the teary Party of Five meltdowns and (actually awful) Ghost Whisperer, is plucky, positive, and knows how to act within her very specific … limits. Season 2 has shifted ownership of the spa to Riley, giving Hewitt more occasions to invoke her version of Mary-Louise Parker’s steely-eyed huffiness. Her hair extensions are a billowy, distracting mess, but we can blame that on the lighting.

The show, which just kicked off its second season in March, and is based on the 2010 original movie of the same name, comes as part of a rebranding for Lifetime, with a campaign that touts The Client List as the forerunner for its new, racier identity. And while the show’s concept is certainly edgier than the network’s flagship scripted series, Army Wives (though you could count that show’s recent casting of early aughts pop star Ashanti as risky), it is glowingly basic-cable in its sexless portrayal of sex: It’s all curled toes and quivering bare male chests, Hewitt in plunging necklines and push-up bras.

The plot is flimsy and unrealistic, but realism in television is overrated, and we don’t watch Lifetime for anything but softly lit camp. But campiness, done right, is self-aware, totally forthright, and unflinching. The best camp doesn’t give a damn and is glad to tell you so — Nahnatchka Khan’s Don’t Trust the Bitch in Apartment 23 was, until ABC canned it, TV’s brightest, bitchiest example. Most importantly, good camp is fun. The Client List is not campy; it is corny. Fun and corniness are not mutually exclusive, but they have a parasitic relationship: More often, corniness makes something fun; camp is purely, inherently fun.

So as a way to evince the show’s already staggering virtuousness (it’s all for the kids! It’s all for the family!) and sidestep its basic cable trappings, not only does Riley give a good handie, she’s also a really good listener. Dressed in lace and with her hair in messy pigtails, Hewitt will get you off and be your therapist, all in an hour. Almost every scene is punctuated with a waxing rhapsody or positive affirmation. It’s like downing a shot of pure saccharine every three or four minutes. No wonder cynical Mad Men and Girls fans don’t want anything to do with The Client List — it’s more earnest than a Taylor Swift song.

Corniness in a vacuum like this doesn’t do anyone any good, and is tantamount to awfulness. But where The Client List stumbles into somewhat redeeming, perceptive qualities is in the nebulous lowbrow art matrix. (The New Yorker’s TV critic Emily Nussbaum wisely opined on Twitter recently, while discussing the shows Raising Hope and The Middle, that there’s a wrongheaded notion that just because a show is about poorer people, it’s “lowbrow.”) And while The Client List is not highbrow by any means, its devotion to working-class families and individuals is interesting and maybe even worthy of closer criticism. All of the adults in the cast have jobs where they work with their hands: masseuse, hair stylist, construction worker. Money, finances, debt, and finding ways to make ends meet are central discussions and plot movements, and often in a way that’s relatable — it’s not so much about what you can and cannot afford on a limited income, but rather the surprise, expensive hurdles that end up being the most affecting.

Riley is dogged by her family’s mountain of debt, and every time she thinks she’s about to get out from under the financial pressure, something bungles it: She has to come up with money to bail her husband out of jail, the spa needs to hire new employees, her car needs repairs, her kids are having a fund-raiser at school. That the show leavens its topical undercurrents with gooey hokum is unfortunate and frustrating, but it doesn’t make it bad. It’s just not very good.

If we live in a world where corniness equals awfulness, then I don’t want to watch TV in that world. NOT AWFUL.

Aleksander Chan (@aleksnotalex) is a writer living in Austin.

Do You Like Prince Movies? Podcast: Room 237, Twilight Zone, and More With Guest Chuck Klosterman