Avoid All Humans and Internet Websites, Because April Fools’ Day Is the Worst Day Ever 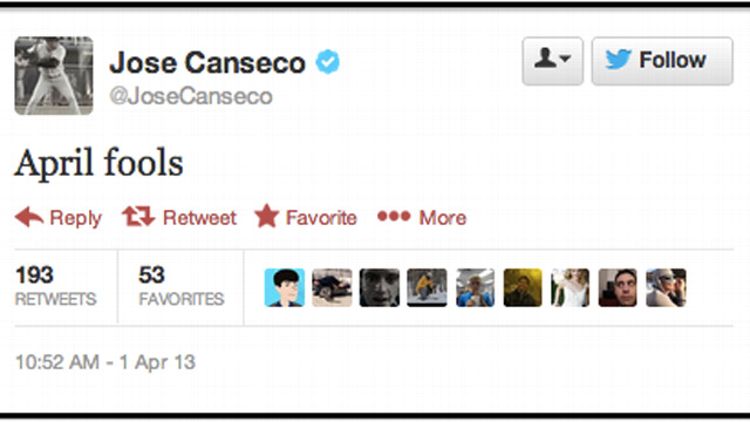 For some of us, April Fools’ Day is the worst day on the calendar.

By “us,” I mean the type that could be described as “gullible.” Those who, I don’t know, “tend to trust their fellow man.” A certain lot that “often assumes bad things will happen to them at every turn, so when you tell them bad things just happened, even on April 1, they will believe you.” That “us.”

And making it worse, the people who enjoy April Fools’ Day know who “we” are. It’s no secret. There’s a directory/listserv/message board community dedicated to our names, phone numbers, blood types, addresses, and locations for the 24-hour period of terror. Bad times.

The traps are everywhere, with each passing year proving more difficult to determine what’s real and what’s prank. If I had mastered the art of avoiding them all, I’d certainly enlighten the vulnerable masses, but I haven’t. Not even close. What I can do, however, is outline some common pitfalls and guaranteed constants, and state that April Fools’ Day immediately following Easter is like Adele opening for Carl Lewis.

Avoid all human contact, because humans are out to get you.

Don’t answer the phone, screen all texts, and if you see someone you know across the way who cheerfully waves you over, sprint in the other direction. No one is to be trusted today.

Proof: At one o’clock this morning, I was falling into an April Fools’ nightmare.

I got a call from a friend. I didn’t answer. Why? Because it was late, because it was April Fools’ Day, and because I know the rules. Thirty seconds later, I got a text:

What could really be that important? Do we really need to talk about Thrones right now? Assistance on what to wear to work tomorrow? You forgot, again, how to find that “Temp” file folder on your PC? Unsurprisingly, none of these was the purpose of the call, which, after I finally called back, ended up being a serious talk to warn me about a story coming out that included a passage slamming my existence and a very unflattering head shot.

I played it cool on the phone, but I was completely rattled. I hung up and stared at the ceiling. Two minutes later, another text.

Today humanity is at its worst.

Avoid the Internet, because it’s the only thing more deceitful than humans.

If you’re reading this, and you’re one of “us,” hopefully this is the only thing you’ve seen on the Internet today. Chances are, however, it isn’t, which means you’ve probably fallen victim to “them” numerous times. Advice: Just get off the Internet as soon as you’re done reading this, tweeting it out, sharing it on Facebook, making it your AIM Buddy List away message, and then making it available to all your LinkedIn professional connections.

For your sake, not mine.

Thankfully, there are some things on the World Wide Web that you can reliably bet on being hoaxes today (the complete list is on Lifehacker.) While these sites are usually never funny or that clever, at least you know what you’re getting into when you visit them.

I KNOW THIS ISN’T REAL. BUT I STILL CLICKED IT. BECAUSE THAT’S WHAT “WE” DO.

(It wasn’t real. It redirected me to a Google search for diapers.)

But in a world where Google+ still exists and isn’t a prank, who is to say Google Nose isn’t real? Do you see why it’s confusing, even when you’re prepared?

The premise of YouTube no longer accepting entries, to give itself time to select a winner of the best clip ever, is obviously not true, but there’s still that .000001 percent within “us” that can’t help but think What if it isn’t? What if I write this off as a April Fools’ Joke, and then miss out on my final opportunity to upload the video of my failed attempt to swing on the rings at the Santa Monica Pier?

All the “what ifs,” “but maybes,” and “gotchas” really make this a frustrating time-suck of a day for “us.”

And this is just the surface of the rabbit hole that is April Fools’ Day + Internet.

Sometimes things seem so ridiculous that you convince yourself that they’re April Fools’ jokes, but then they’re not and then nothing makes sense.

As a living, breathing human, you know the information in that headline is false, leading one to believe it’s a prank post, but then you read the piece and the tone seems serious. And then you realize no one was kidding. And then you’re just confused.

Other times, it’s less the headline and more that something like this even exists:

You’re sent something like this as April Fools’ Day approaches, read it, celebrate it as a parody and can’t convince yourself that it’s a prank, even though it was written three days too early and you know that, because it’s in the Wall Street Journal, it’s real. And just like that, it becomes clear nothing is what it appears to be and nothing makes sense and everything is bad.

But then, even while knowing this, yet another Internet tidbit presents itself and you’re still convinced someone is trying to pull a fast one on you:

You see the headline, read the blurb, and because the world has become the Internet Who Cried Wolf today, you assume it’s a joke. A weird, very off-color, horrible joke, but a joke nonetheless, because you’ve learned that on this day people are out to deceive. And then you read more about it and you discover it’s true. And then you feel bad. And then you get sad.

This is the worst day.

“We” have been trained to be so wary of pranks and being tricked that we think everything’s a prank, even the real stories, and then we become so conscious of the prank-like stories that are actually real, we leave ourselves open for actually getting pranked.

Watch the next episode of Game of Thrones a week early on HBOGO! goo.gl/aTYku

This tweet made its way into my feed and, fully understanding what day it was, my initial thought was still Wait, why would HBO do that? That’s pretty awesome of them.

AND THEN I CLICKED IT.

Fun fact: not a link to the second episode.

Yes, it’s a bunch of kittens on a Roomba. Any other day of the year and I’m extremely pleased with this image, but not today. Not when these cute, innocent balls of fur are being used as instruments of deceit.

It’s just miserable all around.

Thankfully, there are a few constants in this world that have been proven to always be true.

Constant no. 1: Things about Chris Brown that you want to be April Fools’ Day jokes are unfortunately never actually jokes.

I deeply trust the famed NYC-based media personality Miss Info, her website, and those who work for her, but before I clicked on this, I was hoping the link would simply redirect me to a picture of a prison. I hoped this, because for a second, I forgot about the rules.

But then it didn’t. It took me to the video for Chris Brown’s “Fine China.” Even though it did, because of course it did, that’s how confused I’ve become. As one actively worried about getting pranked, I’m now hoping to be pranked, even when I know I’m not being pranked.

Just to further prove a point:

April Fools’ Day doesn’t apply to Chris Brown. Oddly enough, I appreciate him for being one of the few things that can be trusted on a day like today. That feels wrong to say, because it is wrong, despite it being right.

Constant no. 2: No one has ever really found out they’re pregnant/having a kid on April 1, and that fact will remain true until the end of time.

I’m serious. And if someone claims that they did, calmly remind them that they didn’t and that they’re a liar. What has happened, however? The “I’m pregnant/We’re having a baby” April Fool’s joke.

Who’s this blue-checked Louis Tomlinson? Twenty percent of the group One Direction. He alerted his 9.78 million followers that he was, in fact, going to be a father. On April 1. And then his new girlfriend, Eleanor Calder, chimed in to further back the story:

But they were lying. Because they’re liars. Pretty little liars. How did I handle the news? I was hurt, appalled, but not surprised. Why? For one, because I remembered the rules, and additionally because I understand this “holiday” can turn even the best people into villains. I wasn’t the only one.

I mean, I probably won’t go that far, but I get your fury, paulwayssassy.

Remember that no one is immune to this disease, the lying disease, not even the leader of the free world.

This isn’t the president. I promise.

And even the pranks that aren’t based in hatred are hurtful because they’ll never really happen, which is sad.

There was a time in my life when I’d never entertained a world where Reginald VelJohnson of Family Matters and Die Hard fame would star in the third Taken installment.

That time has come and passed.

While this video is great, now the world I live in is a world where this simply won’t happen and I can’t think of anything else.

Today, I am Tantalus. Reginald: the low-hanging fruit.

Stay safe out there, “us.” Safe and alert. And whatever you do, find somewhere to hide until Pranking Martial Law has been lifted at the end of the day. Believe in yourself, follow the rules, and you too can potentially make it to April 2.

Filed Under: Chris Brown, Game of Thrones, One Direction