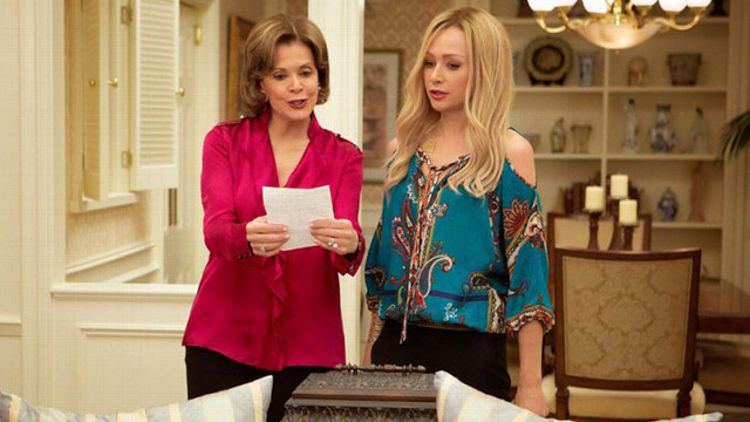 Episode 3 is devoted to Lindsay Bluth, or “the one daughter who had no choice but to keep her life together.” I had gathered from online chatter that Portia de Rossi looks, well, different in it, and I can report that this is true: She looks like a whittled-down, melty-Barbie version of Lindsay, something beautiful left too long in the desert sun.

Is it a coincidence or evidence of the show producers’ shamanlike powers over narrative that the episode’s plot provides some neat existential trapdoors for those who’d like to pretend that there’s nothing strange going on here? The episode introduces an opiate addiction plotline, complete with the layers of denial, dissembling, desperation, and extreme weight loss that come with it. When Marky Bark (Chris Diamantopoulos) tells Lindsay she looks like a junkie — “What are you, 90 pounds?” she takes it as compliment. Even more to the point (or more pointedly disguising it), Marky suffers from “face blindness” — a real thing, and either a description of what’s going on behind the scenes at Arrested Development or a command to those are watching it.

Disgusted by her adoptive family’s greed and callousness, Lindsay heads for the more spiritual and less trademark-protected mountaintop emporiums of India. She hunts for fashion bargains and guidance with equal naiveté, goaded into a higher bid on a jacket by a seller’s plant (“It’ll look great on my wife … or my sickly son!”) and charmed by “the house shaman at the Mumbai Four Seasons” into going back home and “liv[ing] life truthfully.” The shaman also sets Lindsay straight about knockoff purses: “How will I learn?” “Just look at the spelling.”

The back of Lindsay’s head calls Lucille for money to return home. Lucille dangles cash in exchange for Lindsay testifying at her trial in maritime court and wearing a smile while she perjures. Driving a harder bargain with mom than with the Himalayan handbag hucksters, Lindsay deals her down to a grimace. (But she’s not a whore; “I don’t get my money until after I do the dirty thing.”)

The promise of a share of the Bluth “stimmie” reunites Lindsay and Tobias, who go house-hunting under the guidance (such as it is) of a real-estate-bubbly agent (Ed Helms). Helpfully grounding us in the timeline, and miring the Fünke-Bluths in a balloon mortgage, he assesses their not-any-money-right-now situation: “I’m a real estate agent, it’s 2006, that’s all good enough for me. We’re going to put you in a N.I.N.J.A. loan — no income, no jobs, no assets. And you don’t have to make any payments for two years!” Do they agree to it? As Tobias says, “N.I.N.J.A., please!”

(Reminding us that this particular joke was played on many real-life families, the narrator intones, “You have to remember, this was a time when banks were eager to create as much debt as possible.”)

The ensuing McMansion serves two purposes: Mocking the excess of the mid-2000s housing boom, and giving an excuse for de Rossi and Tobias’s David Cross not being in the same shot as they yell at each other from room to room.

In order to prep for Lindsay’s fake testimony, which has to be believable or Lucille won’t pay, Lindsay and Tobias decide to sign up for acting classes at the clinic Tobias has seen advertised on his way to work (Tobias works now?): “MethadOne.” Tobias thinks the name is an analrapist-style portmanteau, but the acting studio is actually a rather bustling methadone clinic.

There, Lindsay meets the aforementioned Marky Bark, son of the tree-hugging Johnny Bark, whom Lindsay abused and adored in Season 1. Marky is there to support his addict girlfriend — played by an appropriately haunted Maria Bamford — she had acted, too, but then, “Like a lot of actors, the teeth go.”

Marky and Lindsay hit it off and Lindsay accepts the invitation for her and Tobias “to join us as we rustle up some grub to shove down our mouths.”

There’s a not-that-funny interlude at a barter-based restaurant — though it does end with Lindsay leaving a shoe for a tip — before Lindsay and Marky succumb to their mutual attraction. They seem like an odd couple, but Lindsay always likes doing things that would upset Lucille, and Marky is pleased that Lindsay isn’t actually paying the mortgage on her wetland-destroying 10,000-square-foot home. Besides, an on-the-fly relationship fits in with his motto, “Live truthfully and skate through life” (also the motto of Halliburton Teen).

They drive to his ostrich farm (!), stopping on the way for a quickie (“That was so … fast.” “I didn’t know how long we’d be stuck in traffic”). En route, Marky reveals that he has no idea what Lindsay looks like (the face blindness). He wasn’t even sure she wasn’t a dude: “Some guys, they’ll fool ya, if that’s what they want to do.”

In the cruel light of morning, the ostrich farm doesn’t seem quite the spiritual paradise Lindsay envisioned: There are drab colors and another hectoring mother. On the plus side, Marky seems to have come around on Lindsay’s looks — the only thing her own mother ever praised. “She lives with us now,” Marky says. “And mom, she tells me she’s pretty.” The truth comes crashing down on Lindsay: “I have the worst fucking shaman.”

Denial has always been a theme in the series: Tobias’s unself-conscious double entendres, the family’s inability to deal with their change in class status, Michael’s doomed romance with Mr. F (a “mentally retarded female”). An audience knowing something that the characters do not is a tool utilized by a lot of, if not all, comedy; to my mind, great comedy usually balances an audience’s knowledge with characters’ wit. (Though great comedy also comes when fools turn out to have more wisdom than anyone.) While stupid-people-doing-stupid-things is a staple of box office hits and Bravo, it’s more difficult and I think more rewarding if the characters aren’t idiots — unable to see the obvious — but simply blinded to the obvious by something: love or greed or arrogance, the kind of things that can blind any of us. That kind of comedy cuts closer to home and with a sharper blade. We can laugh not at just the confusion and high jinks onscreen but at our own narrow escape from the same kind of consequences. We know (or like to think) we’re not Deuce Bigalow, but Bassanio? Maybe. “Ha” is always better when accompanied by “Whew.”

And I think that’s why I found Season 4 — thus far, OK, just the three episodes in; I’ll try to be patient — unsatisfying so far: The Bluths are idiots. They’re not just misguided or greedy or egotistical, they seem to be just plain dumb. The George Bluth of the first three seasons would never mistake blueprints of a wall for a monument five miles tall. And Seasons 1-3 Michael was the grounded guy, the straight man who wound up in ridiculous situations because he was trying to set things right. Even Gob came to realize he never should have given up Banana Grabber animation rights.

It’s true that Lindsay was always the flighty one, not knowing if the wetlands were to be saved, or dried, or saved from drying, though by the end of any given episode she was usually less hapless than disgusted with herself. (And surely she would know not to buy a purse designed by Louis Vuitton spelled “with two e‘s.”) Still, of the three episodes so far, the main character of this episode bears the most resemblance to the character of seasons past, even if her face doesn’t.

Callbacks (please point out what I missed in the comments):

Potential call-forwards (again, put your nominations in the comments):

Tobias sings to Lindsay, “Oh, is that a gal I see / no, it’s just a fallacy!” and muses, “What’s that from?” The narrator answers, “It’s from nothing,” which seems like a knowing acknowledgement of the overreach that can happen when one, say, looks for callbacks and call-forwards in any given television show. Sometimes a joke is just a joke.

Similarly, Lindsay asks Lucille, “Am I accidentally funny or am I supposed to be funny?”

Tobias mentions that DeBrie is “the perfect age to be a Hollywood actress, 42.” De Rossi is only 40, but the line still nags at my sense that maybe someone realizes that whatever de Rossi looks like, or has done to herself, she’s fighting a battle against a culture as well as time when it comes to celebrity.

How We'd Fix Will Smith's Career in Six Simple Steps

And the Winner of the WGA's Giant List of the Best-Written Shows Ever Is ...