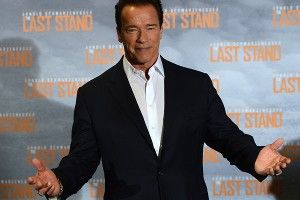 Surprise, surprise: Very few people said the words “I simply must go see the disgraced former governor of California palling around with a dude who used to get his nuts Tasered on a regular basis” this weekend. In other words: The Last Stand, Arnold’s big post– politics and secret-love-child-with-nanny return to the multiplex, flopped at the box office, managing only $6.3 million and a 10th-place finish. My opinion? Johnny Knoxville should have been wearing a dumber hat.

Schwarzy’s not the only one feeling down this morning. Mark Wahlberg caught a clunker, too, with Broken City managing only $9 million and a fifth-place finish (Russell Crowe is in that movie as well, but he’s not upset because of how everyone loves him so much in Les Miz). But Arnold had big plans to storm back into Hollywood; this one’s got to smart a bit. So, no, Schwarzenegger won’t reclaim his former home on that box-office throne, at least not yet (he’s got a bunch of stuff coming up, most insanely that Conan reboot). Which is fine by Jessica Chastain — that means more room for her up there: With the 1-2 finish of Mama and Zero Dark Thirty, it looks like J. Chast is gonna straight-up make herself comfortable on that opulently gilded seat. (This “throne” analogy is confusing, I grant you that. I guess I’m suggesting that there’s space for more than one person at a time on it? And so because Arnold’s flick did so poorly Jessica gets it all to herself?)

Anyway: Mama — Chastain’s new PG-13 horror flick — took the top spot, with $28.1 million, while ZDR came in second, at $17.6 million. Mama definitely over-performed, an achievement one Universal executive credited with “advertising on Twilight [Breaking Dawn — Part 2] [with a] really scary trailer targeted to girls.” Deadline thinks it had more to do with Guillermo Del Toro’s hands-on production work, hearing from one rep that “Guillermo was present at all crucial stages of pre- and post- production, including color timing and final mix.” And they are all wrong, of course: Mama, and also Zero Dark Thirty, took over the box office because Jessica Chastain is the newest ultra-bankable A-lister, a complete buzz saw of mass appeal that no one will ever again dare challenge. And I, for one, welcome our new etherally floating box-office overlord.