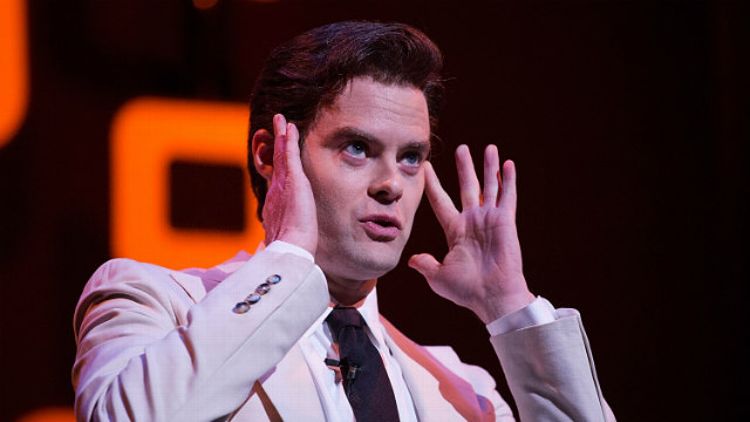 Bill Hader was an SNL presence so precious, he merits more than one good-bye. His impressions were among the cast’s best (Kate McKinnon, I see you), but he also brought to life original characters that were layered despite the limits, time-wise and otherwise, of the sketches in which they appeared: Stefon, Vinny Vedecci, Greg the Alien, and, though he simultaneously terrified and depressed me, senile reporter Herb Welch. Hader was responsible for the majority of the personae you wanted to hang out with after their four-minute segments ended; they were always so charming, even when they were embodied by a bloodthirsty, guts-hungry take on Dateline’s Keith Morrison. If they were real, you would want to park their imaginary butts on your sofa to take in all of Hader’s Criterion double-feature picks, drink margaritas, and gab. Hader shines bright like a di-mon, and when I attended a showing of The Great Gatsby last night, huddled under a gray cloud of casting-department disappointment, I mentally replaced Tobey Maguire with Bill Hader for a second. He seems able to take on anything, from a hypothetical Nick Carraway to James Carville to creative consulting/producing South Park. As we look forward to Hader’s next move and contemplate the uncertain future of SNL, let’s spend an hour or so staring zonk-eyed at the computer in honor of some of his greatest hits. Cue up the DJ Baby Bok Choy single, everyone. It’s Stefon’s funeral (just kidding, he’ll pop back up in a year to give a special appearance like Gilly) and we’re going to Boof to shoot meth mixed with his ashes.

La Rivista Della Televisione’s host, Vinny Vedecci, sits at a table with an ashtray full of smoldering butts, periodically screaming at his producer (Fred Armisen) — who has a spaghetti fork in one hand and a cigarette in the other — for forgetting to book a translator for his guests. Choosing the best Vinny sketch is impossible, so here are two. In the first, Vedecci interviews Bon Jovi and shows him his single “Blaze of Glory” being used as a jingle for Blaze cigarettes, the brand for babies. In the second, Vinny impersonates Malkovich to Malkovich before they view a clip from the Italian cult classic, Being Vinny Vedecci (“Being Vinny Vedecci is pornography, 20 hours”). Vinny’s young son (Bobby Moynihan), channeling Tadzio, stops by to pester Malkovich with questions and chain smoke some pacifying devices (no red wine this time). Hader executes fake Italian like Adrian Celentano does fake English: perfectly.

It’s an interesting coincidence that Hader’s most beloved character, Stefon, first appeared in a sketch with host Ben Affleck in 2008. When Affleck hosts the season finale this weekend, we may get some synchronicity if Stefon shows up to take his final bow — the gay nightlife correspondent began his life as Affleck’s brother and screenwriting partner before becoming a staple of the “Weekend Update” desk. While the Zoletsky brothers pitch their “family movie,” Stefon describes “just, like, quick, sloppy cuts of, like, mascara running down [the actor’s] faces, and, like, adult baby fantasy shots of like, diaper people, and they’re into everything.” Stefon is the only character of fiction who could probably talk your grandmother into a leather bar; his appeal is strange and powerful. He has a son, and a dog named Bark Ruffalo. His father is David Bowie. His hands serve dual purposes: They’re both giggle-silencers for Hader and makeshift blankies to ward off omnipresent amphetamine-induced panic attacks for Stefon. For all of Stefon’s eagerness to shock you into somehow being enticed into a trip to Crease, he always seems worried that he’s about to go too far — or explode, leaving spatters of Ed Hardy patterns all over the soundstage. That accounts for one reason why he’s so weirdly relatable. Normally, an actor repeatedly breaking character can come off as self-indulgent, but never Stefon — in fact, writer John Mulaney made it a point to mess with this particular bit, and watching Hader try to hold himself together is part of the appeal.

If you are not familiar with Keith Morrison, acquaint yourself, and then get friendly with him guest-starring on Seinfeld. You good? OK, because Hader’s Morrison takes your basic Morrison and makes it into a supreme pizza. Morrison is just the jumping-off point for what reads as a funny but creepy commentary on true-crime fans (of which I am one) and weekly sensationalized newsmagazines. It does to rubbernecking what GIFs did to the side eye: boils it for hours into a couple of concentrated frames that become mirrors of your soul’s deepest secrets and most closely guarded desires to get all the dirty deets on a murder case.

Hader’s Ragin’ Cajun James Carville started out strong, but gained momentum like a greased alligator down a waterslide. The political strategist was unpredictable and ebullient, such a straight-shooting analyst (“Republicans sit up in the morning, the first thing they say is ‘NO!’”) that it almost made you forget he was king of the snakes.

CLINT EASTWOOD AND THE CHAIR

I didn’t realize it at the time, but SNL’s send-up of Clint Eastwood’s RNC chair speech would come to replace the original in my mind. I think maybe it’s because Eastwood’s political performance art just made me sad, and I needed to overwrite it with another interpretation in order to avoid carrying around the confusing baggage of the original spectacle. Hader, as Eastwood, eats a rotisserie chicken during the chair’s monologue and you can practically see the teenagers on his lawn dancing in his eyes. It was dead-on, but somehow not unkind.

LINDSEY BUCKINGHAM, “WHAT UP WITH THAT?”

Hader’s mute Lindsey Buckingham was the rug that really tied “What Up With That?” together. It can only be described as a golden ratio of eyebrow-to-mouth movement. It was probably after I saw the first “WUWT” that I started noticing Hader in the background and watching him more closely, even when he never became the focal point of a skit.

Hader’s long-suffering Vincent Price, a taxidermied raven chilling on his shoulder, anchored these sketches in a vital way. Without him as Price, I think they would have tanked.

THE CALIFORNIANS (WITH JOSH BROLIN)

I firmly believe that the inspiration for Hader’s Californian was the O RLY? Bird, and I won’t hear any arguments to the contrary. Welcome back to Los Angeles, my fine blond friend. Pull up a papasan chair and let’s get to know each other.

ALAN ALDA IN BACK TO THE FUTURE

Sandwiched between Samberg’s solid Nicolas Cage and Armisen’s disdainful, shy Prince, you wouldn’t think that an Alan Alda impression would be the one to knock it out of the park. Without any physical signifiers other than a sweater under an off-brand Members Only jacket, Hader nails Alda so well that you have to wonder why that’s something he had in his back pocket. Such well-crafted mimicry almost bleeds into uncanny valley territory, but it’s the kind of obscure talent that has gained Hader such an obsessive fan base. The work he puts into these things seems to allude to a very interesting and rich personal life, making him the perfect candidate for TCM guest-programming spots and voice-over gigs. His inspiration appears to come from a place of organic excitement rather than marketability; his face is inherently trustworthy, even when it twists itself up into two rows of teeth topped off with a bald cap. He’s aware of this (who can best him at playing polite but vaguely sadistic game show hosts?), and manipulates it without giving you any reason to resent him for tricking you into loving him.

Hader has a Don Draper quality: He makes the unnerving into something aspirational. There’s a certain amount of intelligence required to take on satire, but some element of his performances always made him seem like the brainiest cast member. Whether Hader slaved over his Alan Alda or just tricked us into believing he had doesn’t matter. Saturday Night Live was a great vehicle for his many talents, but part of me is glad to see him graduate to whatever lies ahead. With one last CLING! on the triangle, he’ll duck out in the wee hours of Sunday, into the great unknown. In the words of Rihanna, palms rise to the universe. Buona fortuna and buonanotte.