An ‘Insidious’ World: Why James Wan and Leigh Whannell Are Masters of the Horror Film Funhouse 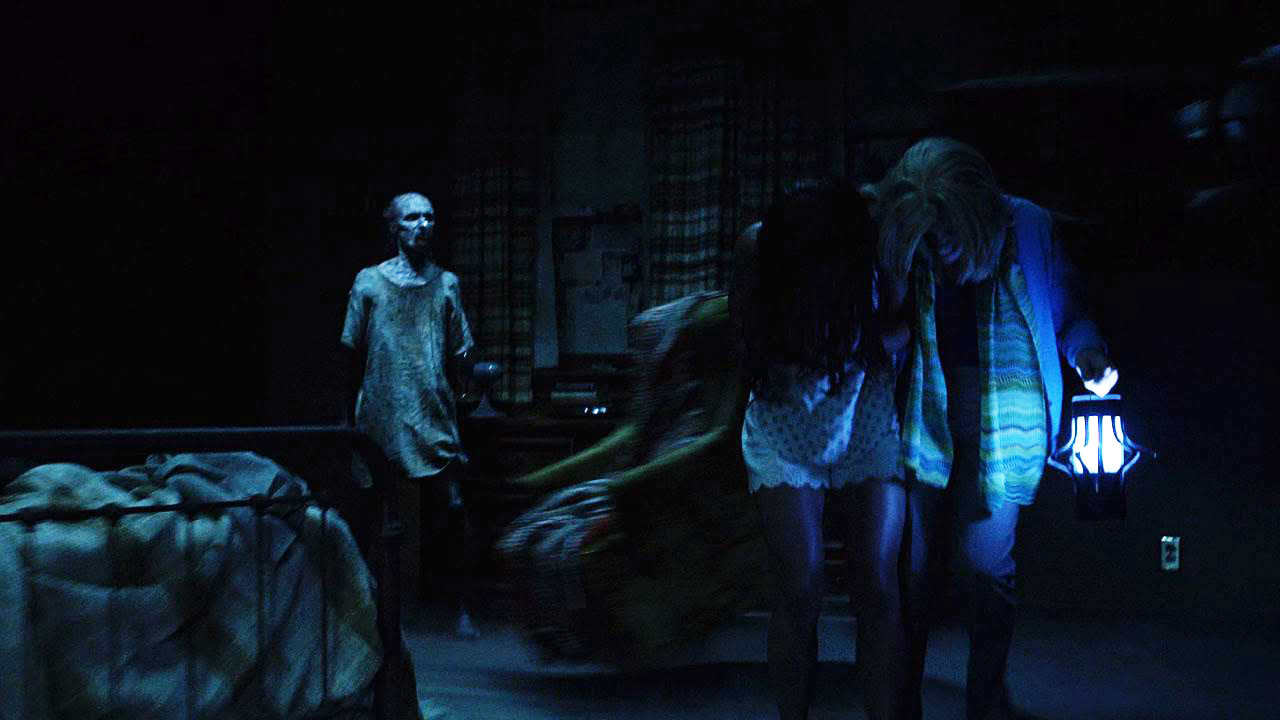 Creating incubated universes in horror is standard operating procedure. Poltergeist, Hellraiser, even children’s fare like Coraline have explored these other worlds, whether it’s “hell” or a dark dimension. The Insidious franchise has done just that with its creation of “The Further,” a dark place where the tortured souls reside, seeking to feed off the living or, in the case of Insidious: Chapter 3’s Quinn Brenner, bring the living back to this dark zone.

Insidious: Chapter 3 takes place a few months before the original film’s plot and follows the Brenner family’s daughter, Quinn (Stefanie Scott), as she tries to contact her recently deceased mother. After getting a chilling reading from the series’ psychic, Elise Rainier (Lin Shaye), Quinn is repeatedly visited by a mysterious waving man. It’s the vision of this waving man that will eventually lead Quinn to get hit by a car, leaving her with two broken legs and stuck in her bed for the rest of the film. As the man — a decrepit, wheezing evil spirit wearing a gas mask — begins to haunt Quinn more frequently, it becomes clear to the family that the spirit is attempting to capture her soul and bring her to the dark side. From there, it’s all about Elise crossing into this dark territory to get this girl back.

The film is carried by strong performances from both Stefanie Scott and the consistently excellent Shaye, but the plot leaves a lot to be desired, considering the diverse scares delivered in the first film. It often feels like the third installment relies too heavily on making you stare at shadows on the screen. And because of the film unnecessarily being situated as a prequel, it feels too separate from the first two films in the franchise. That being said, there’s a reason Insidious has managed to even pop out a prequel, and that’s in large part the work that James Wan and writer Leigh Whannell did to create this world.

The Insidious franchise is at its most interesting when it moves beyond tired exorcism tropes and investigates the realm of “The Further.” As Elise describes in Insidious: Chapter 3, there are two worlds that exist outside the human one: dark and light, the Further being the dark. It’s this free-for-all, tabula rasa world of “The Further” that has kept Insidious thriving.

On film, the Further is a dimly lit, blue-toned mirror world, populated with an assortment of ghosts who make it as off-kilter and creepy as possible. There are your usual demons: doll-faced women frozen into a murder scene, and ghost children who run around the house. It’s in this space that the Bride in Black (who terrorizes Elise in all three films), the Lipstick-Face demon (which captures Dalton in the first film), and Quinn’s tormentor, the “Man Who Can’t Breathe,” all exist. Each is a distinct, scary figure that feels completely out of place next to the other.

In films like the Insidious series and another Wan film, The Conjuring, it’s almost as if Wan and Whannell couldn’t pick a monster to pin their films on, so they went with as many as they could dream up. And while these films certainly have their megavillains — faces you can tie a series to, like the Bride In Black and the witch Bathsheba — they are also stocked to the gills with so many minor creepy characters that they feel like a testing ground for who can scare the hardest. The Conjuring’s “Annabelle” doll was so effective in the film that she even earned her own spinoff.

What this duo has excelled in is creating horror that is distinctly spatial and full of potential, allowing their films to turn into long-running franchises. The duo’s first megahit, Saw, which led to six sequels, was all about traps: mazes, bear claws, broken glass. And while the scares themselves were rooted in torture-porn challenges, the longevity of the series relied on how versatile this Saw space could be. Insidious carved an infinitely scary environment with the Further, even though two compelling villains led the movie. And The Conjuring was far beyond a typical haunted-house flick, resulting in a surprisingly good tangled mess of witches, demonic forces, exorcisms, and grounds plagued by numerous spirits. Not to mention that the film was based on the real-life paranormal investigators Ed and Lorraine Warren, a setup that has already given way to a Conjuring sequel.

James Wan and Leigh Whannell make movies that feel like the physical equivalent of walking through a funhouse. This is about more than just monsters. It’s about places with dark corners where almost anything can exist.

Mr. DNA: How Hollywood Tinkers With Evolution to Grow New Spielbergs in a Lab