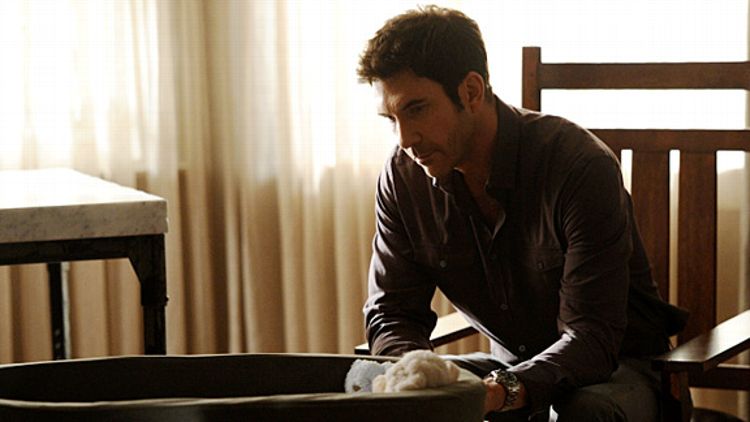 Watching the finale of American Horror Story, I figured — like many people probably figured — that Ben (Dylan McDermott) would be making a gory exit before the last commercial break. He had lost his wife in childbirth (along with one of their twins) in the same episode during which his dead daughter came out to him as a ghost, which is a lot to handle even if you’re a therapist with access to all sorts of serotonin reuptake inhibitors. That’s not to mention all of the guilt he felt from moving his family to the haunted mansion in the first place.

But he didn’t kill himself in the finale, though he thought about it in a series of Lifetime-network-style blurry shots of guns, wristwatches, and expository spirit monologues. Hayden (Kate Mara), with some help from a couple of the other evil spirit residents, hanged him from the chandelier over the stairs.

Killing off the Harmons was a clever move. American Horror Story is as much soap opera as it is horror tale: In one season, it’s created a complex and sometimes perverted rubber-band ball of relationships between the living and the dead — to say nothing of the dead with the scores of other dead. Hot spirits (Constance’s former boyfriend, Nora “Where Is My Baby” Montgomery, nymphomaniac Hayden, Tate if you’re a member of the Tate Langdon online fan club — which is pretty sizable considering he’s a mass murderer who is usually crying) having one-night stands with one another and dressing up in rubber suits to impregnate the living … that’s a lot more to play with than Passions! The show is so fluid, with so many chronological jumps and such a fascinating group of rotating characters, that its longevity relies on the introduction of new and unsuspecting residents to the so-called Murder House. The Harmons had to be archived for the show to continue to dump its bag of glittering costume jewelry into our laps: They either had to get out, or die in there.

Dead people can be so static without a few living souls to toy with — after all, the dead can’t die again, so there’s very little at stake. That’s why the world-weary people who survive more than a few months in the house must eventually become relics of their tenancy, and the house has to go back on the market after a $20,000 chop. The dead and the living need to keep batting the ball between multiverses. Los Angeles real estate being what it is, it never seems too far-fetched when another young family breezes through with the Harmons’ former real estate agent and falls in love with the pasta arm.

A new family, complete with Joe Jonas-doppelganger teenage-Violet bait, moves into the Murder House and is almost immediately subjected to a theater of scares when the Harmons try (and succeed) to frighten them out to save their lives. Ben, Vivien, and Violet treat the new family to a kind of condensed syrup of Murder House disturbing best-ofs: the rubber suit, of course; dead women sitting up abruptly in bathtubs; the Black Dahlia; and an evisceration for good measure. Having chased the family away, and with Vivien having reclaimed the ghost twin from basement-dwelling Nora Montgomery, the dead Harmon clan can enjoy a nice Christmas together with Moira, decorating the tree and smiling at each other, passing the permanent spirit newborn around and generally seeming more content than they ever did when they were alive.

This is, of course, a completely unsustainable happiness, considering how crowded the house is with dead drama queens. Jealous Hayden and Tate watch from the wings, stuck in their eternal misery and isolation. It’s strange that both of them want to hang out with Ben so badly, because while Ben may be many things, he’s never seemed particularly fun to hang out with. Tate even bothers confessing to and apologizing for all of his crimes, his eyes beautiful wet hot tubs of hunky murderousness, simply because, he says, he wants Ben to “just … hang out with me sometimes.” Ben declines. I don’t see why Tate doesn’t spend more time trying to hang out with Vivien, the mother of his demon spawn. She’s always seemed like the exciting one, and she plays the cello!

Of course, my favorite character, Constance, whose children we need to talk about more than we do about Kevin, had managed to snatch Vivien’s living twin from Hayden and sneak him back to her den of iniquity — perhaps longing for a baby more than ever following the death of her last living child, Addie. (I wish she’d died in the house; I really miss Jamie Brewer.) Three years later, we watch Constance walk into the salon to get her hair did and gush to her stylist about her adopted son and the meaning and beauty he’s lent to her life. She is in prime Constance form: I love a long, florid speech delivered by a woman wearing a headscarf. There is nothing like it. She returns home to find her babysitter murdered, and her adopted son (and biological grandson) Michael cackling on a rocker, blood on his hands. “Now what am I going to do with you?” she asks him. I think she means the mess. She’s obviously used to disposing of the bodies of murder victims. That’s what she does all day, besides making cocktails and ipecac cupcakes.

Who knows what Season 2 of AHS will bring? I remember reading this excellent All My Children flowchart and trying to wrap my brain around 40 years of such an overpopulated fictional landscape. Each character on American Horror Story so far has been engaging, dealt a super backstory or, at the very least, a physical flaw that grabs your eyes in its fists, like headshot-man’s ghostly wife with her smoldering skin and billionth-degree burns. They are, sometimes unfortunately, unforgettable. Haunting, even. For a show that has found so much success in over-the-top excess, there could have been no better finale than to open the door for more creepy guests. Long may you run, jar-baby bloodbath soap. You may not capture All My Children‘s former audience, but you have captured its rapt macabre twin.

Previously:
The Survivor Finale: In Praise of Sophie
The American Cooking Show Boom: Why We Watch
After the Suicide: Understanding The Real Housewives of Beverly Hills

Aaron Sorkin Has Some News