Age of Exhaustion: The Year of the Self-Loathing Summer Movie 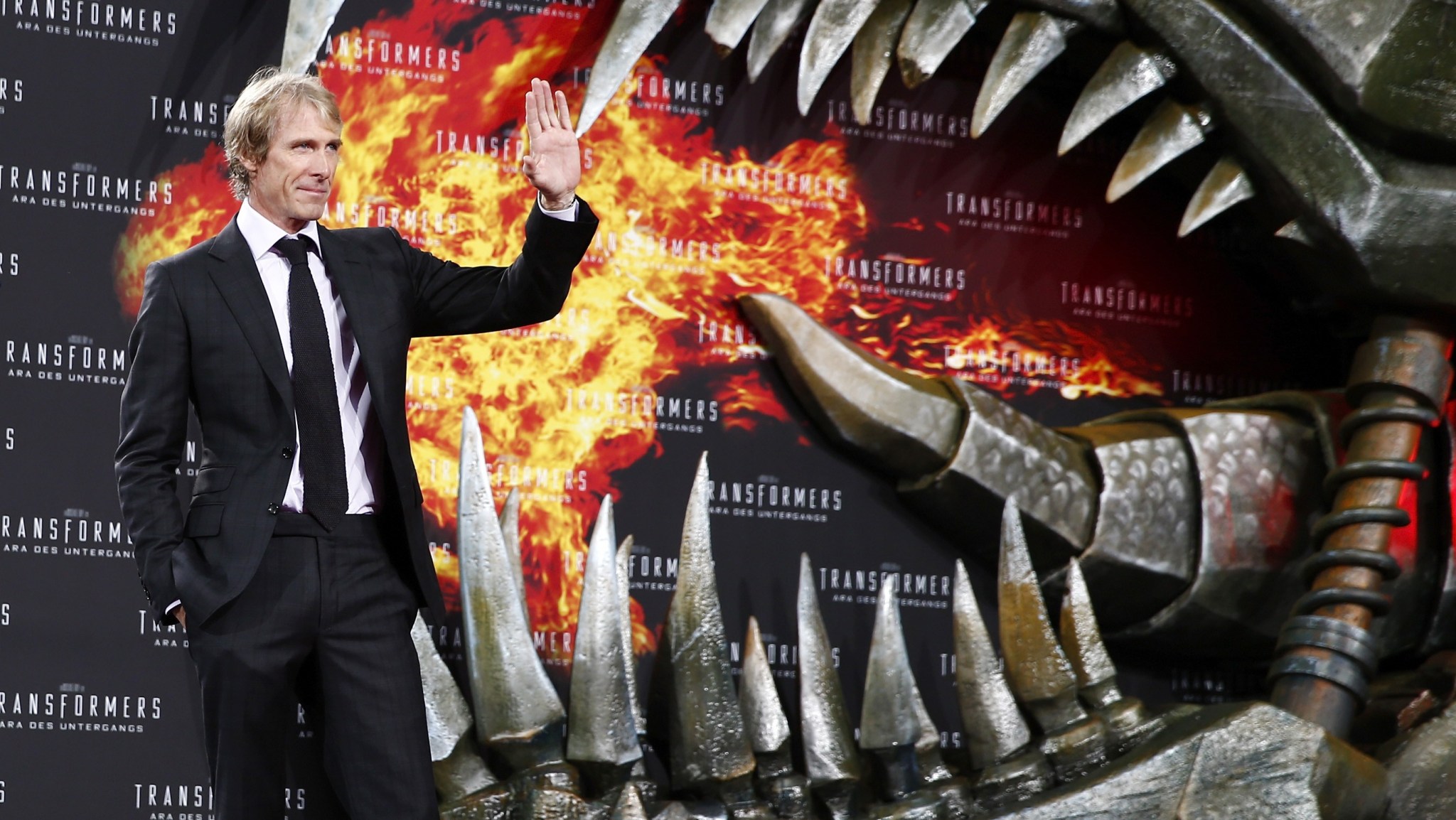 The owner — played by the character actor Richard Riehle, the “Jump to Conclusions” guy from Office Space — is explaining why he’s selling his theater after what the marquee describes as “79 Great Years.” The owner says things were better back when the movies had “dancing girls, with big cha-chas.” He points to a poster for Howard Hawks’s 1967 Western El Dorado and says, “I liked that one.” It’s clear that his theater was a palace once, the kind they don’t build anymore, but the owner’s sneering grandson can’t wait to be rid of it. Wahlberg is Cade Yeager, a shade-tree roboticist who’s there with his partner (T.J. Miller) to dig around for parts worth salvaging. They will leave with a dusty, bullet-riddled old semitruck that turns out to be a robot in disguise, but also an antique projector, whose value only Cade can see.

Director Michael Bay’s fourth Transformers film raked in more than $300 million in five days of global release despite generally scathing reviews. Its 17 percent average on Rotten Tomatoes is a career low even for Bay, who long ago became synonymous with a strain of priapic bombast that critics love to hate. The easiest way to interpret the movie-theater scene is that it’s Bay flipping the meta-bird to his detractors by putting their words in the mouth of a doddering old man. Or perhaps it’s the auteur sticking out his estimable chin and offering those detractors one free shot, an invitation few of the critics who’ve shredded the movie have been able to resist. “Having declared cinema dead,” wrote the Dissolve’s Matt Singer last week, “[Bay] then spends the next 165 minutes desecrating the corpse.”

But both of these readings fall short for me. This isn’t Roland Emmerich exacting petty revenge by naming the buffoonish politician in his Godzilla remake “Mayor Ebert.” We’re clearly meant to look at this theater, a cathedral crumbling to dust, and feel a pang for all it represents. When the grandson apologizes for the old man’s yammering and calls him deaf and senile, the old man says, “I heard that,” so we know he’s neither. The next time the grandson tries to shut his grandfather up, Yeager comes to the old man’s defense, admonishing the grandson — whom he later addresses, for no real reason, as “Snakeballs” — to let the man talk. So what’s Bay trying to say by having someone say these things to us, and having the protagonist underline its merit? Why include this moment, in this of all movies? Can he possibly be serious?

Critic Kevin Lee points out in this Transformers roundtable that El Dorado was essentially Hawks’s remake of his own Rio Bravo. So maybe Bay is gently reminding us that Hollywood has always been a commercial enterprise, that the movies were no more innocent or artistically meritorious when they were about dancing girls with big cha-chas. But for me, the Snakeballs scene seems to serve the same purpose in Age of Extinction as the shots of dilapidated movie houses in the opening credits of Paul Schrader’s The Canyons did in that film. It’s a seeming non sequitur that actually decodes the movie we’re about to see, explicitly framing what follows as a worried meditation on the state of cinema in the digital age.

I’m aware this is a trollish-sounding claim to make about a Michael Bay movie, particularly one that seems born of a deranged determination to be even more of a bloated, noisy, incoherent CGI demo reel than the three Transformers movies Bay made with Shia LaBeouf as the token non-bot. In Age of Extinction, the plot is a losing Cards Against Humanity hand and the people are stick figures, but the machines are astoundingly detailed, with thousands of articulated parts that move at incomprehensible speeds. “I make movies for teenage boys. Oh dear, what a crime,” Bay famously said once, but this one feels like it’s aimed at a future generation of children who’ll be born with hypersensitive compound eyes, like fruit flies or horseshoe crabs.

But the movie doesn’t just exemplify senseless technological advancement — it depicts it and critiques it. One of the villains is Joshua Joyce, a Steve Jobs–ish tech billionaire played by Stanley Tucci, who has reverse-engineered an army of new robots that can transform into Chevrolet Traxes or glittering clouds of pure CGI, like little tornadoes full of soda-can shards. Joyce is in cahoots with Harold Attinger (Kelsey Grammer), a government agent who is in turn cahooted with robot bounty hunters from space who have diabolical plans for Earth. What Joyce and Attinger have in common is that the robots don’t care what happens to them. They’re pawns who don’t realize they’re pawns.

At first, a movie in which the script feels entirely subservient to digital effects seems like an odd place to articulate the message that machines are not our friends. But after a while — I think for me it happened before the movie takes its not-at-all-pandering third-act business trip to China, but after the bad robots started destroying Chicago again, just as they did in the third movie, as if to acknowledge that nothing really changes in these films but the title — the disconnect begins to feel entirely intentional. It’s a state-of-the-art movie that’s openly conflicted about the state of the art. Age of Extinction makes almost no sense as a story, but it makes perfect sense if you watch it as Bay grappling with his own legacy as a filmmaker. For all his snob-alienating bashability, he used to make movies in which human beings occasionally did more than run from explosions. But over the course of the first three Transformers movies, he purged the blockbuster formula of humanity and taught audiences to like it. The bludgeoning excess of Age of Extinction is Bay’s attempt to short-circuit a Skynet of his own creation; he’s taking viewers out behind the woodshed and making us smoke a whole pack of Autobots as a kind of aversion therapy.

“If we don’t, someone else will,” Tucci says, when the wisdom of his decision to meddle with discarded alien-robot parts is questioned. “You cannot stop technology!” Tucci and Grammer, human megalomaniacs who inadvertently abet the robots who’d extinguish life on Earth, are Bay’s onscreen avatars; the army of evil man-made Transformers is, roughly, Transformers itself, along with whatever bag-of-silverware-in-the-face-ish IMAX 3-D franchise will come along soon enough to make Transformers seem soothing and humane by comparison. Age of Extinction is a movie about how the Transformers movies ruined movies. It’s Michael Bay using the master’s tools to sabotage the master’s fleet of Ferraris. It’s a $200 million viewing apparatus for staring into the abyss. 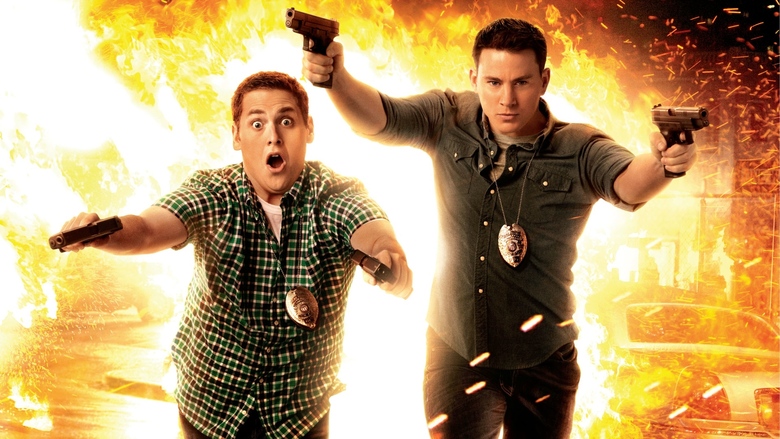 Even before Bay rolled out his thunderous mea culpa, the summer of the self-loathing blockbuster was in full swing. The season’s highest-grossing comedy is 22 Jump Street, a cash-grab sequel whose premise is that cash-grab sequels are embarrassing and lame, a movie that exists because everyone involved is both too cool to make a sequel and too weak (or too contractually obligated) to say no to one. The story begins with Nick Offerman’s police chief ordering Channing Tatum and Jonah Hill’s buddy-cop characters to go back to doing what they did before, because it worked. The climax features Tatum hurling a grenade into a helicopter while falling into the ocean, traditionally an action hero’s cue to say something cool; all Tatum’s Officer Jenko can come up with is the self-referential “Something coooool!” When it’s over, in place of an end-credits gag reel, we get a parade of fake clips and posters for dozens of future Jump Street sequels, most of them too plausible to be all that amusing. It’s as if directors Phil Lord and Chris Miller are blowing up this well so they’ll never be tempted to go back to it.

The summer’s biggest surprise bomb, meanwhile, is Doug Liman’s Edge of Tomorrow, with Tom Cruise as a military officer endlessly reliving the day of a cataclysmic battle between humanity and invading aliens. The Groundhog Day hook takes the Tom Cruise ur-plot — slick, smug guy is stripped of his superficial sense of world-mastery by circumstance and struggles to right himself through personal growth — and imbues it with surprising philosophical depth. By reimagining a sprawling CGI battle sequence as a recurring dream Cruise’s character can’t wake up from, Edge of Tomorrow slyly comments on the regurgitated nature of summer-movie storytelling and takes up the metatextual question of whether it’s possible to create meaning within a form this circumscribed.

Cruise’s Major Cage beats the game eventually, because of course he does. But the key moment in the film comes earlier, when Cage — having already died a thousand deaths without much to show for it — wakes up once again at NATO’s Heathrow Airport base and decides to go AWOL. He flees by motorcycle and winds up at a pub in London, watching the battle on TV. There’s still no escape for him — the old barflies size him up immediately as a deserter, and within minutes the aliens Cage has been fighting on the beaches of France take London and Cage is killed yet again. But for a second, the movie toys with the idea that Cage could just ride off into the fog, leaving the whole “grinning Tom Cruise triumph or death” binary behind. The unspoken implication: What if movies like this one could deviate from the formulas that govern them? What would happen if we used the $178 million this film reportedly cost, and the abundant technical genius that clearly went into it, to create something besides a new and improved vision of the apocalypse? Would it really be the end of the world?

If Michael Bay’s ever asked himself those questions, he’ll never admit it publicly. He’s put too much work into creating MICHAEL BAY, a larger-than-life character who eats bad reviews for breakfast off a solid-gold platter, and anyway he’d never give his critics the satisfaction. But if your brain hasn’t shut down to safeguard its last remaining unscorched neurons by the time the final act of Age of Extinction unspools, it’s all right there on the screen. Tucci’s Joyce realizes what he’s wrought and joins the good guys, taking personal responsibility for a duffel bag containing the doomsday MacGuffin, preventing it from being deployed. When it’s all over, his geologist assistant tells him, “I’m proud of you”; Wahlberg’s Yeager pulls the now-repentant capitalist in for a bro-hug. Before that, though, there’s an interminable fight scene involving robot dinosaurs and the near-destruction of Hong Kong by a UFO armed with some sort of giant magnet that sucks up cars and boats and buildings indiscriminately. It’s excess pushed to the point of near-total abstraction and a perfect metaphor for the movie: Look at all of this junk. Look at how pretty it is when it flies around. I don’t know that I would ever have pegged Michael Bay as the first director who’d manage to turn the summer blockbuster into a critique of the blockbuster mentality and still make hundreds of millions of dollars doing it. But like the old Vulcan proverb says, only Nixon could go to China.

“Series Four! At last! It’s always special to return to ‘Sherlock’ but this time it’s even more special as we’re doing… a Special! Not only that, we’ll then be shooting three more episodes which will take Sherlock and John Watson into deeper and darker water than ever before. The whole ‘Sherlock’ team are terrifically excited to return for four new adventures. The Game is on — again!” -- 'Sherlock' is coming back, Cumberbitches. (And Freemaniacs, we guess.)