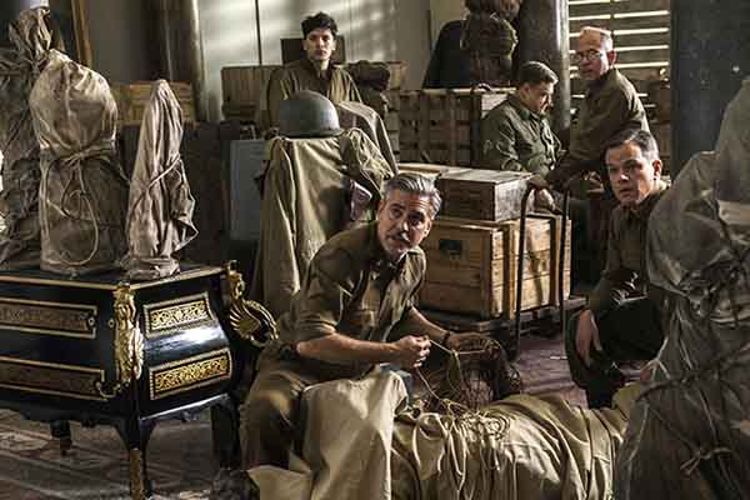 Monuments Men is about American national monuments like George Clooney and Bill Murray and Matt Damon. But it’s also about those gents playing intellectuals sent to WWII Europe to rescue priceless art from ze Nazis. The release was recently pushed from November 15 to early 2014, which was already a shame since the film sounds and looks great, or at least fun. But now the delay is a damned travesty, because roughly “1,500 modernist masterpieces — thought to have been looted by the Nazis — have been confiscated from the flat of an 80-year-old man from Munich, in what is being described as the biggest artistic find of the postwar era.” Our sincerest condolences, George. We’ll see the movie anyway, even after the art-find fervor subsides.

The presumably folktastic soundtrack to the Coen brothers’ Inside Llewyn Davis is streaming at NPR. Go folk yourself.

Wanna know how dedicated Woody Allen is to having his characters talk about “making love”? Here’s the supercut. [h/t Huffington Post]

Amazon will premiere its first two original series, Alpha House and Betas, on November 15 and November 22, respectively. The pilots have been online for a bit; John Goodman stars in one.

The Simpsons’ blackboard tribute to Marcia Wallace, in which Bart Simpson makes you tear up.

Mere photos of Chris Kirkpatrick’s wedding are better than the ’N Sync reunion was.

You could blow your mind in worse ways than Chvrches’ new video for “Lies.”

Skyler alert: Anna Gunn will appear on The Mindy Project for Episode 13.

And in case you missed it: Bieber + Brazilian brothel, bro.

The Hobbit: The Desolation of Smaug Gets Another Pristine Trailer