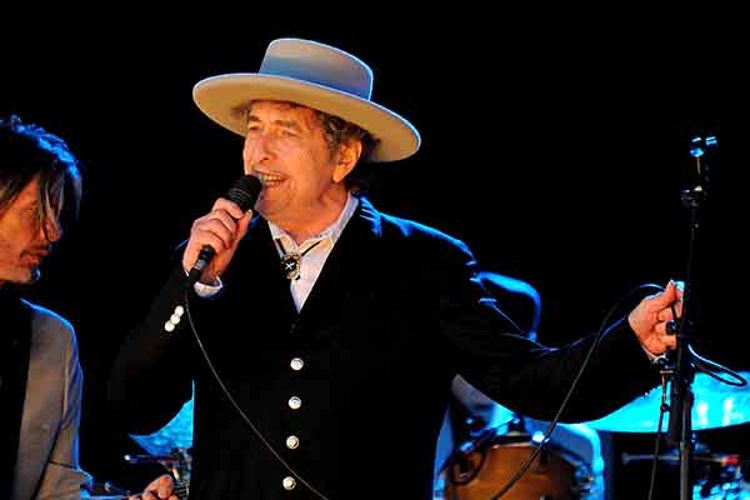 This summer, Jim James learned that the man so enigmatic six people had to play him in I’m Not There really is that inaccessible. “The whole concept of [Bob Dylan’s AmericanaramA Festival of Music tour] was supposed to be super collaborative,” the My Morning Jacket front man tells Rolling Stone. “We were expecting to be sitting around the campfire with Dylan at 2 a.m. and go, ‘Let’s cover all of Desire tomorrow!’ We had all these pipe dreams.” And then? “Bob really wasn’t around. We never talked to him once. He does not hang, which is fine and understandable … or it’s kind of understandable. I don’t know.” Eventually James and Jeff Tweedy got to perform onstage with Dylan a little, but they still never got to speak to the man who wore sunglasses into the White House.

Local sports anchor does whole segment as Ron Burgundy, albeit not especially spectacularly. Props for the commitment, though. [h/t Deadspin]

John Goodman and the Coen Bros. discuss all the lovely, fine work they’ve done together. “People quote [The Big Lebowski] to me all the time,” Goodman says. “Thank God they’ve refrained from quoting that scene where I’m screaming at Little Larry while I’m busting up the car.”

The Heat 2 might never happen, but at least Sandra Bullock and Melissa McCarthy trick-or-treated together!

Jill Scott and Dan Aykroyd have joined Get on Up, the long-gestating James Brown biopic from The Help director Tate Taylor.

M.I.A.’s Matangi is streaming via a bevy of YouTube clips. Here’s the title track.

LOL: Jay Z is about to have a cologne called Gold.

This Guy Fieri courtroom sketch is (a) a milestone for human art, and (b) completely unrelated to Fieri’s recent altercation with his hairdresser. [h/t @joshpetri] Ewan McGregor’s lovable presence will be available on a real stage on Broadway when he stars in “The Real Thing, the 1982 play that many theatergoers consider Tom Stoppard’s best.”

Oh, that thing where SNL hasn’t had a black female cast member since 2007? Lorne Michaels knows, he knows.“It’s not like it’s not a priority for us. It will happen. I’m sure it will happen.”
A minute-long clip involving Shia LaBeouf’s Nymphomaniac sex scene is here, if you need that happening on your screen.

And Eminem is just a cupcake-loving kind of guy.