Afternoon Links: In Case You Are Forced to See Getaway This Weekend, Here's What You Need to Know 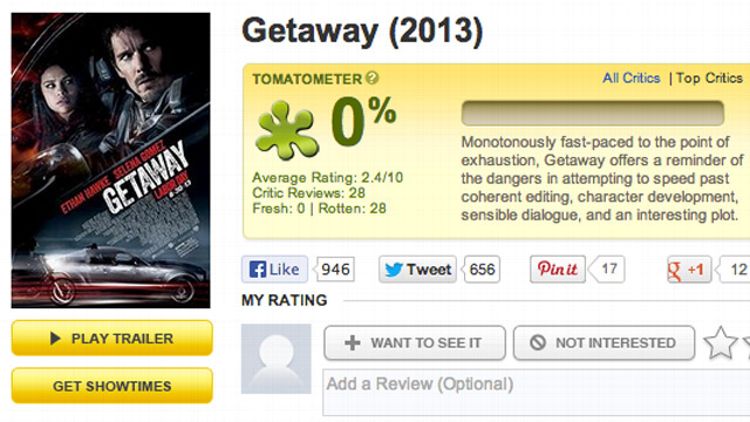 It is currently 83 degrees in New York, 450 degrees in Los Angeles, and 800 in many parts of the Midwest. It’s either too hot to breathe or about to thunderstorm until Tuesday. I can’t think of a better place to be this weekend than in a cold movie theater with a bunch of strangers, alongside of whom you can revel in hate-watching one of the worst-reviewed movies in recent memory, Getaway. Yesterday The Wrap reported that the Ethan Hawke–Selena Gomez flick might be a rare dud, one that hangs onto its perfect 0 percent Rotten Tomatoes score, but then some kindhearted soul praised Ethan Hawke’s performance (in contrast to Gomez’s alternating “petulance and indifference”) and Getaway can now boast a 2 percent rating with 87 reviews. Here’s Peter Travers dropping the mic: “Selena Gomez, looking like a Munchkin in a hoodie [Editor’s note: like a GIRL in a Hoodie? I thought so. Join us, Selena], tries to steal the car at gunpoint. Why? Because the dumbass script told her to. Why does she keep calling Brent and everyone else in the movie an asshole? Because she’s right. For 89 minutes that feel like 89 hours, cars speed out of control and crash doing only PG-13 damage. The damage to your brain while watching it is incalculable.”

The Right Reasons Podcast: The Challenge, Below Deck, and Lamar Odom