Afternoon Links: How the Internet Ruins Everything 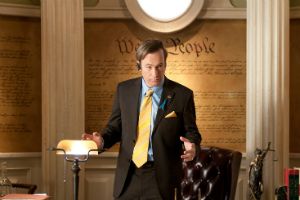 Grantland contributor Richard Rushfield wrote a treatise on how group Internet experiences (like the Breaking Bad premiere) are affecting how we digest our media, suggesting that maybe we’ve taken things a little too far: “Sharknado represents the internet now creating material for itself to mock … The camp fun of watching old disaster films was mocking the dead serious overacting and unintentionally hamfisted actions. Now at Twitter’s demand, networks are producing intentionally hamfisted and overacted pieces so the internet can tear them apart. They are even letting us — in a contest — pick the name that we find most mockable. So we pick the thing we most want to rip to shreds, like a school bully making a nerd dress up in the most ridiculous costume, so we can make fun of him for wearing it.” At least now that we’re getting closer to a universally synched Internet of Things, maybe we can hope to create illusions of togetherness during these virtual get-togethers, cuing up our thermostats en masse and piping each other’s dinner smells through a wireless router. Just a whiff of human contact, nothing excessive.