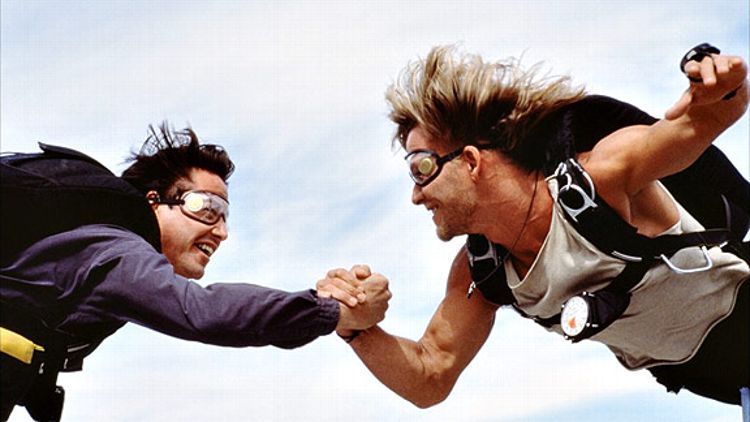 Patrick Swayze passed away two years ago tomorrow and yet his spectral presence is still felt in Hollywood. The reason? Everyone keeps remaking all of his movies! Perhaps serving as proof that the poor man should be allowed to rest in peace, none of these projects seem to be particularly successful. Finally scheduled for release later this year is Red Dawn, a troubled re do of the classic-ish Soviet-era scare flick — only this time the villains are Chinese. Or at least they were Chinese until Hollywood remembered where most of their emerging overseas income originates and the bad guys were changed to North Korean in post-production. (Thanks, Industrial Light & Racism!) Next on the horizon is a presumably faithful remake of Dirty Dancing, directed by the original’s choreographer, Kenny Ortega. Word of this new attempt at putting Baby in the corner was greeted by, in the words of ABC News, “outrage” (sample reaction tweet: “DIE IN A FIRE, MOVIE INDUSTRY.” Discourse!).

Then, late yesterday, came news that Swayze’s most cultily beloved cult flick, the Zen-bubblegum bank-robbing surfer movie, Point Break, is also due for a reboot. Deadline reports that Alcon Entertainment is developing a fresh take on the as-insane-as-it-was-twenty-years-ago story with screenwriter Kurt Wimmer, who also penned the upcoming remake of Total Recall. The twist? Instead of surfing, the new film’s hopefully stone-faced FBI agent will infiltrate a criminal gang of extreme-sports enthusiasts. (Great idea! What could possibly go wrong?)

Clearly the key to Hollywood’s financial malaise is more Swayze. With that in mind, might we suggest green-lighting a remake of his finest hour, as the Ivy League–educated bar bouncer in Road House? The throat-ripping Dalton is the role Channing Tatum — who, like Swayze, has a history of stripping — was born to play. Throw in Olivia Wilde as the blank-eyed, impossibly pretty small-town doctor, let Ben Kingsley and Anthony Hopkins fight over who gets to borrow Ben Gazarra’s slumming boots and play the evil developer, see if Josh Gad can grow a straggly beard to play the hillbilly henchman, and cast Andy Serkis as the stuffed polar bear that crushes said henchman to death. Box office gold!

That leaves Swayze’s most successful film, the tear-jerking Ghost. Considering actress/replicant Demi Moore still looks exactly the same decades later, why not give her another spin on the pottery wheel? She may not actually act anymore, but she certainly doesn’t age. Let Ashton be her otherworldly soul mate, because why not. As for the new Oda Mae Brown, the sassy psychic part that inexplicably won Whoopi Goldberg an Oscar? Tyler Perry, break out the Spanx and clear some room on your mantlepiece — it’s trophy time!

Nas to Write an Autobiography, Too